Using treats as rewards, a corner shop in Istanbul has sparked a passion for reading for neighbourhood children 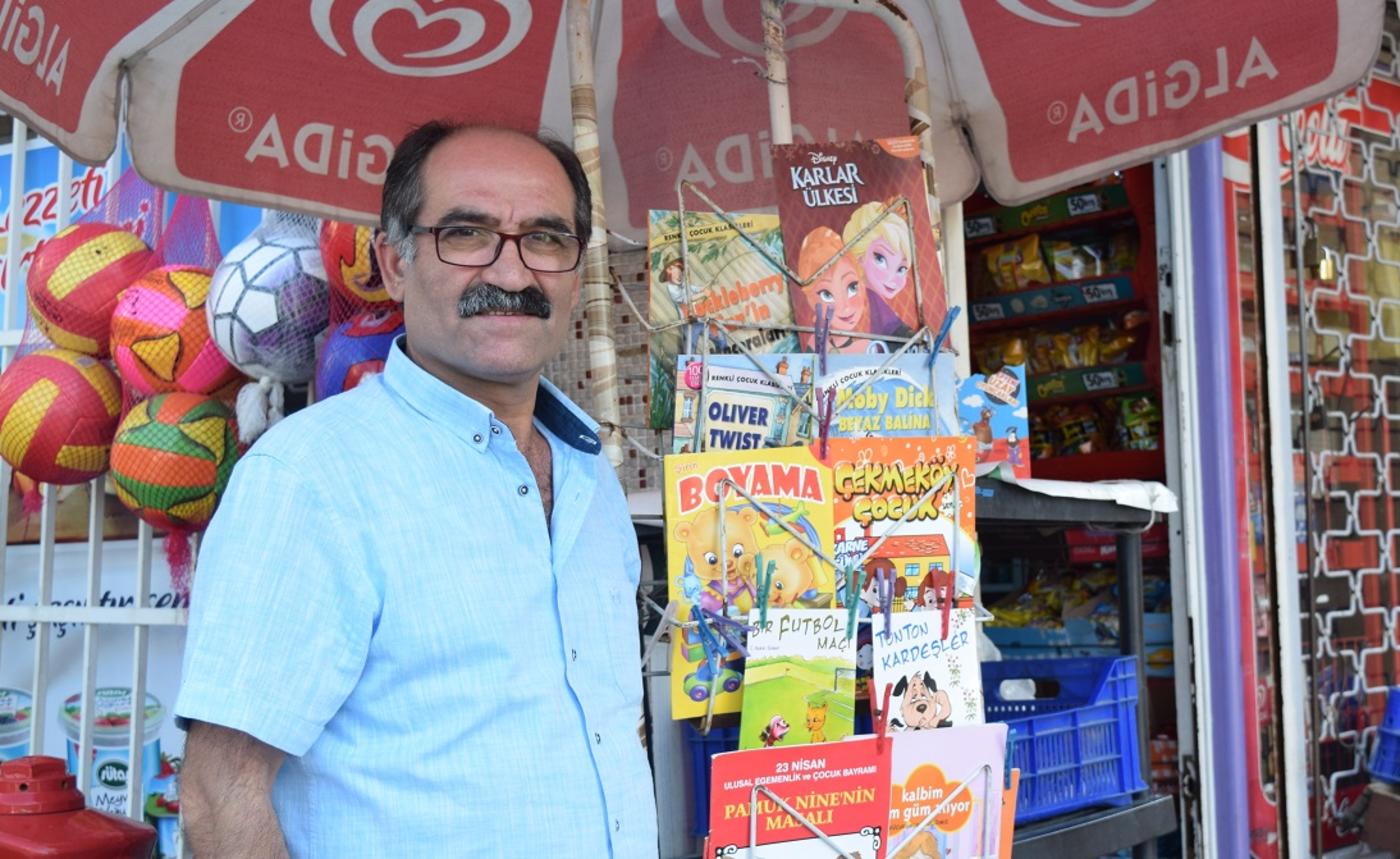 “I am filled with joy when I see that the first stop for these kids after school is my shop,” says Kanber Bozan's (MEE/Suraj Sharma)

ISTANBUL, Turkey – In a narrow alley on top of a steep hill in the Uskudar district Kanber Bozan, 49, runs a corner shop.

Reading is the most precious gift we can give our children

In the low-income and un-gentrified area, Bozan sells the usual array of basic daily products such as fruit, vegetables, chocolates, crisps and a myriad of other things, but he also stocks children’s books.

They are prominently displayed on shelves facing the shop window, but the books are not for sale. Essentially, he runs a local library for the neighbourhood kids - yet it is a library with a twist.

For every book the kids read, they get a treat in return. There is high demand for chocolates, crisps and juices, but they can choose anything available in the store.

“I am happy to help in any way if it gets our children to read and develop a love for it. Books are precious and reading is the most precious gift we can give our children,” Bozan told Middle East Eye.

Turgay, 10, told MEE that he had read five books over the summer.

“It is fun. I read the book, then explain what it was about to uncle Kanber and get to choose something for myself,” said Turgay. “I usually choose chocolates. Uncle Kanber also gives me more chocolates for each book, not just one.”

Bozan does not run the project with strict discipline and often gives the kids more treats than earned, but he has no intention of letting it turn into a farce either.

Before choosing their treats, Bozan makes sure the kids sit down and give him an oral summary of the book they have completed.

‘Books are a great treasure’

Bozan’s deep respect for books goes back to his own difficult childhood in his impoverished hometown of Adiyaman in southeast Turkey. After completing the fifth grade, a 14-year-old Bozan left his family and came to Istanbul looking for employment because his family could not afford to provide for him.

There were no job opportunities for him in his area either, so he did not have much of a choice.

Too proud to stay with relatives in the capital, Bozan found employment as an errand boy at a tailor shop producing ready-to-wear clothing. He worked for most of the day and was given a place in the workshop’s loft to sleep.

His employer was a former teacher who encouraged him to read during his free time. Books became Bozan’s escape from the hardships and monotony of his life.

Limited free time meant Bozan was often unable to spend as much time immersed in his books as he would have liked. Despite this, his longing and love of books remained strong.

“Reading helped make life bearable. I realised books are a great treasure and that feeling has never left me,” said Bozan.

Later in life, the importance of books would again come to the fore for Bozan. When his son Firat was born, financial difficulties pushed Bozan to travel to Europe and work there for five years in different jobs. Not being able to return for visits during this period, Firat grew up alongside his mother.

When he returned, he found that he lacked a bond with his son. After consulting with behavioural psychologists and friends, the most effective advice he got was to read with his son and discuss what they read. Book by book, this approach worked well and it strengthened their relationship.

It was Firat, now 24, who played a pivotal role in the idea of turning part of his shop into a library. Today, Firat is a drama and theatre student at an Istanbul university.

Last summer, Bozan left Firat in charge of the shop for a few afternoons. Later on, in his absence, kids would constantly come in asking where Firat was.

Surprised, Bozan asked Firat why the neighbourhood kids were always asking for him.

“Firat told me he spent his time behind the counter on those afternoons reading books. The kids, who looked up to him, wanted to imitate him. And he decided to increase their interest by offering them free chocolates for reading,” said Bozan.

Last summer, they started off with 10 books. Now, as news of the project has spread, they have 2,000 books that have been sent to them from all across the country.

Firat brought a few books into the shop and allowed the children to borrow them in exchange for free treats. Fascinated with the concept, Bozan decided to expand the initiative.

Firat asked his university friends to provide children’s books. Last summer, they started off with 10 books. Now, as news of the project has spread, they have 2,000 books that have been sent to them from all across the country.

Hoping to spark similar initiatives, they have started contacting corner shops in various villages across Turkey and are forwarding books to them.

Ruzgar, who just turned six last month, was unwilling to miss out - despite being unable to read.

Last summer, he was the scourge of the older neighbourhood kids. When they saw him approaching in his determined fashion, they would scatter in various directions. Anyone unable to flee in time was hauled in, made to sit on the curb and teach Ruzgar how to read.

“I finished three books in the summer and got many chocolates in return,” he said, as Bozan corrected him, saying he had completed three colouring books, including some exercises and puzzles.

Ruzgar, who started school this September, is already dreaming of more rewards for his academic success.

“I want a bicycle when I get my first good report card,” he said. “And for uncle Kanber, I will give him a chocolate for his help.”

‘Kids are the future’

The parents in the neighbourhood are also grateful to Bozan.

“I tried everything to get my kids to stop playing on phones and other computer screens. Nothing worked. Kanber has performed a miracle. Many of us are really pleased,” said Emine, a mother in the area.

I tried everything to get my kids to stop playing on phones and other computer screens. Nothing worked

Other parents have offered to financially reimburse Bozan for the treats he gave away to the kids, but he turned them down.

Bozan explained that he could make additional revenue of around 300 liras ($80) a month if he stocked the shelves with food products for sale, rather than books, in addition to 10-20 liras ($2.7-$5.5) for the children's treats.

“If it was about money, I wouldn’t do this in the first place. Getting our kids to read is worth all the money in the world, not just these few liras,” he said.

Bozan believes these kids were often put off reading in school because they found it to be a tedious chore.

“I am filled with joy when I see that the first stop for these kids after school is my shop,” he said. “Yes, the treats might be the main attraction, but if it leads to an interest in books and reading it can only be good.”

The first stop for these kids after school is my shop

Bozan said his reward was seeing that the initiative has become popular in the neighbourhood.

“These kids of ours are the future and we have to do what we can to make it better for them. Every time one of these kids takes a book, I remember my 14-year-old self who arrived in this huge city with only the rubber sandals on my feet, and how books made it easier for me.”

Books
Palestinian writing: Maps redrawn, futures reimagined
Books
Saints, scholars and queens: The women who helped forge Islam
Books
The Frightened Ones: 'I sometimes miss fear because it became a way of living' Heritage
Listening to Istanbul: Preserving its past and present through sound 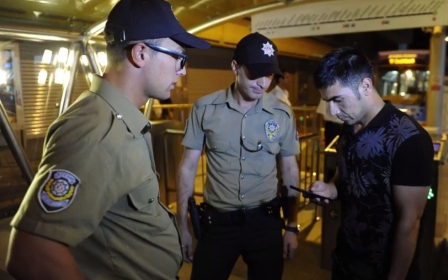