The Palestine Riders - biking through the Holy Land 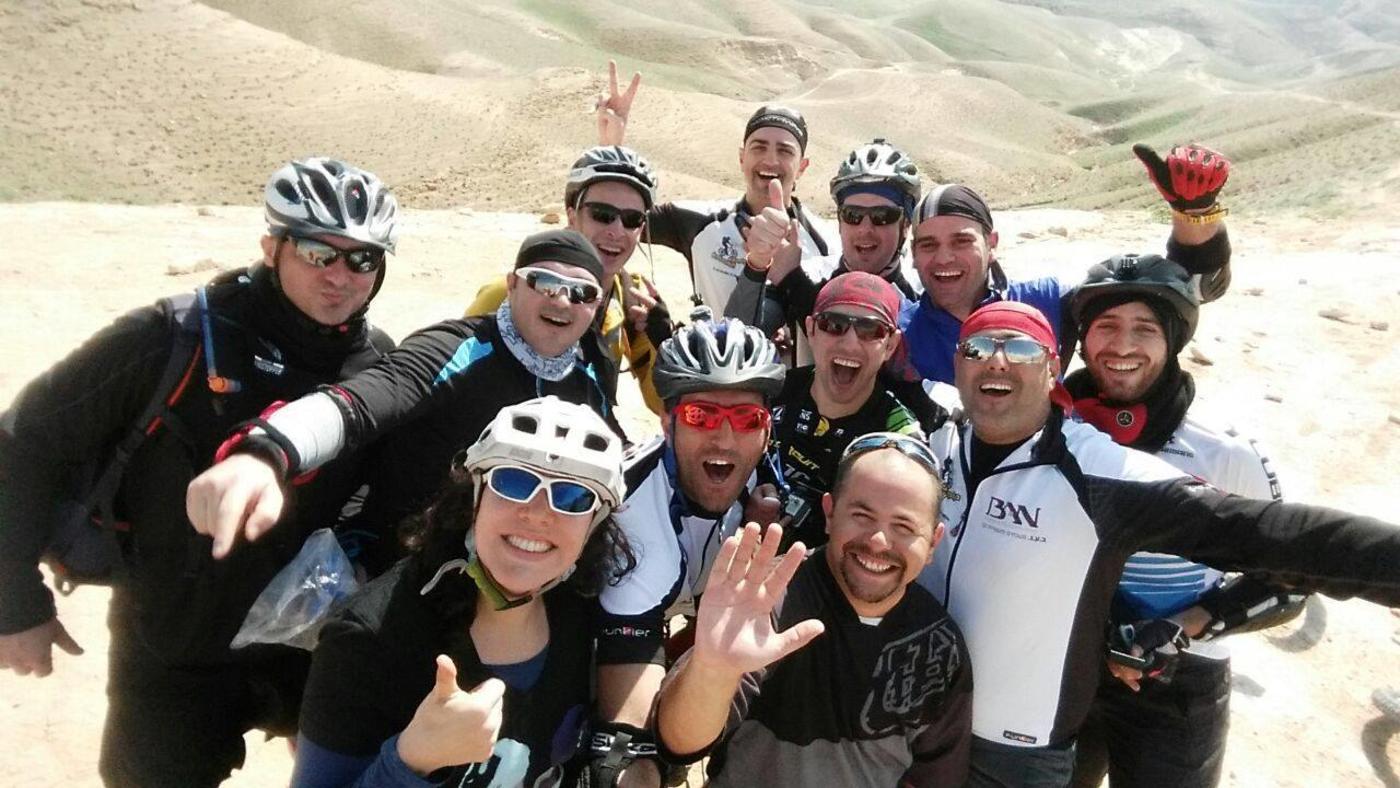 RAMALLAH, West Bank - Ramallah is a city in the West Bank surrounded by hills. The landscape around it is crowded with terraced olive groves, boulder-strewn ridges and winding roads where yellow buses swerve toward their destinations. At its edge white buildings file off in lines toward the green of the natural landscape.

On a spring morning earlier this month, a group of locals set off to explore the countryside in a way that's unusual in Palestine: by bike. Heading down Ramallah's steepest hill, the group rumbled down rutted dirt tracks passing almond blossom and abandoned stone buildings; stopping for sweet tea at local beauty spot Ein Qinya before returning home uphill, traversing a tough incline over rocks and stones.

The ride is challenging, but was relatively easy for most of those who took part. They're all members of Palestine Riders, a group of enthusiasts who, for the last few years, have been quietly building a movement around mountain biking in the West Bank. Its riders – who number between 15 and 30, depending on the track they're riding – now meet most weekends to bike on some of the toughest and most beautiful routes in the region.

Mohammed Zarour, one of the first members of Palestine Riders, now goes biking whenever he's got a spare few hours on weekends or after work. The 28-year-old bought his first bicycle in Nablus, his hometown, in 2008 and started mountain biking seriously a few years later. Then as now in Palestine cycling was unusual, and Zarour didn't have much guidance about different ways to pursue the sport.

It was when he was forced to turn back from a mountain track at 6am – after arriving with an old road bike and wearing jeans – that he was compelled to do some serious research into riding. It didn't take long for him to get completely hooked.

“You can’t imagine what my face looked like after the first ride,” he told Middle East Eye. "I didn’t want it to finish. It was too hard, a really long ride, and I was out of water for the last quarter. But I was enjoying it so much, like a little kid with his new toy.”

Now, Zarour spends every weekend mountain biking, and he's attracted a small but growing contingent of converts to the cause. Wael, a local businessman, is among them. In the past, he says, he felt anxious about how a bike would be perceived by colleagues and friends, and being part of a group like Palestine Riders gave him confidence.

“People here look at a bicycle like a toy – they think that if you’re riding a bike you’re like a kid,” he explained. “I even thought that too, at the beginning. But when I joined the team I felt like I broke through a wall of being shy with the bike. There's a form of support when other people are doing it.”

The confidence, too, has set the riders on a raft of new adventures. The West Bank's geography is small but varied: from olive groves to moonlike cliffs and craters that fall toward the Dead Sea. In one video, captured on the GoPro camcorder the team now take on every ride, bikes cling to the edges of Wadi Qelt, a gorge close to Jericho which hides monasteries and hermitages in its lush green riverbed and sand-coloured cliffs. The drop, inches away from the riders' wheels, is stomach-churning.

In a landscape so often viewed through the lens of political treaties, movement restrictions and violent land seizures, many riders find it refreshing to navigate Palestine on two wheels, with an eye to nothing but beauty and adventure. But that doesn't mean biking take places in a political vacuum, and occupation still makes itself felt in sport. Many of the tracks in the West Bank are inaccessible to Palestinian riders, and restrictions can prevent some individuals from travelling freely in Area C, which covers most of the natural wilderness.

“It’s very nice discovering these new parts of the country, and very sad when you see the areas of your country that you don’t have access to. We can’t travel down some tracks in the West Bank, even if it’s on Palestinian land. If the track starts off at a settlement we can’t go inside to the track's genesis,” Zarour explains. “You don’t see many Palestinians going into nature areas to discover the country either. They think it’s not safe. My family always ask me to stop riding because they worry for my safety– that's because it's close to settlements and they worry I might be kidnapped or attacked.”

Unlike most of the other riders, Zarour has permission to enter Israel through his job with an NGO. But as he explains, getting to Jerusalem with a bike comes with its own problems, too.

“The checkpoint at Qalandia has two parts, one for cars which only Israeli IDs go through, and one for Palestinians with permission,” he explains. “I can’t take my bike through the part for Palestinians, so I have to go with the cars. But I’m not allowed to do that either because I'm Palestinian and I don’t have Israeli ID.”

As a result, going through the checkpoint is usually a gamble: sometimes a sympathetic soldier might arrange for a bus to take Zarour's bike to Jerusalem, other times they might be uncooperative. At 6am on new year's day, Zarour and Wael drove for two hours to a checkpoint to visit friends in Nazareth. But when soldiers said they didn't have the equipment to check bikes, they were forced to go back to Ramallah.

In all, Zarour estimates about half his attempts to cross the checkpoint are successful; the rest of the time he's sent back to Ramallah, disappointed. “It makes me feel really frustrated,” he says.

Such infuriating obstacles, however, haven't stopped the Ramallah riders from making connections with Palestinians on the other side of the wall. Last year, Palestine Riders connected with another Palestinian mountain biking group from Nazareth, in the north of Israel, and the teams clicked immediately. Now they regularly ride together in the hills around Jericho and Jerusalem. Those that have access ride in the Golan Heights or the southern Naqab desert.

“Interacting with other riders is always great. You get to know new tracks and more great people, and with time you get to be good friends,” Rami Aboud, a biker from a town close to Haifa and Nazareth, told Middle East Eye. “It's great to keep the connection between the Palestinians inside and those outside. And what better way to do it than practicing a mutual sport.”

Joint expeditions have moved beyond biking too. On a recent ride Aboud met groups of Bedouin living in camps with minimal shelter, and later arranged for friends to donate clothes and blankets. He'll deliver them to the communities, by bike, later this month.

Jobran Mansour, a trainee surgeon from Akka, is part of a cycling group that includes both Jewish Israelis and Arabs as well as Palestine Riders, and he too hopes that mountain biking will help him meet Palestinians from the West Bank. In the past he's rarely socialised with communities from the other side of the wall; now when he tells his Jewish friends about Palestine Riders, he says, they're surprised that the sport is available in the occupied territories.

“I am an Arab from Israel. For me there is no difference between us and those who live in the West Bank. It's just by luck and destiny that my family was on this side of the fence,” Mansour says. “I hope that one day we will have one big group of riders from every side of all of the fences riding the routes of this land between Lebanon, Jordan and Egypt. Hopefully the wheels of our bikes will drop the separation barrier between Israel and Palestine.”

For Zarour, cycling in Israel can be troubling: he often feels guilty about the fact that he's able to cross the wall while others can't. It's been revealing with regard to the history and politics of Palestine, too. After riding past settlements or through new villages, he always takes time to look up locations and read more about them.

“Last time, I went riding in the north, around Acre, and I passed a destroyed village,” he says. “I’d never heard about it. It was destroyed in 1948 – it’s really very sad when you see the destroyed village, when you read about how it used to be before and what happened in the war.”

But while his experience has exposed challenges, mountain biking has been liberating and exciting for Palestine Riders – and it's become all-consuming for many enthusiasts. In the last year, Zarour has become an evangelist for the sport, and he hopes to expand it even further. So far, it's going well: Zarour has appeared on local television, the group has had success in recruiting female bikers, and the number of people participating in rides is climbing.

“The feeling you get when you go up in the mountains, the smell, it’s like nothing I’ve ever seen before,” Zarour says over arguila and tea at a Ramallah cafe. “A few years ago I always wanted to leave the country. I’ve never seen myself here. I always just wanted to live in another place. But when I started doing this sport, I really fell in love with it. I started encouraging people to do it, because we see hundreds of Israelis who go for sports in a way that makes the most of the landscape, and all the time we’ve been the only Palestinians there. I've really fallen in love with the nature here.”