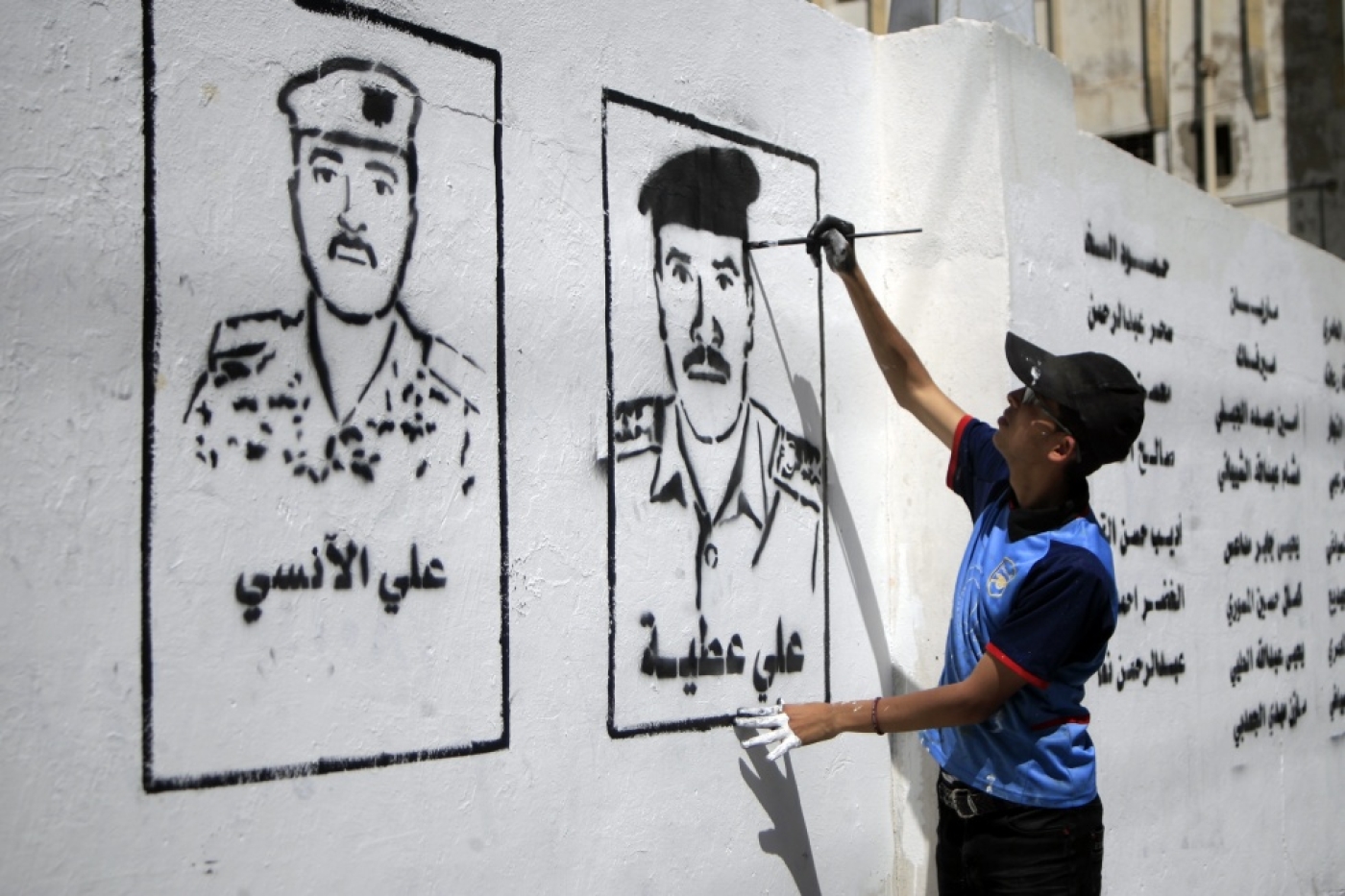 "Yemeni President Abed Rabbo Mansour Hadi has set up a committee to investigate Spain's loss to Brazil in a World Cup match. The findings accused former President Saleh of setting Spain up."

This is not a real line from the news, but rather a Yemeni political joke, spread in the political circles and Qat chews, mocking the continuous establishment of random committees to investigate various issues, without yielding any results. At the same time, this joke reflects the way the current government is dying to throw anything on the former’s shoulders, accusing it of hindering the transition and stability.

Currently, the most famous joke, though not political, is one that wishes Ramadan was like the World Cup; once every 4 years and Yemen has nothing to do with it, except watching it on TV.

Political satire in Yemen constitutes the most common and effective political weapon, and is perhaps the only allowed medium to criticize the performance of the authorities and various political parties. Jokes are an outlet for many oppressed citizens who have mastered the art of humour, knowing that some of them have hit stardom within society, as social media sites facilitated the spreading of their scathing comments.

It is hard for any event in Yemen -  where general or political -  to avoid being the subject of jokes. Recently, Yemeni author Mansour al-Jaradi published a book, documenting scores of jokes that surfaced during the Yemeni revolution.

In past decades, when politicians were largely immune to criticism by the public or media, due to the security clampdown, satire was the only weapon that everyday citizens had, and security agencies could not deal with jokes as any other political tool. Furthermore, every time there was news about death and violence, Yemenis would resort to jokes to run away from the gloomy news.

Some Yemeni areas became famous for their satire, such as the province of Dhamar, known as the “factory of political jokes” in Yemen. The mockery made by the province’s residents do not even spare Dhamar’s governor, let alone political leaders and presidents.

Jokes and scorn are the only two things that residents take seriously, and are considered their main medium to communicate their political messages to the government and politicians in general.

One time, a visitor to Dhamar witnessed traditional Yemeni funeral, whereby the “body” -  wrapped in loose cloth - was put in a wooden casket carried on the shoulders of funeral pallbearers. And since Yemeni religious culture requires people to participate in any funeral to “win the reward of God,” the young visitor joined the funeral. When he asked about the parents of the deceased, they told him it was a funeral for the foundation stone of a university that was supposed to be built in the city. The president had laid the stone at a ceremony years ago, but work on the university had yet to be launched. Thus, residents considered it a “dead project” that should be buried. A similar occurrence took place when the value of the currency against the US dollar plummeted. Some residents held a mock-funeral for the Yemeni riyal after they learned it had no buying power.

The youth revolution in Yemen in 2011 involved its share of satire, which only increased with the severity of the authoritarian crackdown. The latter made people even more distressed about Saleh’s renunciation of power.

Although the new government was formed as a result of the youth revolution, the youth are currently absent from it. In light of this, someone commented in the form of a news headline that read, “The republic has issued a decision today to raise the age of ‘youth’ in Yemen to 60 years, and these youth are handling all the portfolios in the new government.”

Another person called the elderly government the “Toyor al-jannah government,” referring to the name of a children’s channel.

After the announcement that Yemen was being divided into six regions, paving the way for the transition into a federation, a prominent Yemeni politician commented: “Yemen is actually now a seven region country, but the seventh region was given to Benomar as a tip for his efforts in the deal.”

In some recent jokes, some called the Azal region, which stretches to areas that are known for their abundance of weapons, the “region of talents.” They called the Saba region, which includes Maarib and al-Jawf, whose citizens are responsible for most of the kidnappings in Yemen, the “kidnappers’ region.”

The Janad region, which includes Taizz, a city that thrives with intellectuals and politicians, was given the name the “activists’ region.”

President Hadi’s advisor, Major General Ali Mohsen al-Ahmar, has a reputation for taking over territories, even if illegally, and then erecting a wall around them and considering them his own. As a result, he was the subject of many public comments in public places – especially in the south, where most land disputes are, along the following lines: “When asked about the best nation in the world, Ahmar answered with China. When asked about the reason behind his answer, he said, “Because it is already walled.”

Some people – even prominent writers in their Qat sessions- nicknamed the former minister of interior Abdulkader Qahtan the “18+ minister” because, during his rule, the security institutions increased their campaigns to pursue alcohol traders and Internet cafes that allow users to access pornographic content. Meanwhile, those institutions failed to end the security chaos and arrest those carrying out attacks against electricity lines and oil pipelines and the assassins of dozens of officers.

The weak governmental performance, especially in terms of providing citizens with essential and basic services, which are often of mediocre quality, triggered several sarcastic jokes, comments and even caricatures. Imitating the prayer time on local channels, someone drew a photo showing an armed man with a banner beside him that read, “It is time to cut the electricity lines, according to the local time in Maarib.”

This was in reference to the repeated and regular attacks against electricity lines, the perpetrators of which have not been punished. In the same context, the name of the energy minister, Saleh Samea, was twisted to Saleh Shamea (Shamea is the Arabic word for candle). Moreover, due to the slow Internet service in Yemen and the governmental monopolization of this industry, which kills any chance of a competitive and quick service, Internet was referred to as “Inter-not”.

Recently, Yemen Shabab (a local TV channel ) cancelled one of its night shows and instead had a line on its screen saying “we apologize to our viewers, we can’t broadcast the show tonight due to electricity shortcuts and the absence of diesel in gas stations.” The channel’s decision to play a dark screen for an hour, instead of the show, was a strong example of the use of irony in Yemen to over go some of the worst crisis like the fuel and power shortcuts Yemen is going through now.

Another joke spread in social circles and specifically in long lines at gas stations when people waiting for gasoline during the fuel-shortages is   “A man bought a fish to cook at home. When he gave it to his wife to fry, she said: ‘We are out of oil, and you haven’t gotten paid yet.’ So, he said, ‘Grill it then.’ She answered, ‘We are out of gas, and there is no gas in the country.’ The fish laughed and went back to the sea, saying, ‘God protect our government.’”

The armed Houthi group insists that it is a civil group adhering to dialogue, although it is effectively fighting fierce battles by using various weapons on the ground. Inspired by the discrepancy between the group’s rhetoric and its actions, somebody mockingly described it as “Salama Dynamite Shop” (“salama” means “safety”).

Despite the dire situation Yemen finds itself in, political satire lives on and targets every political party and figure. It is enough for politicians to keep doing what they are doing so that such humour can continue. It is an inexhaustible and unstoppable weapon that spares no one.