Istanbul has become one of the main hubs for African football players seeking careers in Turkey and Europe, but very few succeed 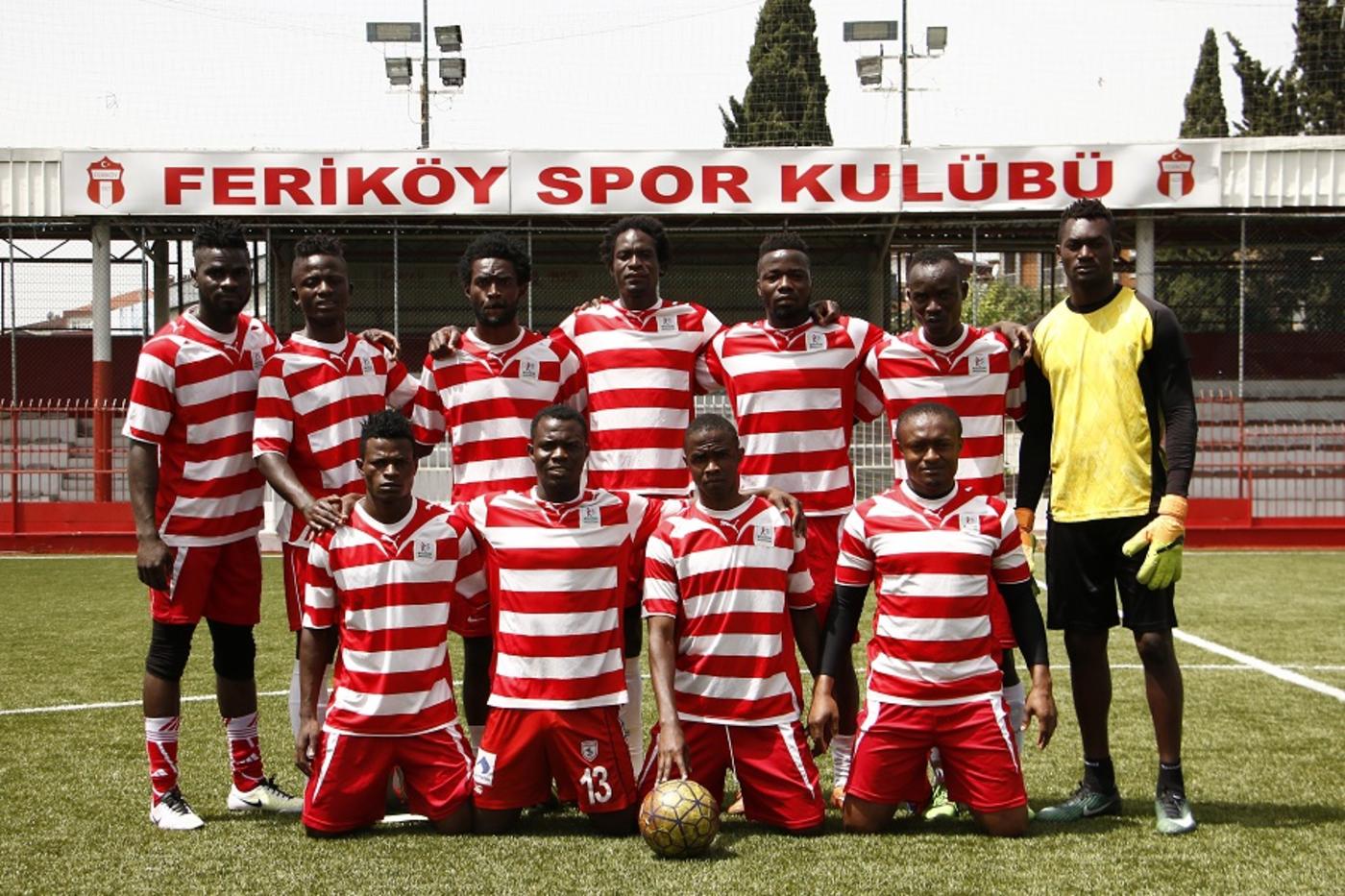 ISTANBUL, Turkey - “My father gave me all his savings to help me come to Istanbul. He knows I am good at football and the whole community is watching me,” says Alex Epome, a 17-year-old footballer from Cameroon.

Thanks to good airline connections to Africa and flexible visa policies, Istanbul has become the main destination for those who dream about better wages and a career in Turkey, a gateway to Europe.

Last year, Alex was a second division player with a local team in his home country. Hoping to provide a better future for his family, Epome packed up everything and moved to the shores of the Bosphorus in pursuit of a professional football career.

“What I earned in Cameroon was just enough to buy bread. I had to walk to the training [field] as I couldn’t pay for the bus ride,” says Epome. “For me any club would be great. I do it for my family, with the help of God,” he adds.

According to Bertrand-Joseph Ndong, Epome’s agent and a former Cameroonian coach, a fourth division player in a Turkish club earns an average of $8,400 a year, in comparison to a few hundred dollars in any African club.

Epome is now training to compete in the African Cup of Nations, a friendly tournament that takes place every year in the central neighbourhood of Ferikoy.

But this year the municipality of Fatih, which has funded the tournament for a few years, withdrew its funding due to the state of emergency and other security concerns, according to Ndong, who is one of the main organisers of the event.

In 2016, Turkey was hit with a series of bomb attacks that killed at least 385 people. In April 2017, Turkey extended its state of emergency for three months, its third such extension after a coup attempt last July.

However, the organisers say they will still go ahead with the tournament taking place on 24 June. "We will still organise it anyway,” explains Ndong, adding that each competing team will have to contribute around $140 to fund the event.

But other African players have not been as lucky as Epome, lured by illegitimate agents claiming strong ties to Turkey and based on void promises of fame and financial stability.

In 2008, 27-year-old Pascal Eneh gave up his career as a midfield first division football player in a Nigerian club to pursue a professional career in Turkey. An unofficial recruiter from Nigeria convinced him that he had a shot with the football club Muglaspor, in southwest Turkey. He was affiliated with a Turkish manager who had helped gain the trust of Eneh, who paid him $2500 in advance. "After three days in the hotel [in Mugla], [the agent] disappeared - he had dumped me,” Eneh says. Yet returning to Nigeria was out of the question for Eneh. “I was in Turkey already, I had to try,” he adds.

'What I earned in Cameroon was just enough to buy bread. I had to walk to the training [field] as I couldn’t pay the bus ride'

In 2016, after years of trying to get recruited, Eneh decided to start coaching other aspiring African football players, after realising that he was too old to start a professional football career.

For a small commission, Eneh usually conducts his training sessions three days a week in a public football field in the working-class neighbourhood of Kurtulus. To make a decent living for himself, however, he does other odd jobs on the side.

Since going back to their homelands empty-handed is associated with shame and failure, players like Eneh who are stranded in Turkey usually decide to stay.

"If I don’t succeed, my family won’t either. My father’s dream will be wasted,” says Epome.

‘If I don’t succeed, my family won’t either. My father’s dream will be wasted’

To complicate matters more, many risk staying in Turkey with expired visas. If they are caught by security forces, they are arrested and sometimes deported.

Germain Blaise Mbeh regrets staying in Turkey since he arrived in May 2015. He constantly considers moving back to his home in Cameroon, but admits it is difficult to actually go through with it.

“If I fail, my family will be disappointed,” says Mbeh.

He initially travelled to Turkey for a test match in Bursa, in the south of Istanbul, but the match never actually took place.

"When I tell Africans that Turkey is difficult, they don’t believe me,” explains Mbeh.

Mbeh decided to stay in Turkey and depends on earnings his family sends from a small family business back in Cameroon. He is now training with Eneh for the African Cup of Nations in hope of getting recruited by a Turkish team.

A twenty-two-year-old Nigerian footbal player going by the name of *Stanford had a similar experience to what Eneh and Mbeh went through. Coming from Port Harcourt in southern Nigeria, he landed in Istanbul in 2014 after playing for mediocre local clubs for a few years.

“When I arrived, the test never took place,” Stanford adds.

Clement Lopez, a migration researcher at the University of Paris-Sud, told MEE that most illegitimate agents depend on verbal agreements and persuasion, although some use fake invitations from clubs.

"Usually a lie well told can convince a player who has high hopes to leave to Europe, [and who] totally lacks lucidity; same for the families,” he says, adding that they also take advantage of inexperienced, naive players.

According to Lopez, controlling recruitment and preventing scams is difficult. Legitimate recruiters should have an official licence from FIFA, the body that runs world football, and they should never be paid in advance by the players.

To be able to survive in Turkey, many players have to juggle between a strict training regimen and work.

Stanford landed a gig singing hip-hop and performing shows imitating Michael Jackson in clubs and churches on weekends and evenings, while he reserves his mornings for training with Eneh. This helps him pay rent for the tiny flat he shares with four others, deep in the basement of a crumbling building in Kurtulus.

The flat has no windows and no ventilation. The air inside is thick and mould stains the walls.

Mbeh says that finding paid jobs is difficult for Africans.

“The only jobs we can find here are difficult and barely paid, if paid at all,” says Mbeh.

‘I put on my music and let it fly’

Racism is another recurring issue the African footballers face as they try to make it in Turkey.

"I never fought in my life until I came to Istanbul. I don’t want it but some people are constantly bullying me,” says Stanford.

When they call you 'Negro': Egypt’s Sudanese are prisoners of racism
Read More »

He recalls one night on his way home from work when a group of people attacked and robbed him because of the colour of his skin.

“I had to beg them to let me at least keep my shoes,” he says. “It was humiliating.”

Mbeh says he has often been called a “negro,” compared to a monkey and told several times to go back to his country.

“Racism is the worst thing here, it’s all the time, small things, insults, threats,” says Mbeh. “What can I do? I put on my music and let it fly.”

But on the football field, walls dissolve and racist slurs disseminate under the heels of a good game.

‘If you play well, they will love you,” says Severin Brice Bikoko, a football player with the Turkish team Kayseri Erciyesspor.

Bikoko is one of the African footballers that made it in Turkey after a lot of training and perseverance.

‘I wasn’t good enough for them’

In the early years of his career, Bikoko tried many times to join teams in Europe, but he was never selected. This included a test with Monaco for playing in the French championship.

“The reality was that I wasn’t good enough for them,” he explains. “When you fail, you should go back home and train harder to get better.”

Bikoko was eventually approached in Cameroon by a British agent licensed by FIFA.

A few weeks later, Bikoko started training with Kayseri Erciyesspor, a team in Turkey’s second division. He now has sights on Fenerbahce, one of Turkey’s best teams.

‘Many African players come to Turkey with the idea of starting a career, but some don’t have the level at all’

African players tend to underestimate the level of the Turkish football scene.

“I thought the level of the Turkish championship was low and that I could easily play in first or second division,” explains Dave Stewe, 18, from Cameroon.

After a year in Turkey, Stewe has scaled down his ambitions, as he has not been able to join a club yet.

“It is much harder than I thought,” he says, adding that he realised it very soon after arriving.

Stewe is now training with Eneh, but also studies international relations at Bilgi University, “just to have a plan B in case football doesn’t work”.

“Many African players come to Turkey with the idea of starting a career, but some don’t have the level at all,” Ndong says.

Nndong is currently training 20 football players at his training centre. They all wear the same jersey stamped with the centre’s logo.

"We only train people who have chances of being recruited,” explains Ndong, who organises regular friendly matches with Turkish professional teams so his players can showcase their skills to potential recruiters.

The players do not have to pay for training. If recruited, they give Ndong a percentage of their fee, which is usually around 10 percent.

Many of the players hope to be recruited following the African community football championship in Istanbul. According to Nndong, last year 200 players were recruited at the end of the event.

“I believe in my talent. I will succeed,” says Stanford.

*Some names have been changed for security purposes. 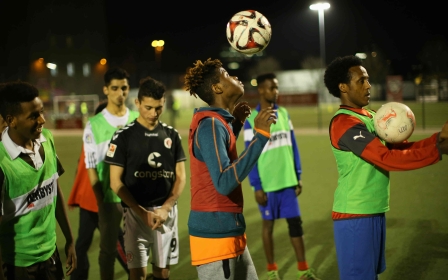 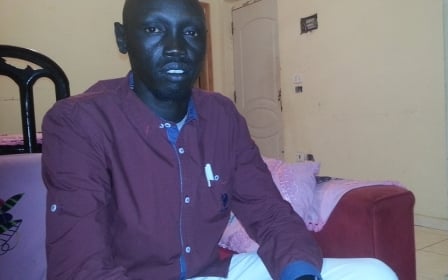