Boat captains tell their stories and use the boats that transported migrants to Europe, shedding light on their plight 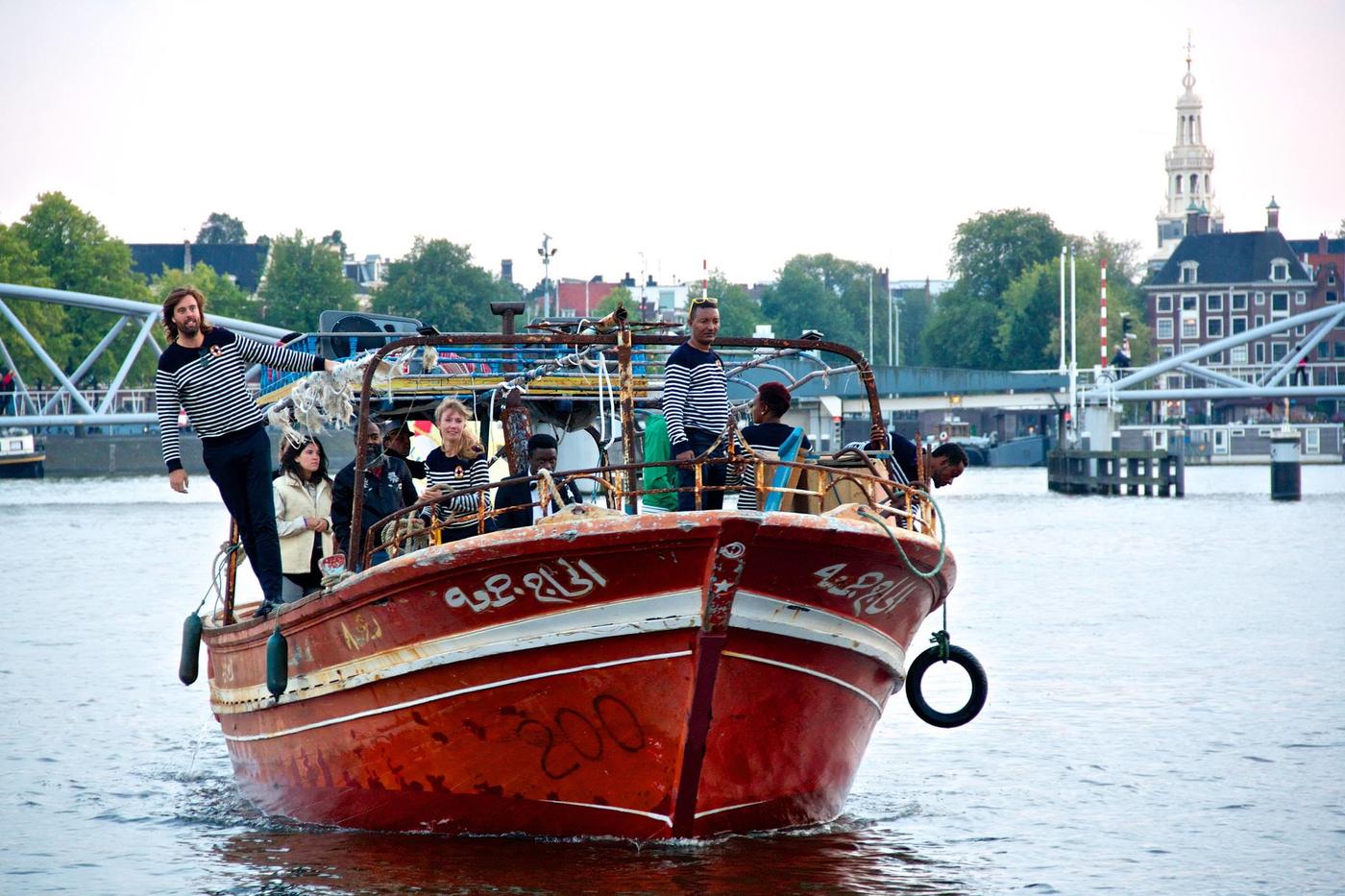 AMSTERDAM - The splotchy-coloured vessels that make up the two-boat fleet of Rederij Lampedusa canal tours are, in a way, on loan.

Sequestered by the Italian coastguard, and repurposed by their current Amsterdam patron, the Hèdir and Meneer Vrijdag boats have found new life far from where they originated - much like many of the men, women and children they transported across the choppy waters of the Mediterranean.

Once over-packed with migrants and asylum seekers, these boats acquired by Dutch founder Teun Castelein are now being used for daily cruises through the city's world-famous waterways for $20 per person.

Taking a ride on the Hèdir means plopping down on cushions - there are no benches - and listening to Syrian captain Mohammed al-Masri, along with others, tell not only their personal stories, but also those of the city dubbed the Venice of the north.

Sitting in a cafe on Amsterdam’s Haarlemmerstraat, Masri, who likes to be known as Mo, talks about his life before he began working on the six-by-2.8 metre wooden boat along Amsterdam’s canals.

The worldly wise and unstoppable 25-year-old from Damascus had only sailed once before captaining his beloved boat. To his good fortune, upon arrival in Amsterdam Masri received training by the Refugee Start Force, an organisation that helps migrants integrate into Dutch society, before he started his new job on the boat.

Masri loves to explain the meaning of Hèdir in several languages. In Arabic it is “the voice of the motor, in Tunisian dialect, the voice of a strong woman, and in Tigrinya (the language of Eritrea) it means the voice of the lion,” he said.

Amsterdam was a safe haven for immigrants fleeing wars, including Sephardic Jews from Portugal and Spain, and Huguenots from France escaping religious persecution

The Rederij Lampedusa collective that makes up the two-ship crew comes from Eritrea, Ethiopia, Syria and the Netherlands.

Comfortably seating 12 passengers, when the Hèdir travelled to the Italian island of Lampedusa, it held 76 people on board. The fleet’s bigger sister, the Meneer Vrijdag , carries 282 people at 12-by-four metres.

Like millions of others from Syria, Masri tread the road to safety when the conflict broke out in 2011 and then escalated over the last excruciating six years.

According to the international relief organisation Mercy Corps, Syria’s civil war has created the worst humanitarian crisis of our time. “Half the country’s pre-war population - more than 11 million people - have been killed or forced to flee their homes.”

A blind man and 11 babies

After fleeing Damascus and stopping in Lebanon and Jordan, he made his way to Istanbul, Turkey, and then to the port city of Izmir, on the country’s Aegean coast. When he finally made it to the Netherlands, over three years had passed.

“There were 78 passengers on the nine-metre boat I travelled on. That included one blind man and 11 infants…like really, tiny babies,” said Masri, after fondly looking at a baby at the next table.

“I was lucky to make it to Amsterdam. But now I have three-and-a-half years to make up for…lost time.”

“I couldn’t take seeing tiny snippets in the daily news, 200 words or so, dedicated to such a huge topic"

Masri was assigned temporary residence in Amsterdam by the Netherlands’ Central Agency for the Reception of Asylum Seekers (COA). Though he is an exceptional polyglot with Arabic, French, Spanish and Dutch under his belt, he still found the system to be perplexing at times.

Dutch national statistics point to a burgeoning intake of newcomers.

According to the COA, in 2015 “the population in the Netherlands grew by approximately 21 thousand Syrians, three thousand Eritreans and more than two thousand Ethiopians.”

It appears that the rising influx of refugee and asylum seekers has led the COA to increase staff to keep up, said Masri.

To help other asylum seekers navigate the red tape, Masri has set up an unofficial initiative called KanKane that assists refugees with the daunting tasks of clarifying asylum status, getting healthcare or finding housing.

But despite some of the administrative stumbling blocks that migrants encounter when taking their first steps in Amsterdam, Masri continues to say that he is “lucky".

How it all began

A new-life approach is precisely what Castelein and Masri hope for with the “sustainable” boat-tour initiative that began in 2015.

“We started off in 2015 with around three tours a week, 12 passengers per tour, and in the end, probably had several hundred clients our first year,” said Castelein.

The social artist and entrepreneur spearheaded the project after feeling overwhelmed by the lack of understanding and scant coverage of the waves of migrants washing up on Italy’s southern shores.

“I couldn’t take seeing tiny snippets in the daily news, 200 words or so, dedicated to such a huge topic. The daily loss of human life and tragedy was increasing every day,” Castelein recalled.

In Lampedusa, Castelein saw a boat graveyard littered with seized vessels and was struck with the idea.

“There were hundreds of boats, abandoned, unused and waiting,” Castelein said. “The coast guard and authorities were weighing options about what to do with them, since the owners aren’t actually falling over themselves to reclaim their boats.”

In 2015 alone, the Italian Coast Guard rescued some 950 boats carrying migrants to its country’s shores, according to the coastguard press office.

“The potential of migration is often completely ignored. I want to use these boats and the initiative to take that next step in understanding”

From there, Castelein dovetailed back and forth from Italy to the Netherlands and managed to convince two key figures - Mayor Giusi Nicolini of Lampedusa and Mayor Eberhard van der Laan of Amsterdam - that the boats could be instrumental in telling the former passengers’ stories.

The two restored wooden crafts made their debut during Amsterdam’s 2015 Sail Festival, when some of the world’s most glitzy and eye-catching boats are on display.

“It was a powerful statement. Glamorous vessels from everywhere floated by, but ours, in contrast to the sailing parade, seemed to cry out ‘let’s not lose our humanity!” said Castelein.

Navigating the waters of understanding

“The potential of migration is often completely ignored. I want to use these boats and the initiative to take that next step in understanding,” said Castelein.

Amsterdam is a city that thrives on centuries of diversity and immigration. “It was built on migration,” says Castelein.

The city was a safe haven for immigrants fleeing wars, including Sephardic Jews from Portugal and Spain and Huguenots from France escaping religious persecution. Others were drawn there looking for better opportunities.

When Castelein acquired the Alhajj Jumaa (now known as the Meneer Vrijdag), the name Prince Ali was also written on its body. Presumably the name or handle of the boat’s original owner, he will likely never show up to claim his vessel.

Technically speaking, the boats have just changed the jurisdiction of where they are moored. All of the upkeep, permits and maintenance fall on Castelein as custodian.

The Hèdir, its crew and the many migrants who have travelled on boats like it have found a way to have their voices heard beyond the choppy waters they once crossed in search of a fresh start.