After protests brought down the previous prime minister, Jordanians are back on the streets because they see nothing has changed 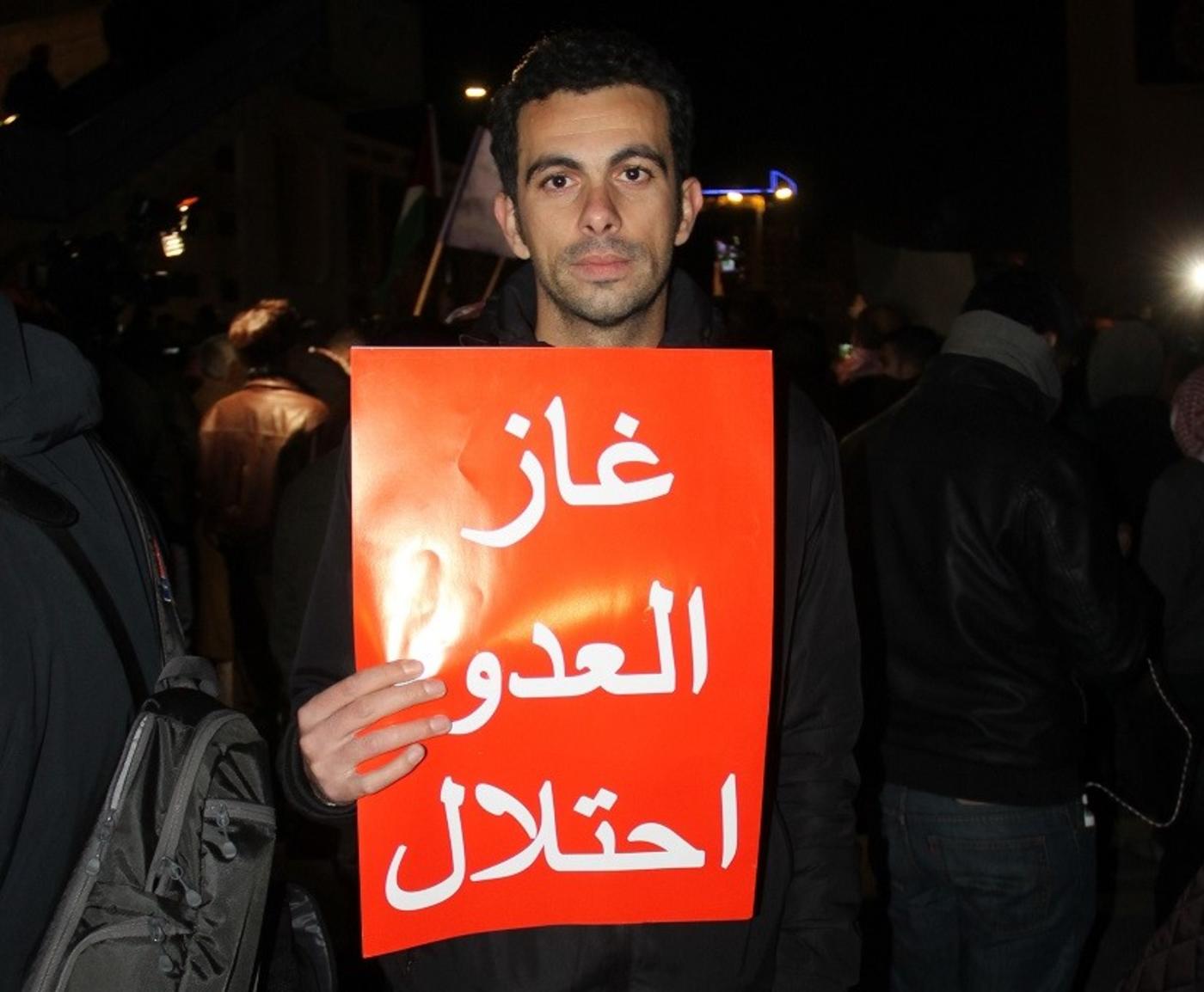 AMMAN - When ex-Jordanian minister of education, Omar al-Razzaz, came to power as prime minister in June, a youth called Qutaiba asked him on Twitter if there was any hope that Jordan would become a better country, or if he should think of emigration.

“Stop thinking of migration, Qutaiba, but be enterprising,” Razzaz answered.

The tweet went viral, as Jordanians were hoping that the demonstrations that toppled Hani al-Mulki’s government and brought Razzaz to office would give youth there a better future.

But for Ayman Hassouneh, 34, who left for Canada along with his wife Farah less than two months ago, migration is what Jordanians should be considering.

Ayman says that he left because he does not see how the impact of the economy or social policies on young people can improve in the near future - and that says that he agreed with Farah before they got married that they would not to have any children so long as they lived in Jordan.

“You cannot have a child in a place like this," Ayman from Ottawa, "no healthy social atmosphere, no proper public schools or hospitals. You need to pay a lot for good private services."

They are not the only ones to have left - according to a Gallup report, nearly 20 percent of Jordan’s “highly educated population” wants to permanently live abroad.

Jordan is in the midst of economic difficulties and unrest following the end of a Gulf-backed aid package worth $3.6bn in 2017; and Amman’s acceptance of an IMF austerity package in return for $723m in financial aid.

According to a Gallup report, nearly 20 percent of Jordan’s “highly educated population” wants to permanently leave and live abroad.

Thousands took to the streets across Jordan last May, protesting against the IMF-backed austerity measures including a draft law to raise taxes, an end to bread subsidies and a rise in fuel prices.

The demonstrations were supported by several professional associations: local media highlighted their peaceful nature and the civilised way in which protesters and security forces treated each other.

'You cannot have a child in a place like this; no healthy social atmosphere, no proper public schools or hospitals'

The timing of the demonstrations helped their success. Held during the holy month of Ramadan, many protestors spent the night-time hours between their iftar (sunset) and sohour (dawn) meals on the streets, closing off main roads.

Less than a week after the widespread demonstrations erupted, Mulki resigned. Omar al-Razzaz, a former World Bank economist, was asked by King Abdullah to form a new government.

Razzaz was popular among Jordanians due to his efforts to reform the rigid and out-of-date school curriculum while he was the minister of education under Mulki.

But initial enthusiasm among young people faded fast after he implemented the very same law which drove his predecessor from office. Razzaz’ government was also criticised after flash floods killed 21 people, mainly children, earlier in October near the Dead Sea.

The Thursday of the people

Calls to renew the demonstrations were launched in November on a Facebook page that is run by a movement known as Al-Ahrar (The Free), with the goal of changing government policies, rather than simply changing the prime minister.

Despite the founders of the movement being unknown, thousands responded to the calls and started to gather in front of the cabinet office in Amman every Thursday, in what is now known as Khamees al-Sha’ab ("The Thursday of the people").

Despite the harsh winter weather, dozens still protest every week, calling for political reforms. Unlike the first protests, the fresh demonstrations are neither big nor attracting any attention from official local media. One of the gatherings was dispersed by violence and tear gas.

Haleema Derbashi, 33, a teacher, says she still comes to the weekly demonstrations because she, along with young people in Jordan, wants to speak her mind in a civilised way. They all hope for a better future.

“I’m here to oppose raising the prices of main goods, the income tax law, the new cybercrime law, and all the problematic issues we suffer from on a daily basis," she says while standing with her friends, who usually join her at the protests. "This country needs us to stand together to make it better."

The problems she refers to include unemployment in Jordan that has risen to 18.6 percent in 2018. Among people aged 20-24, it stands at 37.7 percent - in a country where 70 percent of the population is under 30.

The protests are the first involving Jordanian youth since the 2011 protests which, in contrast, were mainly motivated by demonstrations in neighbouring countries.

After Mulki’s resignation, young people began to test their power to make real changes on the ground. More critical voices appeared on social media, questioning the work of the government and asking lawmakers for real change. #Cancel_fuel_price_rise is one of the main demands of people on social media.

Switch off electricity for 5 minutes at 8PM

Another popular demand is to cancel the Israeli-Jordanian gas deal that was signed in 2014.

Mohammad Absi, 33, is a member of the national campaign against the deal, which has proved to be highly controversial.

He said that he still goes to the weekly demonstrations, as he believes that youth can use these protests to speak about all of their demands, including the political ones.

Translation: If Egypt provides Jordan with half of the gas it needs, why import Israeli gas?

“We are here to stand against corruption, call for equal opportunities, and to fight against importing Israeli gas to Jordan,” Absi said in front of the PM’s office.

Another controversial move by the previous government was a cybercrime bill aiming to “regulate social media” and fight “hate speech” on the internet. Razzaz’s government is still considering the bill that was introduced by Mulki.

Opinion on the bill is divided. Some people think it will help regulate content on social media and bring to justice and fining people accused of cyberbullying. Others think the law aims to put more restrictions on freedom of speech. A campaign to #Withdraw_cybercrime_law has been launched on social media.

We are here to stand against corruption, call for equal opportunities, and to fight against importing Israeli gas to Jordan

The government has made attempts to increase transparency to counter accusations of corruption and incompetence. In October, directly after the Dead Sea floods, a website called Haggak Te’raf ("It’s your right to know") was launched to respond to rumours on social media.

Waleed Hallaj, 28, works in the renewable energy sector, which was recently introduced to the Jordanian market. Hallaj says that he has always wanted to work for the good of the country, but sometimes he feels like the situation is almost hopeless.

“I believe that Jordanians have enough awareness to make change; governments from now on know that nothing they do will go unnoticed,” Hallaj explains.

However, Hallaj believes that it is up to the youth to make changes in their lives, which for him means leaving the country eventually because he has to look for better opportunities for his future.

Mohammad Tayseer, 30, who owns an art gallery in downtown Amman, says that he has never wanted to be a part of the protests because he thinks he and other young people are the main vehicles for change, not politicians.

“I don’t believe that it’s the government's job to grant people a better life, it’s our job to enhance our skills and improve the country by our work,” Tayseer said while working on a new collection of paintings in his gallery.

Tayseer believes young people should stay and make a success of their lives in Jordan. “I might leave the country sometime in the future, but I will always come back here. I love this place, and I’m sure I’ll succeed here.”

'What’s the meaning of changing governments when they all have the same policies?'

Economic growth in 2019 is expected to pick up to 2.5 percent compared to 2.2 percent in 2018, according to analysts. The reopening of the border crossing with Syria in October after its three-year closure due to the war has already boosted trade between the neighbouring countries.

However, other economic news has been more worrying. One example is Mudieb Haddad & Sons, a Jordanian company that used to work as an agent for Colgate-Palmolive International. It announced in January that it was closing its factories in Jordan and laying off all of its 120 employees.

The company said in a press release that it had to close the factory due to high taxes and manufacturing costs. The statement was widely shared on social media by young people, who regarded the news as a cause of disappointment and despair.

Hassouneh, who left Jordan and now works as a business developer in Canada, says that no matter how the demonstrations manage to change the government, it still is not what he is looking for. “What’s the meaning of changing governments when they all have the same policies?” Hassouneh asks.

Even though he and his wife had good jobs and decent incomes in Jordan, they say they left to have better opportunities and a higher standard of living in Canada.

“I advise every young person in Jordan not to believe any of the politicians’ promises. Go and look for better chances and a future: just leave.” 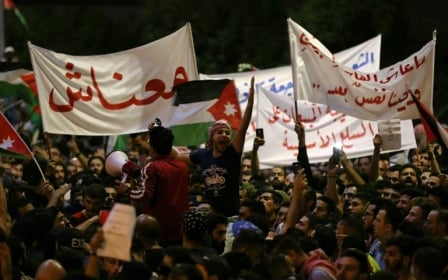