Despite attempts to silence him, Roger Waters has not curbed his outspoken views in support of Palestinian rights 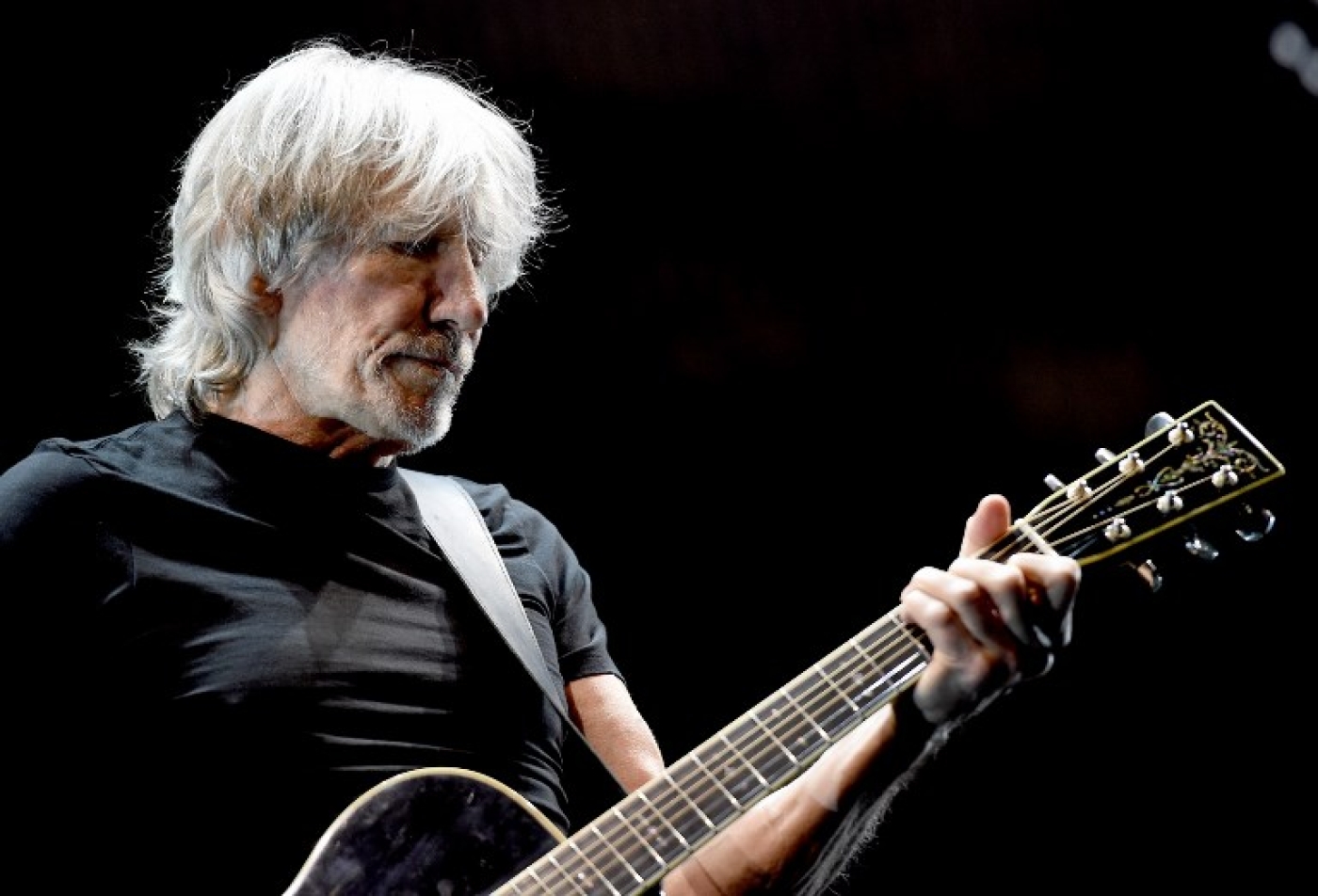 Musician Roger Waters performs during his Us + Them Tour at Staples Center on 20 June 2017 in Los Angeles, California (AFP)
By
Hadani Ditmars

VANCOUVER, Canada - During his marathon North American tour Us + Them, Roger Waters has been dogged by protests and a film was made about him accusing him of anti-Semitism.

But the 74-year-old Pink Floyd co-founder has not curbed his outspoken views. Instead, he has been speaking about his support for Palestinian rights and refugees to audiences in Canada and the US.

Live from his concert at Vancouver’s Rogers Arena last weekend, Waters highlighted the plight of Palestinians by projecting images of the Separation Wall during the Pink Floyd song Us and Them, as well as that of Syrian refugees, the subject of his song The Last Refugee, from his latest album Is This the World You Really Want?

It’s called ethnic cleansing. That’s what is happening [in the Occupied Territories] and the regime there is called apartheid

Shortly before launching into his hit song Mother, he paused for effect before telling the thousands of fans waiting on his every word: “What else do I like about Canada? You don’t have a f*****g bomb! How cool is that?” he said.

The musical legend managed to pack in 64 tour dates from Kansas City to Vancouver during the North American leg of his world-wide Us + Them tour, despite being targeted by activists against the Boycott, Divestment and Sanctions movement (BDS) and politicians who tried to shut down some of his performances.

Despite the many attempts to silence Waters, he continued to voice his support for Palestinian rights at a talk organised by activists at the St Andrew’s-Wesley United Church in Vancouver last week.

He added that he continued to advocate for BDS because “it’s the only thing that I’ve seen that’s had any effect at all.”

Wearing a black t-shirt and jeans, and raising his fist in a “black power” salute, Waters stood on a raised platform near the altar of the 84-year-old church in Vancouver, as he spoke to a crowd of around 1,000 people about his music and political convictions.

Waters said that his own “difficulties” – which include being smeared as an anti-Semite, due to his outspoken support of BDS - pale in comparison with the trials of living under occupation.

“I know the depths to which my opponents will sink to blacken my name.”

But these attempts, he said, “are really just one more way of obscuring the truth: to stop public discourse, to stop people from talking about what happened in 1947 and '48, in '67 and '73, and what is happening now. They don’t want anyone to know about that. And by and large they’ve succeeded in that south of the border in the US," he said, referring to anti-BDS laws that have passed in some states in the US.

A handful of local Palestinians attended the talk. One who wished to remain anonymous expressed dismay at the lack of Palestinian involvement in the event, saying she had “mixed feelings” about it “but it always feels good to see our cause being spoken of".

A small group bearing Israeli flags and signs that said “Israeli Lives Matter” and “Boycotts Don’t Scare Us,” protested outside the church prior to the talk, following a mail out by the Centre for Israel and Jewish Affairs against “the rock musician obsessed with boycotting Israelis,” stating that "Waters promotes vile discrimination against millions of people simply because of their citizenship."

While Waters did not directly address charges of anti-Semitism or the documentary Wish You Weren't Here, he had free reign to speak his mind on a wide range of political issues to a rapt audience.

When asked about Canadian Prime Minister Justin Trudeau’s opposition to BDS, Waters did not mince his words.

“They (Canadians) should say to Trudeau: wake up, what you’re saying is nonsense. The fact is that most of your constituents would like to support BDS and most Canadians think that Canada should place sanctions on Israel in order to get it to abide by international law and basic human rights that have existed since the Hague conventions; never mind the Geneva conventions.”

A recent poll suggests that Waters is correct. In a survey co-sponsored by Canada for Justice and Peace in the Middle East (CJPME) and Independent Jewish Voices Canada (IJVC) between 25 January and 2 February 2017, it found that most Canadians were receptive to sanctions and boycott as “reasonable measures to defend Palestinian rights”. The survey spanned a random sample of 1,000 Canadian adults aged 18 and over.

When asked by his interviewers to respond to some fans’ suggestions that art and politics should be separate, he dismissed it as imbecilic.

"That’s just dumb. It’s just another method of the lobby trying to persuade people that it’s an aberration – it’s not. Should Picasso not have painted Guernica?”

At a Vancouver screening on the weekend, Halperin accused Waters of “spewing complete nonsense about Israel and the Jewish people".

B’nai Brith Canada CEO, Michael Mostyn, spoke of his organisation “fighting for the Jewish community aggressively and using the laws that are in place in this country to identify the most perverse hate mongers that are out there,” while attending the screening of Wish You Weren't Here.

Waters recounted his journey as a BDS activist, which started 11 years ago when he was booked to play a gig in Tel Aviv.

“I started getting emails from Palestinians suggesting that might be a bad idea because of the new BDS movement,” he explained. “And they prevailed upon me to cancel the gig. Almost immediately I was put in touch with Omar Barghouti [co-founder of the BDS movement] who has become a good friend of mine.”

In the end, Waters moved the show to Neve Shalom, a village in between Tel Aviv and Jerusalem, called the "Oasis of Peace” in English. Palestinians from the occupied West Bank, he recounted, could not attend - something that slowly dawned on him - due to restrictions on their freedom of movement.

“It all went well,” related Waters, of the 60,000 strong Israeli crowd, “until I said ‘you are the generation of young Israelis who must make peace with your neighbours and put an end to all this fighting and carnage – and figure out how to live together.’ You could have heard a pin drop. They went from wild applause to ‘what the f***’s he talking about?”

The next year Waters toured the West Bank with the United Nations Relief and Works Agency (UNWRA), observing settlements and “learning about the system of military occupation”.

I said ‘you are the generation of young Israelis who must make peace with your neighbours and put an end to all this fighting and carnage...' You could have heard a pin drop

“As we passed checkpoint after checkpoint, we were treated with brutal disdain by the soldiers, and I remember thinking if it’s like this for me as a visiting foreigner, what must it be like for the people living under this occupation?" he told the Vancouver crowd.

A protestor was peacefully ejected from the venue after he unleashed a banner stating "Boycotts Don’t Scare Us," but Waters finished with a rhetorical flourish.

As the crowd gave him a standing ovation, he said that most human conflicts were between those who love other people and “those who love stuff”.

“These conflicts are not about religion, not about borders. They are about who has and who doesn’t. Don’t let anybody tell you different." 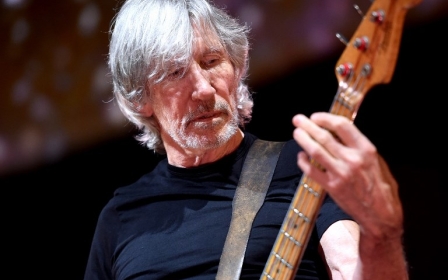 Politics
The denied: The artistic collective barred by Israel