Sabra and Shatila: We will never forget

33 years since the brutal massacre, MEE explore the work being undertaken by the camp’s children and youth centre 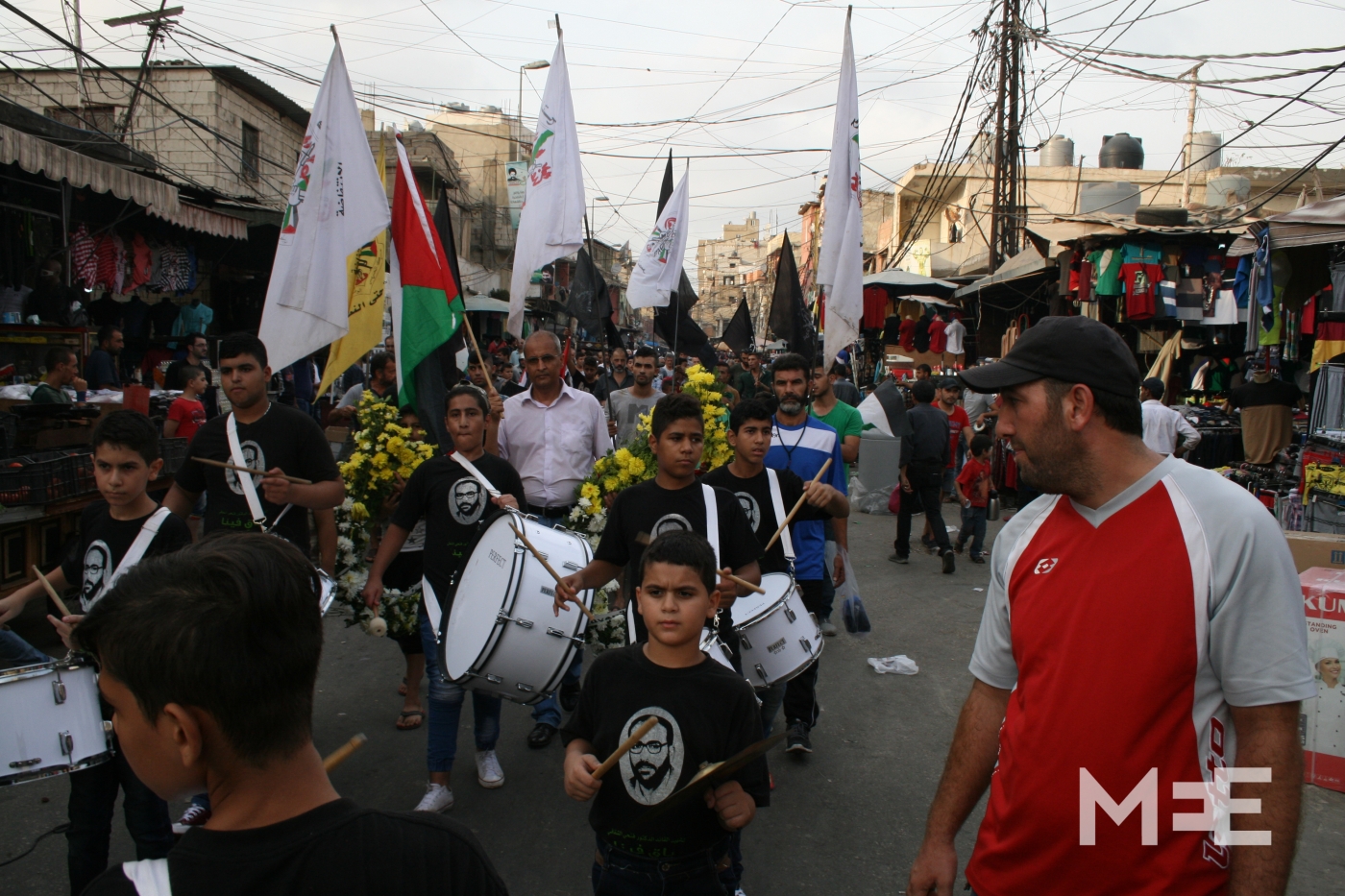 I was still in the UK when I received an email that both honoured and chilled me. Invited to take part in the annual commemoration for the “Martyrs of the Sabra and Shatila Massacre”, I was to join community leaders, families and activists in marking the 33rd anniversary of one of the most violent chapters in the region’s history.

Four days and 4,000 miles later, I was on the site of a mass grave in South Beirut’s Shatila refugee camp. Standing next to me, elderly Palestinian women clutched photographs of their loved ones - lost during an atrocity that no one has ever been sentenced for.

The sense of permanence and historical injustice on entering Palestinian refugee camps, whether in the West Bank, Jordan or Lebanon, never fails to overwhelm and Shatila is no exception. Established in 1949 to accommodate 3,000 of the refugees forced to flee villages in northern Palestine, the camp’s damp and dark alleys scream of political amnesia.

Recently, the population of the one square kilometre camp is said to have swollen to over 20,000. The rabbit warren of cinder block structures is now home to a hotchpotch of cultures including Kurds, Iraqis, Egyptians, Sri Lankans and Syrians.

We will never forget

On 16 September, 1982, Lebanese Christian militia entered Sabra and Shatila seeking revenge for the death of Christian Maronite President, Bachir Gemayel. Under the command of Ariel Sharon, the Israeli army turned a blind eye as the Phalangists systematically butchered thousands of elderly, women and children. Hundreds were hauled away in trucks and never seen again.

To mark 33 years since the slaughter, Shatila’s Children and Youth Centre (CYC) hosted an exhibition displaying photographs of the mutilated corpses of the murdered civilians. The camp’s only open space teemed with tiny Palestinian and Syrian children who climbed fences and kicked footballs in the baking heat.

Founder of CYC and Palestinian refugee, Abu Moujahed, said the memorial was one of a number of demonstrations in Shatila during the last week or so. People had also taken to the streets to protest against Israeli violence at Al Aqsa, and the world’s refugee crisis.

Abu Moujahed, aged 67, was just a month old when his parents were forced to flee Palestine in 1948, seeking refuge in a southern Lebanese village. He described a time when people went back and forth between the two countries to collect items from the villages they were expelled from.

In 1997, with a group of friends, Abu Moujahed created Shatila’s CYC, which was to become a lifeline for the disadvantaged. For 19 years the centre has tirelessly provided psychosocial and educational support to thousands of children using workshops, the arts, culture and sport. Crucial themes such as human rights, drugs, integration and non-violence are tackled and the centre also co-ordinates and provides humanitarian assistance to refugee families.

It’s rare to find Palestinians who have lived in Shatila since it was established as people often move from camp to camp, according to Abu Moujahed. Asked if the UNRWA figures claiming that 9,000 Palestinian refugees are registered in the camp are likely to be accurate, he laughed.

“It’s absolutely impossible to say how many are in any camps. For example I have lived here since 1962 and I’m not registered,” he replied.

I didn’t believe them at first

The organiser of the memorial activities, Abu Moujahed spared a few minutes to talk about the haunting events that took place 33 years ago.

“People had begun to rebuild their homes, Palestinians had only just started to breathe again,” he remembered.

Claiming the Palestinians were left without protection after forces withdrew, he continued: “On the 14th September 1982, the Israelis entered Beirut and on the 15th people started saying there was a massacre. I didn’t believe them at first. I thought they were lying because usually you hear fighting. A woman was crying, hitting herself in the face and screaming, ‘There’s a massacre, there’s a massacre’"

He said the exact figures of those killed are unknown. “Some estimates say between 1,500 and 2,000 from Shatila, but that doesn’t include those killed outside the area. For example, some were killed in the Gaza hospital, some at the Kuwait embassy and the Cite Sportif.”

Chillingly, he added. “Some imagine that those who were kidnapped are still alive and are going to come back one day.”

Describing the criminals behind the three days of rape, fighting and brutal executions, he was frank. “This country always belongs to people outside who think the outside loves them. Before and during the civil war, some Lebanese considered themselves Western and not Arab. They sought support from Israel against Lebanese nationalists and Palestinians and wanted revenge after the president was assassinated. Maybe Israel encouraged them.”

He taught me about the Nakba

As we marched with the eerie accompaniment of deafening drum beats past walls adorned with faded tributes to young martyrs, I met 22 year-old Rayan Beshawi.

A regular attendee at the yearly commemoration, Rayan is the daughter of a Palestinian father and Lebanese mother. After being forced to leave Jaffa, her grandfather initially sought sanctuary in Shatila.

Narrowly avoiding injury as noisy mopeds weaved around us, Rayan asked if I had ever been to Jaffa. Awkwardly, I admitted I had and she got that wistful look some Palestinian refugees get when they realise your global postcode has entitled you to visit the homeland they can only dream of.

After being a member of CYC since the age of 12, recently graduated Rayan is now the centre’s full-time auditor. She described how she became involved.

“I met Abu Moujahed and liked it there, then me and my brothers started going on Fridays.” She added. “We did songs, games, dancing and I started getting involved in workshops. After that, my mum started working there as a teacher.”

She described CYC as an integral part of her life and explained how crucial the work is in the lives of young people in the camps.

"Guns, drugs, drink are all OK here and you don’t have anyone to tell you they’re not. When you come here, they teach you about this,” she said and added that over 60 children a day attend classes for learner support.

“A child sees the whole world through what happens at the centre,” she said.

Rayan’s university was made up of 99 percent Lebanese Druze and despite attending for four years, no one knew that she was Palestinian. She told me why.

“Once, I was on my break and some people were speaking about war. I heard them say that all the bad things that happen in Lebanon are because of Palestinians.”

She said CYC had connected her with her Palestinian identity. “I didn’t know the difference between a Lebanese and a Palestinian at school. All I knew was there is a country called Palestine,” she giggled.

She added. ”I only know what I know today because of Abu Moujahed.”

This battle is not ours alone

After the memorial march had wound its way through the chaotic alleys, past the martyrs cemetery and culminated with emotive speeches by community leaders, I grabbed a final word with Abu Moujahed. I asked what internationals can do to support Palestinian refugees.

He shook his head and grinned. “I mean, after 67 years, what can you ask people to do? We want people to support Palestinians to get back to their homes. We want them to boycott Israel, just like what happened with apartheid in South Africa.”

Claiming that nobody will leave in peace unless there is a right to return for Palestinians, he added that while the issue remains unresolved, terrorism will increase. He said the West supported weak regimes and dictatorships in the Middle East, saying he wants the international community to do more to support peace and not just steal oil and minerals.

When asked if the regional turmoil is a distraction from the ongoing plight of millions of Palestinians who are still waiting for a political solution, he was adamant this is not the case.

“No, we have more supporters than ever before. BDS is increasing, you would not have seen this 20 years ago. The British are the biggest criminals with the most responsibility and now they are one of the biggest supporters of BDS.” He said.

“We are not in a hurry and have to have patience,” he smiled. “It’s been 67 years - my age! This battle is not ours alone - it belongs to everybody.”