Syria's murdered White Helmets: 'We have lost the best men in town'

MEE speaks to the friends and family of the seven White Helmets killed on Saturday morning, whose murders remain unexplained 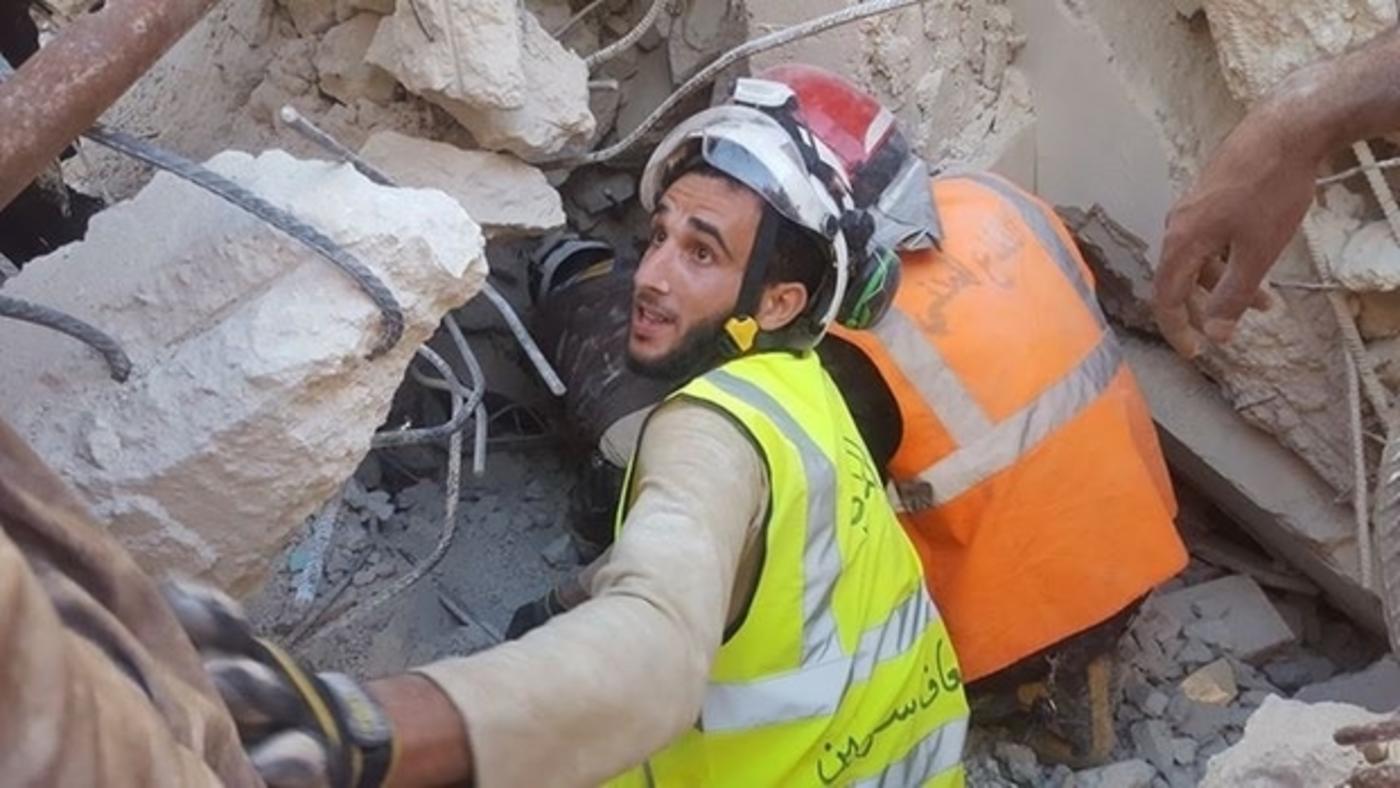 Mohammed al-Hir from the White Helmets during a rescue operation. He was shot dead on 12 August (Photo courtesy of Matiah Jalal)
By
Lizzie Porter
, Hussein Akoush

Omar al-Hir was planning to take bread to his brother Mohammed and his colleagues at their base in a northwestern town. The civil defence team had run out, and would need more supplies before the next shift.

But before Omar could get to the White Helmets’ centre, he received a message.

'I can’t believe that he is dead'

His brother Mohammed, 25 - known among friends as Abu Kifah - had been killed. Unknown gunmen had entered the team’s office and shot him dead, along with six colleagues who had been on the night shift on 12 August.

“I ran to the centre to find them all lying on the ground,” Omar told MEE via WhatsApp from his hometown of Sarmin, where the murders occurred. “He was the closest brother to me among siblings, and he liked to give his best to people.”

He finds it difficult to continue speaking and breaks into tears.

“With the will of God, they are martyrs," he said.

Among those killed, Mohammed had been particularly famous. His face appeared in international media last October when he was brought to tears during the rescue of baby Wahida Ma'artouk in Idlib.

Earlier this year, Mohammed sent a voice message to a colleague, heard by MEE, in which he talked about his will to keep working. It came despite the dangers: estimates from the group suggest more than 140 volunteers have been killed on duty.

'I love my work; it has become a part of me'

Mohammed said that despite his fame after rescuing baby Wahida, he would never leave his work or his home.

“I can't travel out of Syria, because it's for us, it's for all. God willing, we will rebuild Syria in the future," he said.

'They are used to death'

The 3,200 volunteers in the White Helmets are used to death. They spend their days running to the sites of Syrian government or Russian air strikes, pulling people from the rubble of destroyed buildings.

They risk missiles dropped in so-called “double-tap” strikes, in which planes would return to hit the same place twice, after rescuers rush to help the injured.

Despite Idlib supposedly forming one of Syria’s “de-escalation zones,” 47 people were killed in the province in July alone, by Bashar al-Assad's forces, "extremists," and other parties, according to the Syrian Network for Human Rights monitoring group.

But these deaths were different. The men - Mohammed al-Hir, Ziad Hussein Qadahoun, Bassel Mousafa Qasaas, Muhammed Shbeeb, Abdul Razzaq Hussein Haj Khalil, Mohammed Karouma, and Abeeda al-Radwan - were killed in their own office by unknown gunmen. The attackers stole two vans and other equipment, including the men’s renowned white helmets, by which the search and rescue team had come to be known.

'I can't travel out of Syria, because it's for us, it's for all. God willing, we will rebuild Syria in the future'

The culprits - suspected to be bandits or Islamic State group cells - have yet to be found.

The attack received worldwide attention: the US State Department said that it was “saddened and horrified” by the “brutal murders,” while British Foreign Secretary Boris Johnson described the volunteers’ deaths as “a huge loss for their families, Syria and the world”. According to a spokesperson for the Foreign and Commonwealth Office (FCO), the UK has provided the White Helmets with £35 million (over $45 million) in support since 2013.

The White Helmets have faced criticism from activists on social media, mainly for receiving millions of dollars in aid from western governments, including USAID, the UK foreign office and Germany. President Bashar al-Assad's government and his ally Russia also accuse them of being tools in the hands of their international donors.

The group was nominated for the 2016 Nobel Peace Prize and a Netflix-produced documentary about them won an Oscar this year.

'A pool of blood'

Matiah Jalal, a close friend of the victims, had not been able to sleep the night before the attack. At the time, he did not know why. All was normal: he and three of the men, who would meet their deaths hours later, were planning to meet a friend crossing into Syria from Turkey the next day.

“I went home and I tried to sleep. My home is near the civil defence centre. I did not sleep until dawn,” Jalal told MEE.

A neighbour woke Jalal at 7am with the terrible news, and he was among the first people to arrive at the scene.

“I saw them lying on the ground, covered with blood. The room was a pool of blood: it was everywhere, on the walls, on the ground," he said. "They were killed by a bullet to the head. My nerves broke down.”

For now, friends and family of the seven men murdered on Saturday morning are simply grieving. The oldest of the victims, Ziad Qadahoun, was 40 years old and left behind four children and a wife. The youngest, Abeeda al-Radwan, is just 20 years old and single, the only brother among six sisters.

'He was a funny person, he was brave, and everybody liked him'

Wrapped in blue blankets, the men’s bodies were taken to the local mosque for funeral prayers later on Saturday. Muslims are usually buried within 24 hours of dying: the men were laid to rest in narrow graves in the ochre ground.

“He was a funny person, he was brave, and everybody liked him,” Jalal told MEE, describing Mohammed al-Hir, alongside whom he had been injured in an air strike in 2015. “He was industrious, that’s why he gained people’s respect.”

Abdulrahman Kassas lost his brother Basil Kassas, 31, in the murders. His brother, one of five siblings and a former head of the White Helmets centre in Sarmin - a town of around 25,000 people - leaves behind two children under the age of five.

“The evening before the incident, we had an evening gathering, us and his friends,” Abdulrahman told MEE. “We enjoyed it a lot: I haven’t laughed like that for five years due to the war. I told my friends that I hoped we wouldn’t face something bad after enjoying ourselves like that.”

He now lives only 800 metres away from the cemetery containing his brother’s grave.

“We lost the best men in the city. I have been to the cemetery with my mother to visit his grave every day. I can’t believe that he is dead.”

The men’s murders show how there are multiple threats in Idlib. The area is controlled by Hayat Tahrir al-Sham (HTS), a group of militants linked to a former al-Qaeda affiliate. The group issued a statement expressing its sorrow for the death of the White Helmets and commending their work that has helped "everyone".

"This crime comes as part of a series of actions that aim to [bring down] the revolution, including the cadres, the elite and the civilian and military institutions," HTS said in the statement.

Although HTS appears not to have been involved in Saturday’s attack, it has taken part in power struggles with other rebels in the region.

Then there are the government air strikes, which have continued despite the so-called “de-escalation zone” covering Idlib.

Despite the multiple risks in Idlib, Syrians are being moved to the province from other areas of the country in relocation deals with the Assad government, and even from Lebanon.

Earlier this month, thousands of refugees from Syria were brought back to Idlib from Arsal on the Lebanese side of the mountainous region dividing the two countries in a deal brokered by Hezbollah.

“People are being sent to Idlib from Lebanon and the rest of Syria but they don’t have anywhere to go from there,” said Mahmoud Bitar, a Syrian human rights defender who knew the seven men before their deaths. “The Turkish border is shut and there is hatred towards the Syrians from the border guards."

Sarmin’s local council has instigated extra security since the attack, with checkpoints at the town entrance in force after dark. Residents are still fearful, but photos shared on social media showed members of the civil defence force across Idlib standing in solidarity with the Sarmin victims, vowing to continue their work.

'We will keep going on saving lives'

“We will keep going on saving lives,” said Omar, also a White Helmet volunteer, who inspired Mohammed to join the group in 2015.

While his body lies in its ochre grave in Sarmin, Mohammed’s words echo that spirit.

“I will keep going on this path until the last moment in my life,” he said in the voice message, in his low tone. “I told you: this work has become part of me. I can't leave it, ever ever." 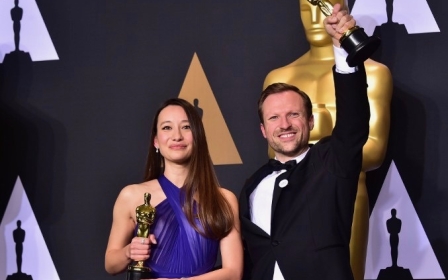 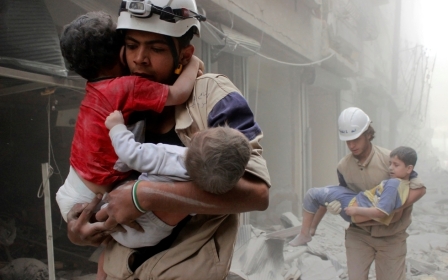