Once used as a mark to differentiate Christians, tattoos are being reclaimed as a display of faith for those on pilgrimage to the Holy Land 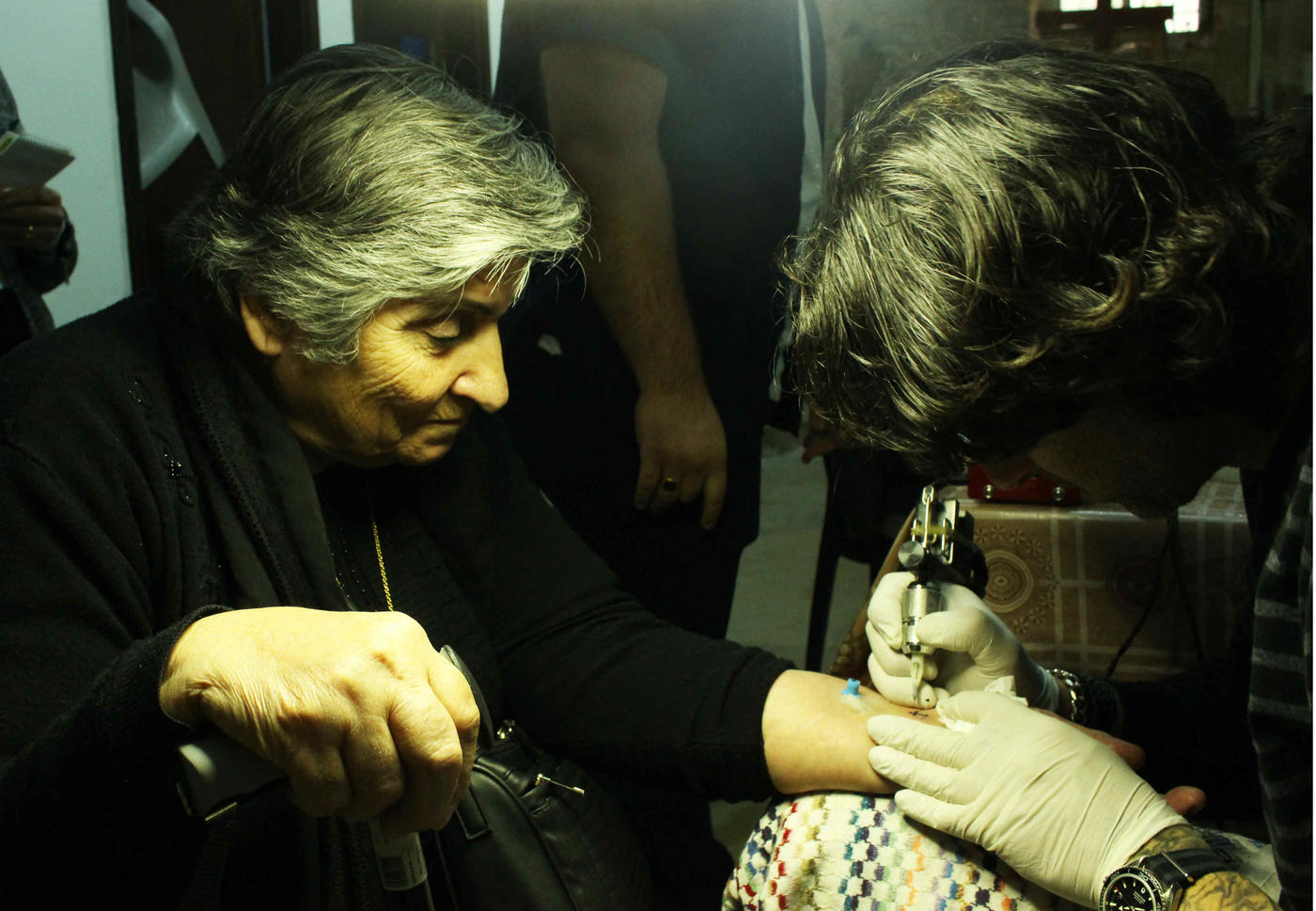 OCCUPIED EAST JERUSALEM – At least 30 British-Iraqi Christians crowd the basement of the St Mark’s Monastery of the Syriac Orthodox Church in the Old City of Jerusalem, waiting in a long line to receive a mark of certification for their pilgrimage to the Holy Land: a tattoo of the cross.

Men and women, young and old, wince in pain as the buzzing tattoo gun traces their skin, leaving behind black crosses on their wrists or arms.

“The tattoo means everything to me,” 45-year-old Zahar Mafouth, an Iraqi-British Catholic, tells Middle East Eye in the dark halls of the monastery. “It reminds me every day to be a good person.”

Following the Muslim conquest in the region around 640AD, Christians were tattooed by the state with a cross on their inner right wrist

Zahar is among scores of Christian pilgrims who flock to occupied Palestine and Israel from all over the world to participate in pilgrimages to the Holy Land. Near the end of their trip, many receive tattoos commemorating their experiences before they return to their countries.

The practice has been sustained in the region since medieval times when primarily European Christians would mark their bodies with tattoos as a souvenir of their journey to the Holy Land and a physical testament to their faith.

This specific group arrived in Jerusalem to be inked by a Palestinian artist who has become somewhat of a local celebrity: Wassim Razzouk.

Zahar’s mother Faiza, 71, is bandaged by Wassim’s wife on the other side of the basement, where disinfectant is sprayed on her fresh cross tattoo and rubbed into her reddened skin. She has been on a religious pilgrimage in the area six times, represented by the dates of each trip tattooed one after the other below the cross inked on her wrist.

Wassim is part of a 700-year-old family tattooing tradition, passed down from his father’s side, developed in Coptic Egypt and brought to historic Palestine some 450 years ago. His precision, artistry, and his family’s impressive history in the region have attracted scores of international pilgrims, tourists and locals to participate in a centuries-old Palestinian Christian practice.

He runs a modest tattoo shop in the Christian quarter of the Old City. However, during Easter and Christmas, Wassim receives too many clients to accommodate them there, forcing him to swiftly transform the spacious halls of local monasteries into makeshift tattoo studios.

From persecution to mark of pride

Wassim’s ancestors developed the tattooing practice with the Coptic Orthodox church in Egypt. Following the Muslim conquest in the region around 640AD, Christians were tattooed by the state with a cross on their inner right wrist so that authorities could more easily identify their religious proclivities and collect taxes levied on Christian communities.

According to Wassim, during periods of persecution, this same cross had to be shown by Christians in order to enter the church for safety precautions, as churches began to offer the tattoos as a service to the local community. The practice became deeply rooted in Coptic Christian traditions.

But even during Roman empire times, Christians were tattooed by the state as a form of punishment. "From the first to fourth century, Christians faced sporadic arrests and persecution; when they were arrested, they were often tattooed and sent to work in the gold, silver, and lead mines," writes Margo Demello, author of Inked - Tattoos and Body Art Around the World.

Tattooing among Christians also became central to identifying themselves with the suffering of Jesus Christ. A cross tattoo would symbolise Christ's crucifixion at times when Christians faced persecution.

When Wassim’s ancestors migrated to historic Palestine centuries ago, there was already a longstanding tradition of tattooing Christian pilgrims in the Holy Land. While offering tattoos to the small population of Coptic Christians in Jerusalem at the time, the Razzouk family quickly became ingrained in the pilgrimage tattoo practice, Wassim tells MEE from the Razzouk Tattoo Studio in the Old City.

The studio is decorated with framed black and white photographs and historical relics of their tattooing practice, passed down from generations.

Yacoub, Wassim’s grandfather, worked as a carpenter in historic Palestine, while doing tattooing on the side. Most tattoo artists had other jobs to sustain themselves, as local tattooing was typically done at cheap prices and pilgrimage tattooing was only seasonal, Wassim says.

British and Australian soldiers stationed in British Mandate Palestine from 1920 until 1948 became Yacoub’s main clientele. The business accumulated from soldiers eager to receive tattoos allowed Yacoub to expand his practice from a makeshift studio in his home to an official tattoo shop in the Mamilla neighbourhood of West Jerusalem, Wassim explains.

However, just a few years after opening his first tattoo studio, Zionist militias invaded historic Palestine, and, alongside some 750,000 other Palestinians who were forced to flee their land in 1948 in what Palestinians refer to as the Nakba (the catastrophe), Yacoub had to abandon his shop and his home.

Tattooing across displacement and occupation

Yacoub hastily collected his tattoo equipment and fled with his family to Jordan as refugees for several months until the Arab-Israeli war ended, Wassim says today.

During his time in Jordan, Yacoub found himself tattooing an unlikely group of customers: Iraqi Christian soldiers who had migrated to the Levant to fight the Zionist takeover of historic Palestine.

Yacoub had hoped that when he one day returned to Palestine he would be able to return to his tattoo studio in West Jerusalem. However, like all Palestinians who fled in 1948, his property was consumed by the newly established Israeli state.

'Not only does Palestine exist, but we have had a vibrant culture here for many centuries'

Other Palestinian pilgrimage tattoo businesses shuttered during the 1948 war, and the subsequent Six-Day War in 1967 when the Israeli military occupied the West Bank, including East Jerusalem and the Gaza Strip, according to the family.

Upon their return to Palestine after the end of the Arab-Israeli war, the Razzouk family began offering tattoos from their home and became the last remaining Palestinian family in East Jerusalem providing such a tattoo service for pilgrims.

And in 2016, Wassim was able to open up an official tattoo studio in the Old City for the first time since his grandfather Yacoub was forced to flee his property in 1948. He designed the studio to resemble the original tattoo shop in West Jerusalem.

The budding popularity of the Razzouk family's tattoo studio has helped put their family's tattooing history on display in the region, while also acting as a challenge to right-wing Israeli narratives, Wassim says.

“When the extremist Israelis claim that Palestine never existed, I feel proud to have my family as a reference point to show people that not only does Palestine exist, but we have had a vibrant culture here for many centuries.”

Father Boulus, an energetic, charismatic local priest at St Mark’s Monastery, says that his tattoos - covering the entire length of his arms - are a reminder of his religious beliefs. He sends pilgrims visiting the monastery to get tattooed by Wassim, owing to the Razzouk family’s history in the area.

Boulus also designs tattoos of prayers written in Aramaic, which have become popular among local Palestinian Christians, he says.

Kareem Solomon, a 26-year-old Assyrian Christian who migrated to the UK from Iraq as a child, tells MEE that these tattoos are central to the identity of Christians, particularly those from the Middle East where the community is a minority.

With his wrist still throbbing after receiving a tattoo of the Jerusalem cross moments earlier, Solomon tells MEE that he was not planning on getting a tattoo during his trip, but decided to “put his experiences on display”.

Solomon explains that he works as a pharmacist in the UK where “most people are too scared to ask me if I am Christian or Muslim, so they just assume I am Muslim because I’m from Iraq, my skin colour is slightly darker and I have a beard”.

There’s nothing wrong with this assumption, Solomon says, but it makes our community “feel invisible”.

'The tattoo makes our identity public'

“I am Christian, and I want others to know that,” Solomon tells MEE. “This tattoo makes our identity public. You can shake my hand, and on my wrist you can easily see who I am.”

Solomon and the other pilgrims are well aware that their family members back in Iraq would face great difficulty obtaining a visa to travel to Christian holy places, as all borders in occupied Palestine are controlled by Israeli authorities. But even with a UK passport, Solomon did not pass Israeli security without issue, and was held for hours before he was allowed to enter the country.

“It’s our right to come to the Holy Land,” Solomon says. “It’s the centre for Jews, Muslims and Christians. It should be a country where anyone who wants to practise their religion can enter.”

“The way Israelis treat you, it just increases the tensions here. Because it makes you think Israelis are judging you solely on the way you look,” Solomon adds.

For Wassim, his tattooing practice has reaffirmed his pride in not only his Christian identity, but also in his Palestinian roots.

“Especially being from a minority [religious] community in Palestine, I feel honoured to be a custodian of a practice so deeply connected with our history in this region.”