Tunisian fishermen on the frontline of migrant tragedy 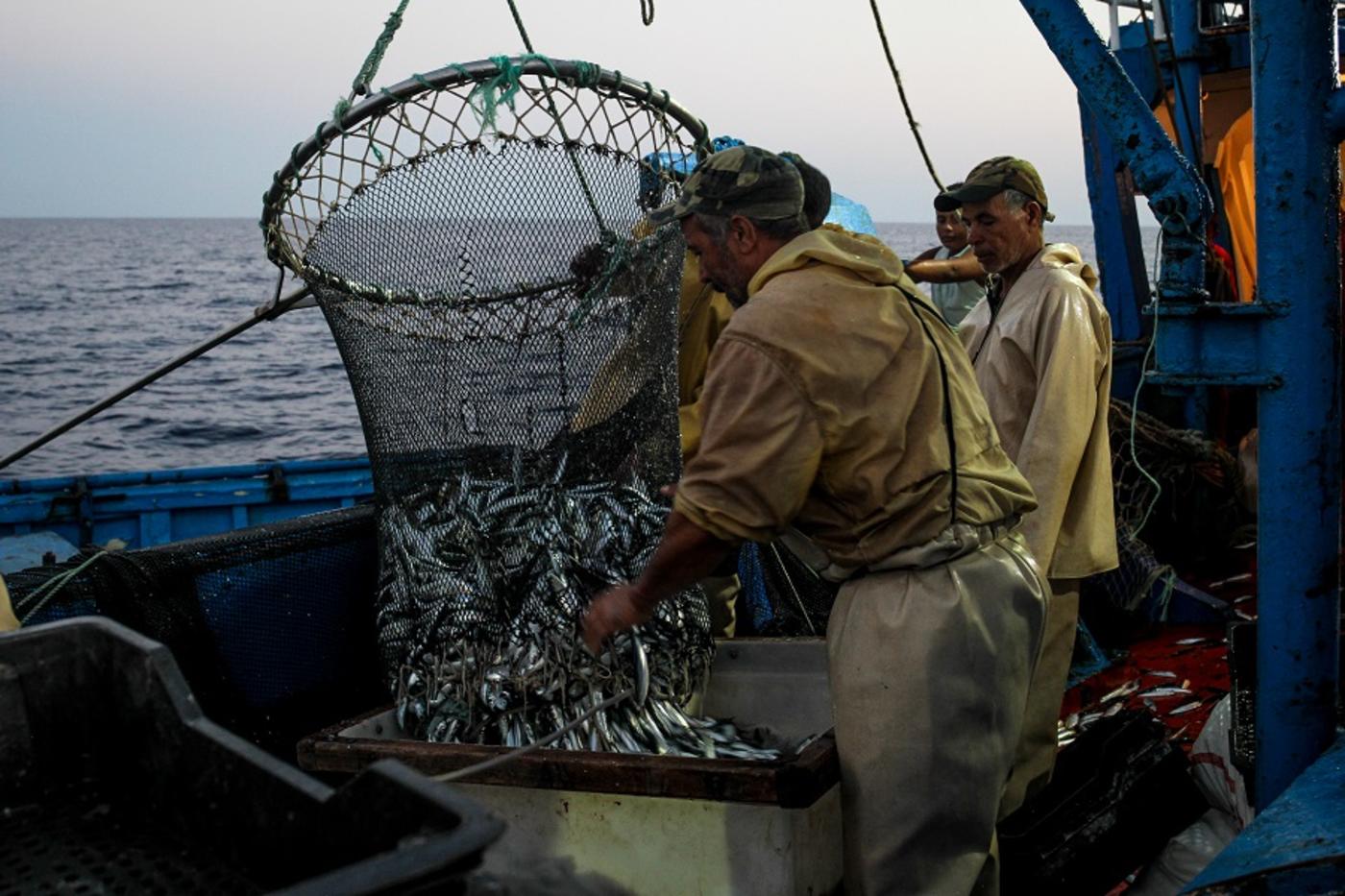 ZARZIS, Tunisia - "When we go out to sea, we are afraid to see the dead," says fisherman Tarek Ahmed, in the southern Tunisian coastal town of Zarzis, as he describes vivid memories of bodies that he has found face-down, floating in the cold waters of the Mediterranean.

We know that there is a corpse because of the smell

"We know that there is a corpse because of the smell," says fisherman Salah Mecherek, while inspecting the sea from his vessel under the glow of a yellow light beaming from lanterns used during a night fishing trip.

"It's indescribable and terrifying; you can smell it from far away offshore," Mecherek adds.

The rest of the crew members drop their gazes on to the water. All 15 of them have seen at least one corpse floating at sea.

Migrant shipwrecks have been the norm for more than 15 years, as legal migration to Europe became increasingly restrictive. The problem was exacerbated in Zarzis, which lies near the Libyan border, as the Arab revolutions kicked off. Since Libya's civil war, which has dominated the country since protests against Muammar Gaddafi broke out in February 2011, people have been fleeing for their lives in hope of safety, or a better life.

The country has also become a hub for human trafficking to Europe.

The fisherman of Zarzis have seen the human toll of this highly profitable human flow, whose victims wash up on Tunisia's shores.

"If we find them here, it is because they got lost. The traffickers tell them to head towards the stars, but then comes dawn," says Mecherek. "Sometimes we find them after a week at sea without water or food. It’s a tragedy."

Fishermen know what it means to be a "man at sea". When they are on board their vessels, they are vulnerable and at the mercy of nature. Solidarity is necessary for survival.

For Anis Souï, secretary of the Zarzis Fisherman's Association, it was one of the reasons why despite a degree in architecture at the university of Tunis, he returned to Zarzis and fishing.

"For several days you're in a tight environment with a few people who become like family. At sea you forget everything; it's completely different from the land," he explains.

The fishermen of the small town on the Mediterranean coast, especially those who fish for tuna on the high seas, are on the same transit route as the boats trying to reach the Sicilian island of Lampedusa from Libya. As a result they often encounter boats that are in distress and lost at sea.

"We have taken many risks in these years," says Chamseddine Bourassine, president of the Zarzis Fishermen's Association.

"Once, during a storm, I was involved in a rescue at sea and a man fell into the water," he says referring to an accident in 2015. "There was nothing I could do. We could not find him. I will never forget that day."

The aftermath of the 2011 Tunisian Revolution has also contributed to the influx of refugees. Taking advantage of the power vacuum, an exodus of Tunisian youth has sailed to Europe seeking an alternative life.

"There was no one patrolling the ports," says Souï. "After the umpteenth shipwreck, we tried to block the departures ourselves. We went to the port and we tried to convince the people not to leave or sell their boats to some smugglers," he says.

The harragas -  an Arabic word meaning path-burners - is a term used for North African migrants trying to reach Europe illegally. It refers to those who have burned their bridges. More than 600,000 harragas have reached Italy by sea from North Africa since 2014, while some 12,000 have died trying to make the crossing.

Rescue at sea was one of the reasons that led fishermen to establish an association.

"Before 2011, you could not even think of the idea of ​​an association. It was impossible under [former President Zine al-Abidine] Ben Ali," says Bourassine, referring to his crackdown on freedom of speech and freedom of association during his 23 years of autocratic rule.

"But when we opened the association, we started directly with rescue training and awareness sessions in schools," he says, pointing to the hundreds of photos adorning the association's walls. "We told the children about the corpses we find at sea and the risks of this kind of migration."

After the umpteenth shipwreck, we tried to block the departures ourselves

Later, in 2015, Doctors Without Borders (MSF), established a bureau in Zarzis. The organisation set up trainings “for dead body management and rescue at sea for the fishermen, providing them with life vests and mortuary bags,” explains Sylvie Fagard-Sultan, manager of MSF's mental health activities.

“Before the NGO started the search and rescue missions in 2016, the fishermen were the ones on the frontline,” she adds.

Anuar, the ship's mechanic, also a 27-year-old fisherman, recalls when he and the crew of a fishing vessel were abducted by Libyan militias in 2016.

"They fired at us from afar. They took the boats and brought us all in jail, beat us and stole everything from the boats: the engine, the technical appliances, everything," he says, just before starting the night fishing trip.

They fired at us from afar. They took the boats and brought us all in jail

Bourassine explains that at least two times a year Libyan militias abduct Tunisian fishermen and demand ransom money in exchange for their freedom.

According to Mongi Slim, a pharmacist and chairman of the Red Crescent in the governorate of Medenine, which includes Zarzis town, between 2011 and 2016 thousands of lives were saved by fishermen and the Tunisian coastguard.

Slim takes care of Medenine's migrant centre and for over 10 years has campaigned for a decent cemetery for the burial of anonymous migrants.

In 2015, 53 bodies of Syrians washed up on the coasts of Zarzis. “Before that day, the corpses would be quickly buried without police files, into the familiar cemeteries of Zarzis,” explains Slim.

As pointed out by Valentina Zagaria, a London School of Economics PhD anthropologist who has been conducting ethnographic research on migration and people lost in the Mediterranean, communal graveyards were not the norm.

“Zarzis was agglomerated into one city during colonial times, but before it was scattered into many villages and graveyards where [they were] held by families as per their tradition.”

According to Slim, in 2015, to find a solution for the large number of bodies that needed to be buried, the municipality of Zarzis donated a small piece of land on an old landfill to use as a graveyard for the unknown, and until now it is still being used.“Now police make a file for each body we bury in the graveyard,” explains Slim. “Even if there has been progress, we still face many problems: the graveyard is full right now; we do not have transportation for the corpses, and we do not have any identification system,” he says.

We should be scared of the living, not the dead

Chamseddine Marzoug, a former fisherman and volunteer for the Red Crescent, is one of the few people deeply involved in the burial of the unknown. “Here is where I buried a little boy that was five [years old],” he says. “But now there is no more space. Where should I bury these people? How is it possible that in 2017 we bury people in these conditions? In a dump?” he yells. “Is it because they are Africans? Because they are poor? This is racism, it’s unfair.”

"I believe that we should be scared of the living, not the dead," he adds.

Since 2016, fishermen have been dealing with this tragedy a little bit less thanks to the work of NGOs off the Libyan coast which save people before their boats sink, explains Slim.

It will be as it was before. We will be left alone in this strip of death

NGOs have rescued more than a third of all migrants brought ashore until August this year, compared with less than one percent in 2014.

But in August the situation deteriorated quickly after three NGOs including MSF suspended migrant rescues in the Mediterranean because they felt threatened by the Libyan coastguard and because the Italian government's new policies have made their work much harder. The Libyan coastguard has even opened fire on aid groups on the edge of Libyan waters. Yet MSF continues to offer medical and psychological aid for migrants who make it to shore.

Libyan coastguard officials have previously said they have rights over operations that are dozens of miles beyond the territorial limit of 12 nautical miles, stressing that it is necessary in order to control the rescue operations.

We could not find him. I will never forget that day

Tensions between aid groups and the Italian government have also mounted in the last few months, as prosecutors in Sicily opened investigations against some aid groups they suspect of facilitating people smuggling. Rome has also proposed a strict code of conduct governing how they operate at sea.

Two shipwrecks occurred in the Mediterranean in August and September, leaving hundreds dead.

“A man from Niger, alone, swam two days and managed to reach Tunisia; [most] of the others are dead,” says Marzoug.

Last week, Mecherek saved a rubber boat with around 100 people on board.

“And now we will just wait for the bodies of another 100 people," Marzoug says.

“It will be as it was before. We will be left alone in this strip of death," he adds. Migration
Libyan coastguard intercepts more than 3,000 migrants in past week 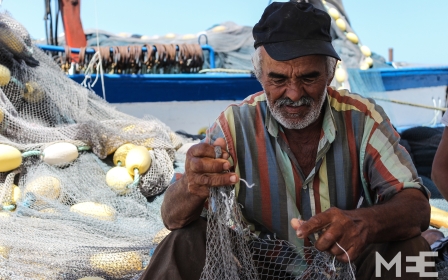