Where they no longer roam: Syria’s disappearing water buffalo

Raising water buffalo was a skill passed down the generations in northwest Syria, but the war has hit farmers and herds hard 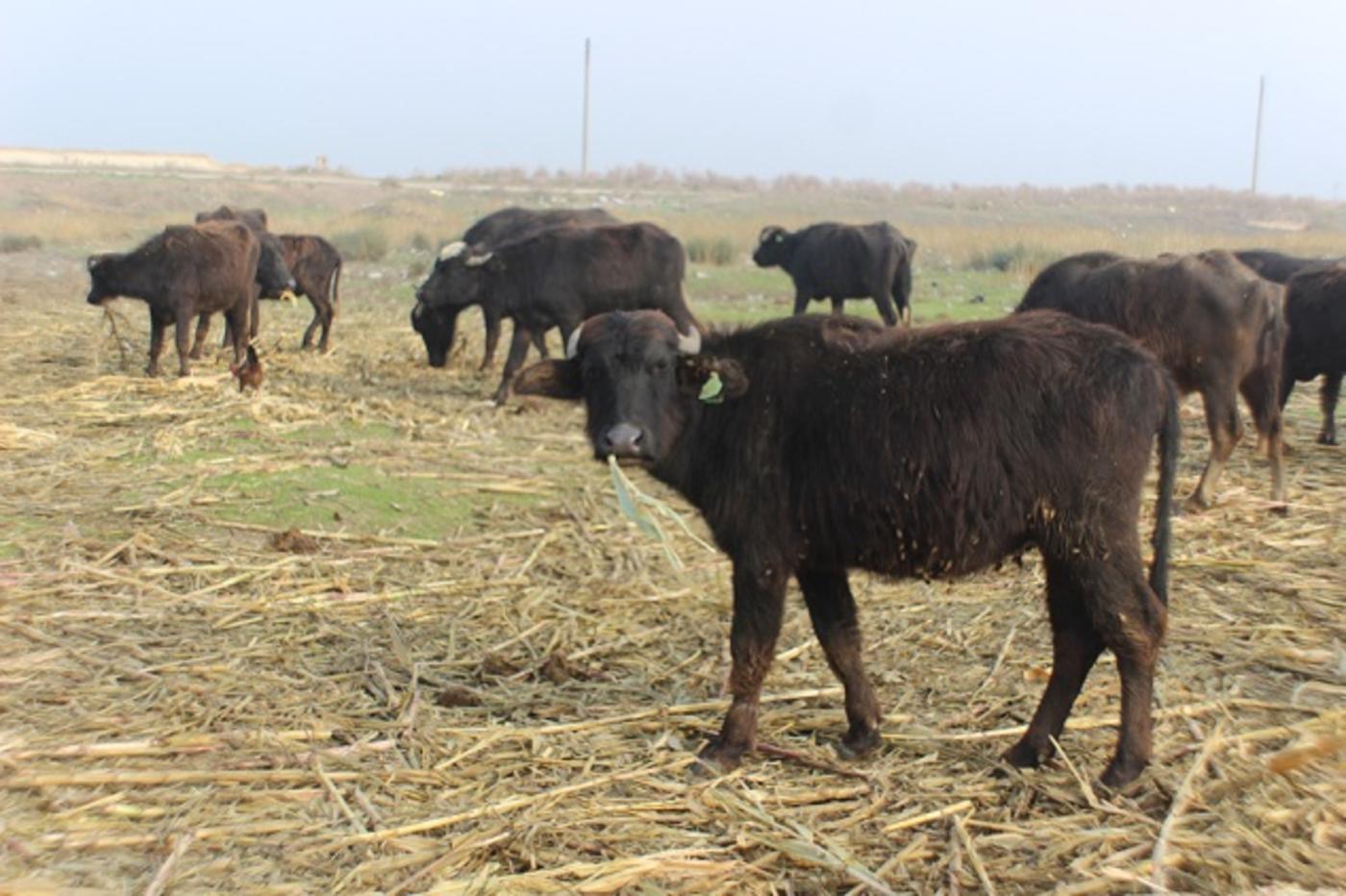 For as long as 22-year-old Alaa Omar can remember, his family has raised water buffalo in their northern Hama province village. For most of his life, Omar and his three brothers have risen from bed early to tend to the family farm, taking their herd of water buffalo to graze in the grasslands that surround their village.

Omar inherited the profession from his father, he said, who in turn learned to raise the cow-like, horned water buffalo in the fertile plains of northwestern Syria from his own father. In Sahel al-Ghab, a flat expanse of farms and grasslands that stretches across Hama and Idlib provinces, buffalo milk and cheese products were once an integral part of the local economy.

Today, however, Hama’s water buffalo are in a sharp decline, two local agricultural officials and a herder told Syria Direct. Seven years of war have destroyed farmers’ livelihoods in Sahel al-Ghab, with violence leaving some farms damaged and others empty. Owners have been displaced and their animals left behind to fend for themselves.

With some buffalo dying of malnutrition and others sold to slaughter by desperate farmers, entire families of buffalo herders have now lost their livelihoods or given up the trade altogether, a spokesman from the local, opposition-run agricultural directorate told Syria Direct.

The species of buffalo raised in Sahel al-Ghab was first introduced to Syria by traders from India in the 9th century, according to an undated report on the Syrian buffalo from the government-run Commission for Agricultural Studies.

The rivers, streams and rolling plains of Sahel al-Ghab are an ideal environment for water buffalo to survive, said herder Omar. 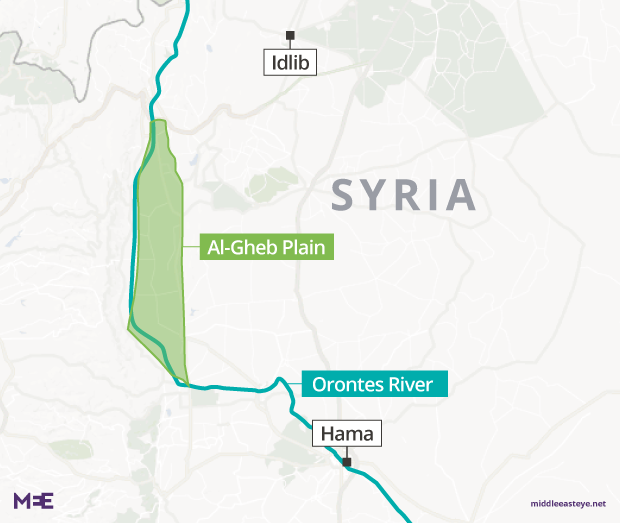 But today, the once-fertile pastures of Sahel al-Ghab are split between government and opposition control. For farmers like Omar who live in rebel-held Hama, many of the rivers, fields and grasslands that water buffalo thrived upon now fall on the other side of a frontline and are therefore inaccessible. Omar’s herd’s reduced ability to graze has significantly lowered their milk output, he said.

Before the war broke out, Omar’s family kept 150 buffalo on their farm in a-Shariah village. Now with the cost of living high and after selling much of their herd to survive while displaced for several months in 2013, the family can only maintain a herd of 16 or 17, said Omar.

The total number of buffalo in Sahel al-Ghab has shrunk to one-third of the pre-war population - from 600 in 2010 to just over 200 in 2017 - said Ishaq Ahmad, a spokesman from the Hama Provincial Council’s office of irrigation, agriculture and livestock.

“Three or four years after the revolution began, the buffalo population declined,” Ahmad tells Syria Direct. Displacement, bombings and farmers selling their animals for slaughter to make ends meet have all contributed to the decline, he said, with the current buffalo population in all of Sahel al-Ghab now at 220 animals.

“Today, you’d be hard-pressed to find a farm with two or three buffalo on it,” said herder Omar.

In areas like Syria’s Sahel al-Ghab, raising buffalo can be cheaper and easier than raising cows or sheep. Compared to cattle, water buffalo can better withstand hunger and subsist on lower-quality vegetation, according to a 2016 report on buffalo farming from the Australian government.

Buffalo also produce milk for a longer period than dairy cows, making them more economically viable for some Hama farmers, said Muhammad Enizan, a spokesman for the opposition-run agricultural directorate in a-Shariah.

Nutrient-rich buffalo milk and cheese products are a “favourite” of local residents, said Enizan. Sahel al-Ghab is known in Syria for its buffalo dairy products, including geimer - a buffalo cheese often eaten with honey or jelly.

As a farm animal raised for dairy rather than meat, buffalo must forage and graze in pastures to consume the nutrition necessary to produce large quantities of milk.

But these days, Omar told Syria Direct, “we can’t get to the large and well-known pastures anymore".

The Syrian government controls much of the territory west of a-Shariah village - including most of the Orontes River that snakes through Hama province - and many of the pastures and wetlands that Omar’s buffalo would usually roam and graze in are now on the opposite side of the frontlines between rebels and the government.

“We let the buffalo roam in a limited area - we rarely are able to leave it,” the herder said. Crossing the frontlines so buffalo can graze in pastures and swim in rivers is prohibitively dangerous.

Air strikes and shelling have also contributed to the decline of Hama’s buffalo herds in recent years. Bombings can kill animals and destroy farms, while farmers forced into displacement must often choose between keeping their livestock or a faster getaway with their family.

The Sahel al-Ghab region has witnessed several intense battles between government and opposition forces since 2011. In August 2015, heavy fighting in the Hama countryside and government air strikes on villages in Sahel al-Ghab paved the way for a “mass exodus” of civilian residents, Syria Direct reported at the time.

In the second year of the civil war, an artillery shell struck a farm owned by Omar’s uncle, he said. Three buffalo were killed, and the destruction on his farm was too extensive to rebuild. “He had to sell his animals - his farm was too damaged,” Omar told Syria Direct.

Government air strikes in Sahel al-Ghab drove Omar and his immediate family to flee their own farm in 2013 and seek safety in nearby Idlib province. They would not return home for three months, said the herder.

'Imagine someone has 20 buffalo at home. Does he flee to safety with the buffalo or with his family?'

But fleeing on foot from village to village with a large herd of livestock as bombs fell around them proved difficult. “We looked all over for a place to stay, but we couldn’t find anywhere,” said Omar. “Maybe someone will take you and your family in, but housing so many buffalo was another story.”

While displaced, Omar and his family sold the majority of their buffalo to farmers in southern Idlib. Now, with fewer buffalo, the prospect of fleeing if fighting were to resume is “less of a headache”.

Air strikes and fighting between government and rebel forces continue in northern Hama province, but the closest major battles to Omar’s village are 30km to the east.

Still, if major fighting does resume in Sahel al-Ghab, maintaining a herd of buffalo could be a liability for families like Omar’s, said opposition official Enizan.

“Imagine someone has 20 buffalo at home. Does he flee to safety with the buffalo or with his family?”