Yemenis are shocked by Houthis' quick capture of Sana'a 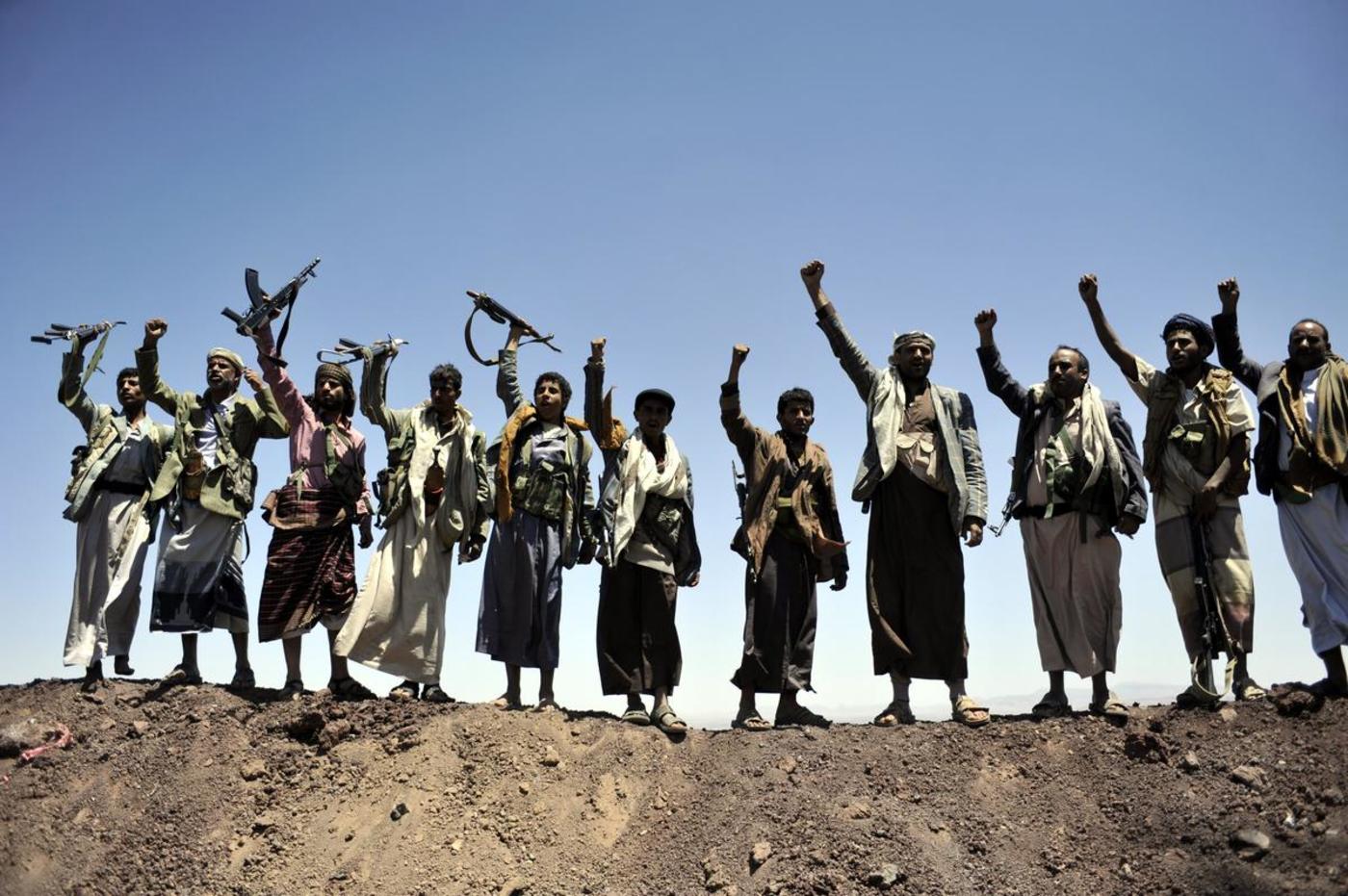 Houthi militants after they captured the headquarters of the Sixth Military Zone in northern Sanaa, Yemen on 22 September, 2014 (AA)
Par
Saeed Al-Batati

AL-MUKALLA: The Yemeni public's first reaction to the quick and easy capture of their capital by the Houthis was shock, utter disbelief and denial.

Many people here thought that if a small village called Dammaj in northern Yemen resisted the Houthi raids for months, the heavily fortified capital would have been able to fight back for years. It took northern Yemen Shiite rebels a couple of days to take over key government buildings and military buildings.

"I could not believe my eyes or ears," said Yahyia al-Warafi, an owner of a small grocery in the city of Ibb, southern Sanaa, told Middle East Eye. "But I was happy because there was not much bloodshed in Sanaa."

The Yemeni capital was pronounced as being under control of the Houthi rebels on Sunday - nearly a month after the beginning of their massive rallies in the capital. Initially, the Houthis mounted the protests to call for the resignation of the government, termination of fuel price decisions and implementation of transitional talks. The protesters blocked roads and camped out in the streets and outskirts of the capital.

For any person who has a strong grasp on the country, the situation is mind-boggling. Many observers here said that even if the army did not protect the capital, the remaining troops under the command of Ali Mohsen al-Ahmer and the militias loyal to the other powerful tribal leaders of Ahmer tribe would do so.

Ali Mohsen Ahmer, a former powerful army general, was a pillar of the government of the former president Ali Abdulla Saleh before defecting and joining opposition in 2011. This defection heralded a turning point in the anti-Saleh uprising and boosted many other generals to follow suit. Ahmer used to have thousands of troops under his command and Saleh assigned him to handle the six sporadic wars with the Houthis.

Just this week, his loyalists briefly fought the Houthis before surrendering.

Sadeq Ahmer and his brothers were the other powerful forces in the country that were supposed to repel Houthi raids. Sadeq is the head of the most influential and populous tribe in Yemen, Hashed. His brother Hamed is an oil and telecommunications tycoon and his money was the lifeline for anti-Saleh protests. These forces collectively challenged the former president when he was at the highest of his power but could resist the attacks by some armed militiamen on Sunday.

"They [the Houthis] attacked Ali Mohsen's forces with light and medium weapons and from zones controlled by al-Ahmer," a senior security officer told MEE on condition of anonymity.

Shortly after tightening their grip on the capital, the Houthis began storming houses of their long-standing opponents, such as some figures affiliated with the Islamist Islah party.

Armed men broke into the houses and looted the belongings of their opponents, including the home of Nobel Peace Laureate, Tawakul Karman, former minister of information, the minister of education and others, according to witnesses and owners of the houses. Some the rebels boasted about their actions by posting photos, the authenticity of which was not immediately verifiable, in the looted bedrooms to Facebook.

To make amends, some Houthis have admitted to their fighters' mistakes and tried to appease people's anger, Ali al-Bikhiti, a spokesperson for the group, had to crisscross the capital, visiting the looted houses and offering apologies to their owners on the behalf of the Houthi leader. The Houthis also distributed their mobile numbers and asked people to call them if any of their supporters broke into houses. Houthi activists posted photos on social media of their children playing in the yard of Ali Mohsen's mansion.

Surprisingly, the Houthis did not approach the houses of the former president or any of his close relatives or aides in the capital. Mr. Saleh spearheaded six sporadic wars against the Houthis and killed their leader Hussein Al Houthi in 2004.

Some analysts like Yasser Al-Yafae, the editor of the weekly Yafa'a News newspaper, think that the collapse of Amran province was the first tell-tale sign of Sanaa capture by the Houthis. Amran province has long been the stronghold of al-Ahmer tribes.

"What happened in Sanaa was predictable, especially after the fall of Amran province which represents the tribal and military dimension for Islah party," Yafae told MEE.

Yafae said army allegiances shifted between the rival forces that faced off in 2011.

"The Yemen army loyalties are divided between the Islah that fought Houthis and Ali Abdullah Saleh who aided them to control Sanaa."

The security official said that there are many collective reasons that led to the unexpected collapse of the security forces.

The other reason was recent military reshuffling, said the official, that dismantled the elite republican guard and alienated some of its qualified commanders.

"I think of those soldiers who were disgusted by the new government's methods and began making overtures with the Houthis."

The Houthi incursions in the capital claimed the lives of many people. The Ministry of Health said on Tuesday that emergency teams in the capital retrieved the bodies of 200 people were killed and 461 rescued from clashes between the Houthis and the army. At the beginning of Houthi rallies on 18 August, dozens of army soldiers and Houthi supporters died in fierce clashes between the two sides on the outskirts of the capital.

Yemen President, Abd Rabbu Mansour, on Tuesday refused to admit that the capital had fallen in the hands of the Houthis, despite the deployment of rebel fighters in each corner of the capital. "Sanaa did not and will not fall."

Hadi attributed the failure of army and security forces to protect the capital against the Houthi assaults to an "unimaginable conspiracy" by some figures that "lost" their interest or wanting to settle scores with opponents.

"We were stabbed and betrayed," Hadi said in a televised speech. "I promise you that I will do all my efforts and procedures to restore the state's dignity, its institutes and protect citizens. The coming days will be better and things will improve."

Despite agreeing that the Houthis have improved security in the country's most restive province, al-Warafi said that the Houthis could not make economic prosperity in their strongholds."Houthis are not capable of governing a country. Prices or gas cylinders and gasoline are double in Saada [province]."

"We will take our arms if they came to Ibb." he said. Inside Yemen
Shiite rebel seizure of Yemen capital a 'gift' for Tehran?