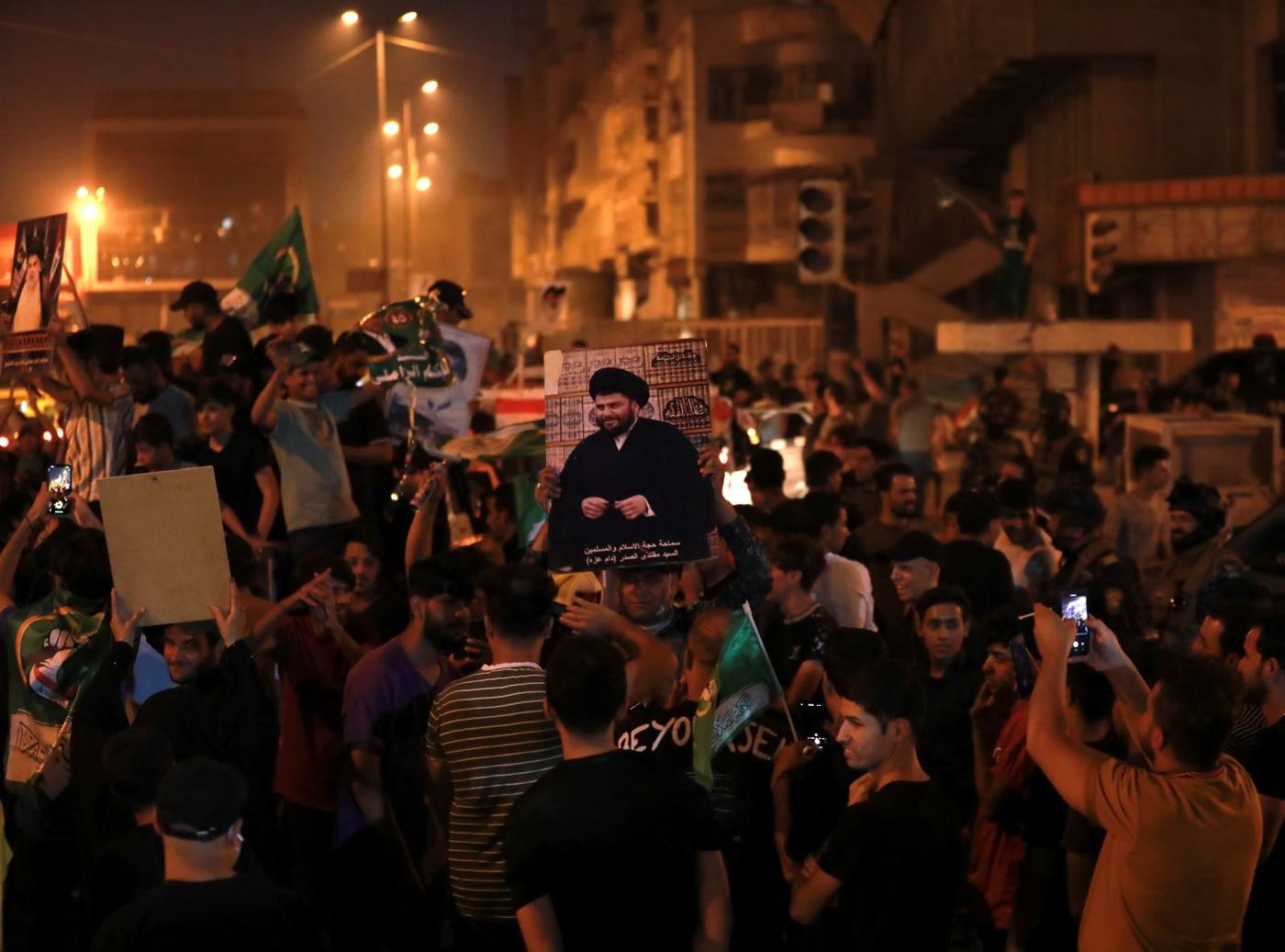 First expected to be released sometime before midnight on Sunday, Iraq's electoral authority has announced that preliminary election results will not be made public until 3 pm local time on Monday.

A total of 3,449 candidates are vying for 329 seats in the parliamentary elections, 83 of which have been reserved for women.

More than 250,000 security personnel across the country were tasked with protecting the vote and dozens of election observers deployed by the European Union and the United Nations monitored polling stations. 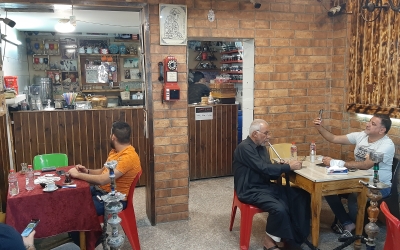 Still, voter turnout is expected to be reported at about 25 percent - a record low, even compared to the 44 percent turnout of Iraq's 2018 election, the results of which were widely contested.

Before announcing final results in this year's election, the Independent High Electoral Commission (IHEC) must adjudicate all polling day complaints. Political parties, coalitions and candidates have the right to appeal the final results to the Electoral Judicial Panel.

Negotiations to choose a prime minister tasked with forming a government are expected to drag on for months.

'We won't give it legitimacy': Iraq's youth boycott election
1 week ago

"We took to the streets (in 2019) to bring down the regime, not participate in it," Natiq al-Khafaji, one of the most prominent activists boycotting the elections tells MEE. "This (political) regime is murderous, criminal and corrupt, and we won't give it legitimacy by participating in the elections," Khafaji adds.

'This time, there is no cheating': Election staff tallies votes
1 week ago

With digital counts complete, printed out and on their way through the ether to Baghdad, in one Kirkuk polling centre, manual counting began around 7 pm.

It was still underway at 7.45 local time.

Iraqi High Electoral Commission (IHEC) observer Ghassan Jumal Ahmed, who is back observing the elections after almost a decade, told MEE that a lot has changed over the years in terms of fairness in Iraq's election.

"This is the second time I have taken the role of an election observer in Kirkuk and there are just so many differences between then and now," he said. "But the main, and most important difference, is that this time, there is no cheating and there is also no pressure put on voters. Back in 2010, there was considerable pressure from parties, even in the election centre itself."

The votes in a Kirkuk polling station are tallied up digitally and then recorded manually. As part of the process, the IHEC in Kirkuk had a "sample room" set up to check the basic accuracy of the electronic vote.

During the count, IHEC staff put to one side any ballot papers with "issues" or unclear results, to study them more closely and compare the manual count with the digital results. The count is then double-checked.

Middle East Eye's Tom Westcott observed eight spoiled ballots that had to be discarded in the Kirkuk counting room. Most were papers left entirely blank - "statement votes" that were merely consigned to the rubbish. One voter had chosen multiple candidates, another had one had ground the voting pen so hard into the paper it was spoiled. And one person seemed to have misunderstood the basic processes and had pressed their inked thumb onto their chosen candidate's number.

The whole process has been closely observed by IHEC observers, who certainly seem unafraid of voicing their opinions and interrupting if they see anything they don’t feel is being done as it should be. Mostly, these appear to be small matters.

Iraqi Prime Minister Mustafa al-Kadhimi hailed election day as a triumph on Sunday, less than an hour after the polls closed, announcing that his government "succeeded in fulfilling our promise and our duty in securing fair elections".

We have succeeded in fulfilling our promise and our duty in securing fair elections. I thank our people. I thank all voters, candidates, political powers, observers, IHEC staff, our brave ISF who provided security, the United Nations, and the marjiyya.

Kadhimi's office also reported that the premier had received a phone call from Masrour Barzani, prime minister of Kurdistan Regional Government (KRG), who thanked him for the "success of the 2021 legislative elections".

Polls close across Iraq: everything you need to know
1 week ago

Good evening, Polls have officially closed in Iraq, and the vote-counting is now officially underway. Here are the main takeaways from today's election so far:

Iraqi officials have said that local security forces have been given the power to impose full curfews if any violence occurs after the polls close.

Speaking to MEE’s Suadad al-Salhy, the officials said they were anticipating angry reactions that could devolve into violence from some groups should they not poll as highly as expected.

While turnout remained low in the afternoon, officials told MEE they were confident that "the participation rate will rise by the end of the day".

The senior official added that while preliminary results can in theory be announced half an hour after polls close, "in practice, this is not possible" - adding that the Iraqi government is bound to announce the results within 24 hours.

While Sunday has so far been relatively calm, the Iraqi government anticipates that tensions may rise if some factions do not accept the outcome of the election when results are announced.

Women compete for 25 percent of parliament seats
1 week ago

“I’m here today to vote, and I have just voted for myself,” Sawsan Jadou, one of four candidates for the United Iraq Turkmen Front running in Kirkuk, told MEE.

Jadou is one of more than 900 women running in the parliamentary elections, with 25 percent of seats reserved for women as part of a broader quota system based on gender and ethnic or religious affiliation.

Seven women - three party candidates and four independents - are competing for the one woman's seat in Kirkuk.

“Kirkuk is like a micro version of Iraq, with all its diverse ethnicities and its rich resources of the ‘black gold’ that is oil,” Jadou said. “Whoever are elected MPs for Kirkuk have a duty to work for the city and its residents, not for themselves and their own pockets.”

Activists calling for a boycott of the elections were organising a vigil in Nasiriyah's al-Habboubi square on Sunday.

"We took to the streets (in 2019) to bring down the regime, not participate in it," Natiq al-Khafaji, one of the most prominent activists boycotting the elections told MEE's Suadad al-Salhy.

"This (political) regime is murderous, criminal and corrupt, and we won't give it legitimacy by participating in the elections," Khafaji added. "We called for a national salvation government and laws to regulate the work of parties, disband militias, and prevent political blocs that have armed wings from participating in the elections - but they bypassed our grievances and did what they wanted."

Earlier this week, Iraqis spoke to Middle East Eye about their misgivings regarding the election, and whether they were planning to vote.

While many are deeply distrustful of the political elite, whom they see as corrupt, some believe voting is a duty to prevent the usual suspects from maintaining their grip on power.

Feeling a little out of the loop regarding today’s election? Read up on MEE’s coverage of the many issues at stake in the polls.

MEE columnists have also shared their analyses on what the elections mean:

Local media reports have been circulated of voting machines malfunctioning in Kirkuk and Nasiriyah governates, leaving some voters unable to cast their ballots.

MEE was not able to independently verify issues reported  in Kirkuk city, the Islamic State group's former stronghold of Hawija, and the Turkmen town of Altun Kopri.

Election commission authorities have said they were working to fix the voting machines.

But despite the rule change, observers noticed that the problem still persisted, especially with elderly voters.

The chairman of Iraq's election commission said the electoral devices malfunctions were "limited" and caused by "human errors".

Turnout picks up in Baghdad's Sadr City
1 week ago

Despite fears of a low turnout, at midday dozens of people, including whole families, were pouring into polling stations in Baghdad's sprawling Sadr City district.

Graffiti outside one polling station read "Knowledge kills ignorance", as voters searched for their names on registration sheets taped outside.

Khaled, 44, said he had voted for Muqtada al-Sadr's political party.

"I think - no, I am certain they are on the right path and will change things for the better," he said, displaying his ink-stained finger as proof of his vote.

"I'm sure they will [win] because they have a lot of popularity."

Security guards had been standing outside the polling station for 10 days.  Despite passes issued by the Independent Higher Elections Commission (IHEC), guards said no journalists were allowed inside the voting station, citing orders from Baghdad Operations Command.

Another voter, 22-year-old Yasser, said he had cast a ballot for Imtidad, the party founded by doctor and activist Alaa al-Rikabi associated with the anti-government protest movement.

"They have a roadmap they will work on," he said. "Gradually, bit by bit things will get better." 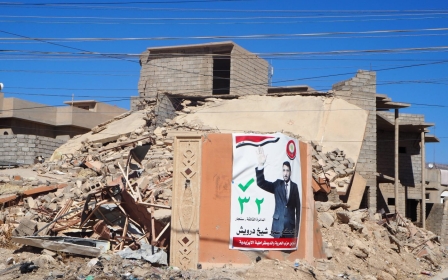