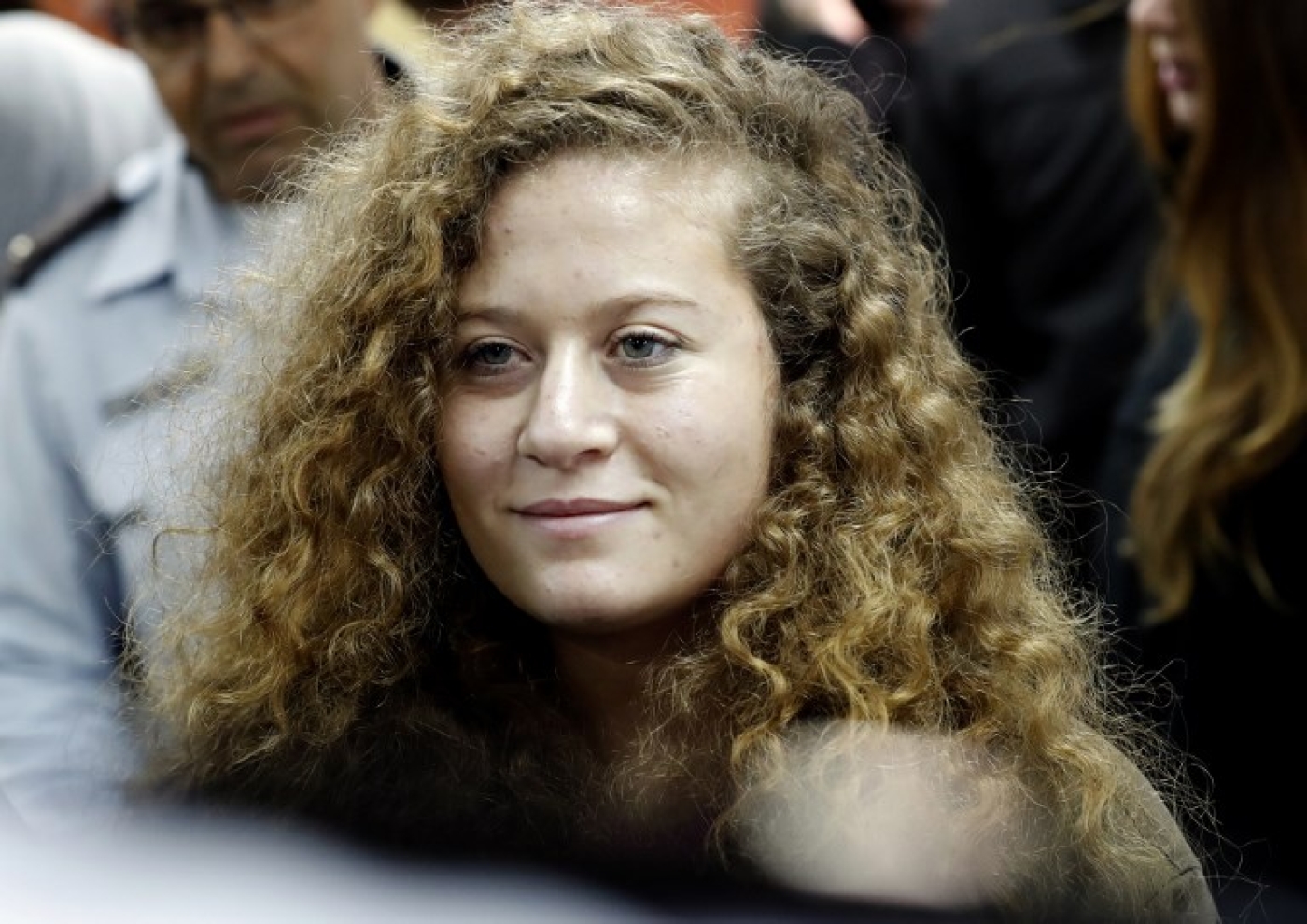 Ahed Tamimi, 17, became hero to Palestinians after 15 December incident outside her home (AFP)
By
MEE and agencies

Ahed Tamimi, the teenage Palestinian girl who was filmed kicking and slapping an Israeli soldier in the occupied West Bank, accepted a plea deal on Wednesday under which she will be sentenced to eight months in prison, her lawyer said.

Tamimi, 17, became a hero to Palestinians after the 15 December incident outside her home in the village of Nabi Saleh was streamed live on Facebook by her mother and went viral.

The soldiers had deployed during a weekly Palestinian protest in the village against Israeli policy on settlements in the West Bank, one of the most heated issues in the Israeli-Palestinian conflict.

Tamimi was 16 at the time of the offence. Her trial began last month and she faced 12 charges, including aggravated assault.

"No justice under occupation!" Tamimi, handcuffed and shackled, shouted out to reporters at court in the Ofer military prison, near the West Bank city of Ramallah.

Tamimi's attorney Gaby Lasky said that under the deal approved by the court, Tamimi will plead guilty to a reduced charge sheet that includes assault and would be sentenced to eight months in jail and pay a fine of 5,000 shekels (about $1,430). The Israeli military confirmed the details of the deal.

Lasky said the jail term included the time Tamimi has spent in detention since her arrest in December.

Tamimi's family are veterans of protests against an Israeli settlement near their home. An Israeli watchtower stands at the entrance to the village and there are often soldiers in the area. Her mother, Nariman, and a cousin were also arrested. Both have accepted plea bargains, a family lawyer said.

"When the European people see my daughter, blonde and blue-eyed, they are shaken, because they saw their children in front of them. It broke the stereotyped image of the Palestinian in the international community," Tamimi's father, Bassem Tamimi told Reuters.

The images of Tamimi striking the soldier had also made an impact on Israelis, who debated whether the officer should have hit back. The army said the soldier “acted professionally” by showing restraint but right-wing politicians described his behavior as humiliating.

"The honour of Israel's army cannot be trampled" Israeli Culture Minister Miri Regev said on her Facebook page after the incident. "We cannot have a situation in which soldiers are humiliated and hit and they do not act at that moment and arrest those who hurt them."

The Israeli army said in a statement after the sentence that it "will continue operating in order to preserve the security and public order in (the West Bank) and enforce the law as it pertains to anyone who harms (Israeli) soldiers and incites violence."

Tamimi's trial began on 13 February behind closed doors at the Israeli military court in the West Bank.

Lasky appealed to have the trial opened, but was rejected.

The court ordered the trial closed because Ahed was being tried as a minor, as is usual in such cases.

"When they decided to keep her trial behind closed doors, we knew that we were not going to get a fair trial," Lasky told AFP in describing her reasons for seeking a plea bargain.

The UN Office of the High Commissioner for Human Rights has criticised Israeli authorities' actions in the case, while the European Union has expressed concern over Israel's detention of minors, including Ahed Tamimi.

When they decided to keep her trial behind closed doors, we knew that we were not going to get a fair trial

"Ahed will be home in a few months, but Israel is putting this child behind bars for eight months for calling for protests and slapping a soldier, after threatening her with years in jail," Sarah Leah Whitson, executive director of the Middle East division of Human Rights Watch, said in a statement.

Tamimi's family says the 15 December incident that led to the arrests occurred in the yard of their home in Nabi Saleh, near Ramallah in the West Bank.

The Israeli military said the soldiers were in the area to prevent Palestinians from throwing stones at Israeli motorists.

The video shows the cousins approaching two soldiers and telling them to leave before shoving, kicking and slapping them.

The scuffle took place amid clashes and protests against US President Donald Trump's controversial recognition of Jerusalem as Israel's capital.

Palestinians want the West Bank for a future state, along with East Jerusalem and the Gaza Strip. Most countries consider Israeli settlements built on territory Israel captured in the 1967 Middle East war to be illegal.

Israel disputes that its settlements are illegal and says their future should be determined in peace talks with the Palestinians. Negotiations collapsed in 2014 and efforts by the White House to restart them have showed little progress.

Tamimi's case drew global attention. Amnesty International called her the "Rosa Parks of Palestine", and the small courtroom was often packed with journalists, diplomats and international observers during hearings.

A group of American cultural figures, including actors Danny Glover and Rosario Dawson and novelist Alice Walker, signed a petition calling for her release and comparing her case to those of "the children of immigrants and communities of color who face police brutality in the United States".