Teen says she will now seek to become a lawyer to help further the Palestinian cause, paying tribute to the women still incarcerated 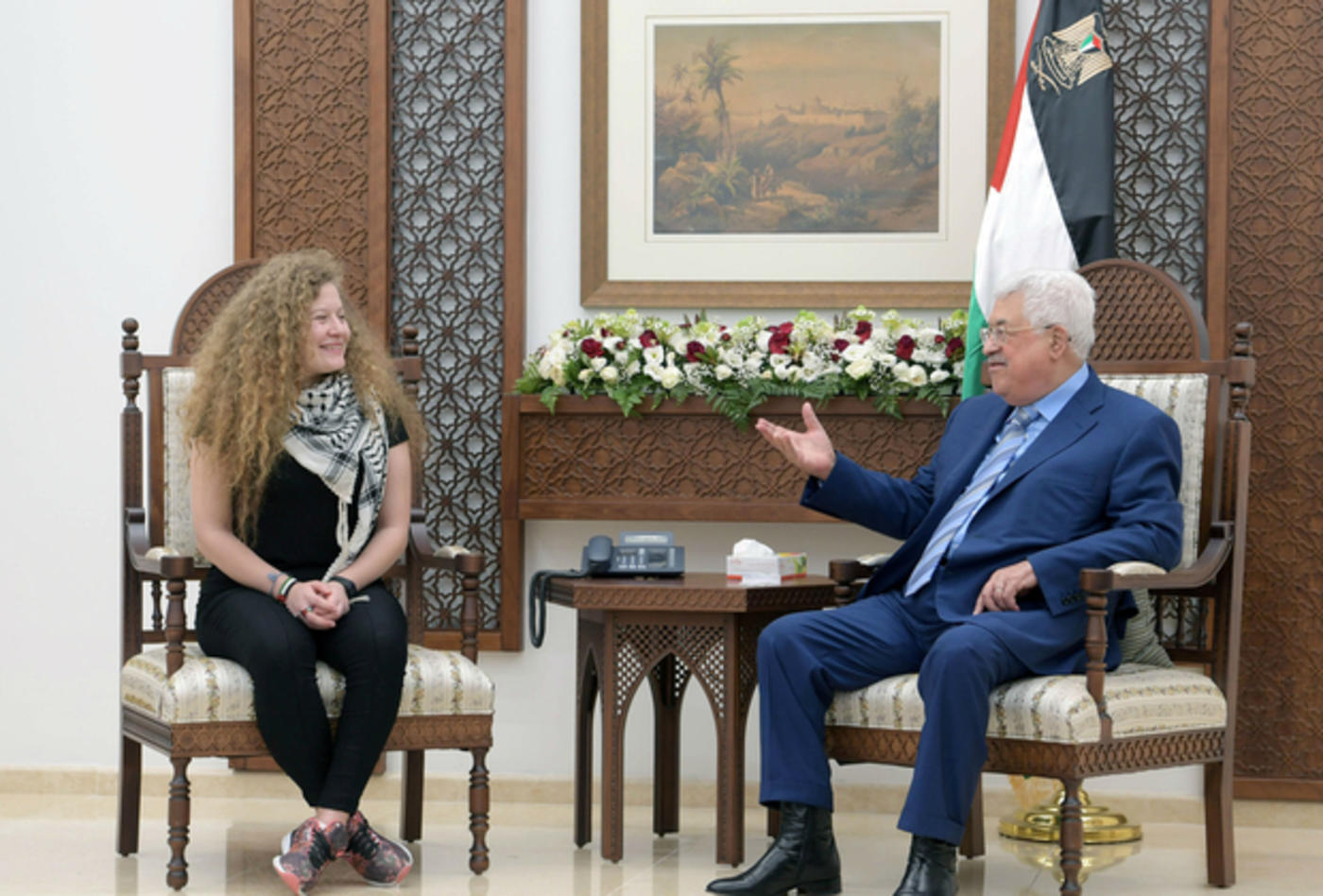 Ahed Tamimi, the Palestinian girl jailed for slapping an Israeli soldier and an icon of resistance against Israel’s occupation of the West Bank, was released on Sunday after eight months.

Tamimi, who was 16 at the time of her detention, vowed to continue her struggle against the Israeli occupation.

"I will continue my university tuition and I will study law so that I can address the cause of my country in all of the international forums and to be able to represent the prisoners' cause," Tamimi said at a news conference following her release.

"Prison taught me a lot of things, I was able to figure out the right way to deliver the message of my homeland," she added, stood beside a two-pronged tree which was mocked up as a slingshot with a tyre at its base - symbols of Palestinian resistance.

"Of course I am very happy that I came back to my family, but that happiness is partial because of the prisoners who are still in prison," she said.

Earlier, as she left Israeli custody, Tamimi paid tribute to all the Palestinian women currently incarcerated by Israel.

"All the female prisoners in jail are strong, and I thank everyone who stood by me while I was in prison," she told reporters, wearing the trademark Palestinian keffiyeh scarf.

All the female prisoners in jail are strong, and I thank everyone who stood by me while I was in prison

Tamimi’s case made headlines around the world when she was arrested following an altercation with Israeli soldiers who refused to leave her home in Nabi Saleh, a village in the West Bank.

Just hours before the soldiers arrived at the Tamimi home on 15 December, the family were informed that Israeli forces had shot Ahed’s 15-year-old cousin Mohammed in the head.

Distressed, the family demanded that the soldiers leave its home. When they refused, Ahed lashed out.

Her mother live-streamed the event on Facebook, and when the Israeli authorities used the recording as evidence to arrest Tamimi the teenager became a cause celebre for supporters of the Palestinians.

Tamimi has garnered support from around the globe.

Amnesty International condemned the arrest, saying it violated international law and underlining that the detention of minors should be used only as a last resort.

Israel is at present detaining some 300 minors.

Human Rights Watch's Omar Shakir tweeted on Sunday that "Israel's jailing of a child for 8 months - for calling for protests and slapping a soldier - reflects endemic discrimination, absence of due process and ill-treatment of kids.

"Ahed Tamimi is free, but 100s of Palestinian children remain locked up with little attention on their cases," he added.

Palestinian President Mahmoud Abbas has hailed the teen, while soon after her detention a cross-party group of British MPs released a statement saying she had been "targeted" and decrying the Israeli tactics.

In the face of such media scrutiny and criticism, great tension surrounded Tamimi’s release.

We are all Ahed Tamimi
Nada Elia
Read More »

Keen to avoid the press, the Israeli authorities changed the location and time of her release three times.

Originally she was due to be set free at the Jibara check point near Tul Karem. Israel finally settled on saying it would release her at the Rantis checkpoint, an hour's drive from there, leaving her relatives scrambling to reach the location in time.

Dozens of relatives, her immediate family and her friends, had waited for Tamimi since early on Sunday, along with many journalists.

Opponents of Tamimi gathered too, with Israeli settlers, who live illegally in the occupied West Bank, appearing to wave the Israeli flag.

When Tamimi was finally released, her father Bassem put his arms around her and led the teenager through the crowd of journalists and supporters, who chanted: "We want to live in freedom".

From the Rantis checkpoint, Tamimi headed to the tomb of Palestinian leader Yasser Arafat in Ramallah, where she laid some flowers.

Then she visited the home of a relative who had been shot dead by Israeli forces during a demonstration.

Poster near her home reads “One thousand congratulations on your freedom, the icon of popular resistance Ahed Tamimi” pic.twitter.com/QYayyOYTge

Tamimi also met Abbas, who described her subsequently as "a model of peaceful civil resistance..., proving to the world that our Palestinian people will stand firm and constant on their land, no matter what the sacrifice".

On Saturday, Israeli police detained two Italian artists and a Palestinian for painting an enormous mural of Tamimi's face on the Israeli separation wall at Bethlehem.

According to an Israeli police statement, the three were arrested "on suspicion of damaging and vandalising the security fence in the Bethlehem area".

The statement said the three, who were masked, "illegally drew on the wall, and when border policemen took action to arrest them, they tried to escape in their car, which was stopped by the forces".

The Israeli police intervened despite the four-metre mural being painted on the Bethlehem side of the wall, which ostensibly is supposed to be under the control of the Palestinian Authority.

Painting on the wall is a common occurrence, with icons of the Palestinian resistance such as Arafat and Leila Khaled being depicted by artists.