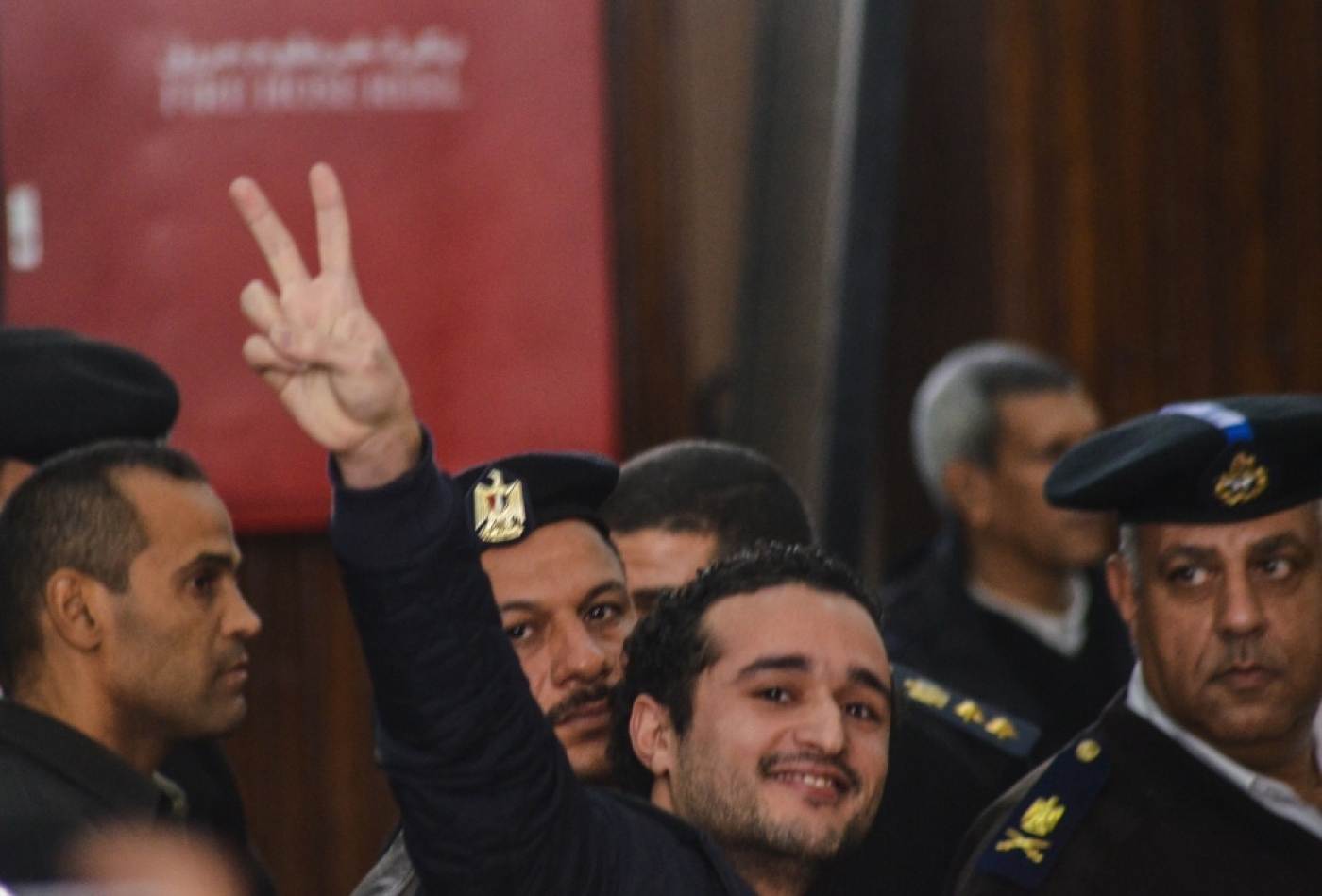 Ahmed Douma, the only defendant to appear in court, was sentenced for role in 2011 revolution (AFP)
By
MEE staff

A court in Egypt sentenced 230 people, including prominent anti-Mubarak activist Ahmed Douma, to life in prison on Wednesday.

They were sentenced over their alleged role in December 2011 events known as the “Cabinet clashes”.

Following the uprising that toppled long-time president Hosni Mubarak, 17 people were killed when police violently broke up a sit-in outside the headquarters of Egypt’s Cabinet office in the capital Cairo.

The 229 other defendants who received life sentences were sentenced in absentia.

Thirty-nine minors, who were under 16 at the time of the alleged offence, received 10-year sentences also handed down in absentia.

Douma and the other defendants were accused of provoking the security services who were attempting to protect the Cabinet office, and Douma was alleged to have encouraged other protesters to destroy public property.

The activist, a member of the Youth for Justice and Freedom movement, later confessed to throwing Molotov cocktails at army personnel, saying it was done in “self-defence” after troops began firing on protesters.

"Mass trials and sentences run counter to the most basic democratic principles and due process under the law," said State Department spokeswoman Jen Psaki, adding it "seems impossible that a fair review of evidence and testimony could be achieved under these circumstances."

"The EU calls on the Egyptian authorities to respect their international obligations, and ensure the right to a fair trial," it said in a statement.

Nourhan Hafzi, Douma's wife, said after the sentencing that the judgement had been far harsher than she expected.

"I expected the sentence to be vindictive, but I never imagined it would go this far, especially since the case does not merit a life sentence."

On Wednesday Douma laughed and broke into applause from the dock as the judge, wearing dark sunglasses, read out the sentence.

After Douma’s outburst, judge Mohammed Nagi Shehata threatened to add a further three-year jail sentence to the term for “insulting the courtroom”.

Witnesses in the court said that Douma replied saying, “This is enough. I am happy with the verdict.”

As he was escorted from the courtroom, Douma smiled at supporters and flashed the victory sign.

Under Egyptian law, a life sentence is usually taken to mean 25 years.

However, Douma faces a total of 31 years in prison, according to Egyptian news site Masrawy.

He was sentenced to three years in December 2014 after asking Judge Shehata - who passed down the life sentence on Wednesday - about political views expressed on the judge’s Facebook page.

He received a further three-year sentence in January 2015 for breaking Egypt’s controversial protest law, which could now be amended after a request from the UN, according to privately owned daily al-Watan.

Ashraf al-Ashmawy, an Egyptian representative at the UN, said Egypt had agreed to change the law, which gives authorities the power to ban any protest and break up demonstrations using lethal force.

The Egyptian Centre for Economic and Social Rights, an independent monitoring group, said that the defendants’ legal team had all been prevented from entering the court on Wednesday to hear the verdict being passed down.

The group’s defence lawyers originally withdrew last November, saying they had been “terrorised” by the court and prevented from responding to their clients’ requests.

The defence team’s statement following their withdrawal was referred to the country’s prosecutor for investigation, after the court dubbed it “insulting”.