Aid 'piling up in Damascus warehouses' as besieged Syrians starve

As world leaders gather in London to raise funds for Syria, siege monitors and NGOs say lack of money is not the problem 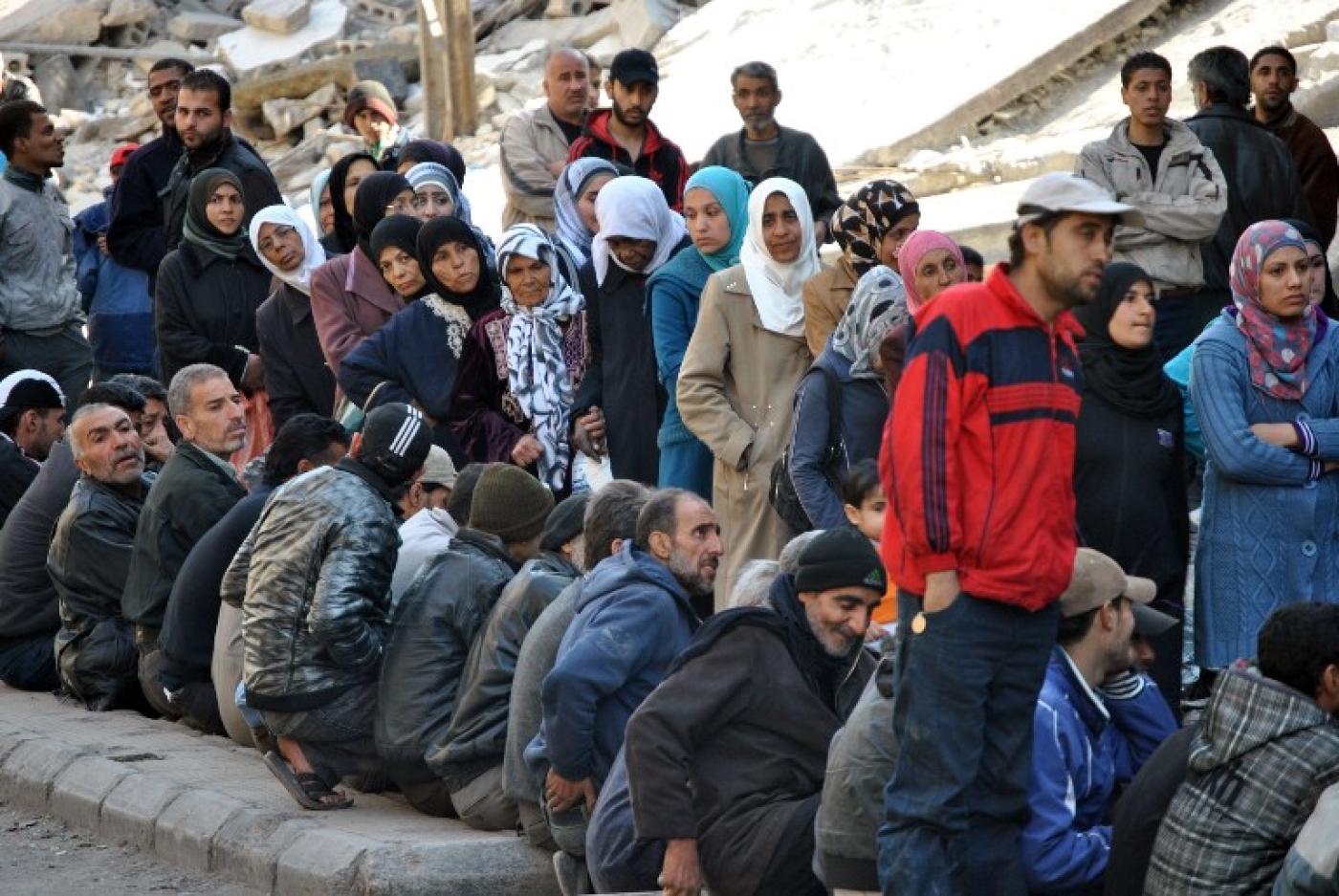 Waiting for food in the besieged Yarmouk refugee camp, outside of Damascus, in 2014 (AFP/HO/SANA)
By
Dania Akkad

Money alone will do little, if anything, to improve conditions for as many as two million Syrians who remain besieged, aid workers, siege monitors and a former US ambassador to Syria told Middle East Eye.

As world leaders gathered in London on Thursday to raise more than $9bn for Syria, mass starvation and gruesome sieges are set to intensify and, without a political process in place, the world needs to prepare for similar tragedies ahead, they warned.

In the weeks since Madaya - the besieged Syrian town where residents said they were eating leaves, pets and grass to survive - caught the world’s attention, at least 16 more people have starved to death, despite aid coming in.

“The regime is not going to surrender,” said Robert Ford, former US ambassador to Syria from 2011 to 2014 and now a senior fellow at the Washington-based Middle East Institute. “This is going to be a long war. Not a short war. We’re not near the end. We may still be only in the first half.”

A senior staffer with NGO Doctors Without Borders (MSF), who asked to remain anonymous for his safety, told MEE this week that "there is general silence and ignorance of the level of suffering and exposure to death in all besieged zones of Syria”.

“As a result, there is little anticipation to put a larger focus on other besieged areas that are exposed to the same horrific situation as Madaya,” he said.

An advocacy group campaigning for the protection of Syrian civilians and which regularly speaks with activists in besieged Syrian communities backed this up, saying that the amount of aid was not the issue.

“All of our sources are telling us that aid is piling up in warehouses in Damascus and is not being distributed,” said Henrietta McMicking with The Syria Campaign. “So it’s not getting through and there doesn’t seem to be even the will to do something about it.”

There are differing figures for the number of Syrians besieged across the country.

The UN Office for Coordination of Humanitarian Affairs (OCHA), in its most recent figures, put the number at almost 490,000 in 19 locations, while Siege Watch, a monitoring network, says there are almost 1.1 million in 52 sieges. MSF puts the figure as high as two million besieged.

Most sieges are enforced by the Syrian government and are located around Damascus, though rebels and the Islamic State (IS) group are also besieging towns.

Despite the fact that some areas of Syria have been besieged since 2012, for many, it was the media coverage of Madaya that brought the issue of Syrian sieges into the limelight - and raised public questions about whether the UN's OCHA was too close to Damascus to be effective.

Critics have charged that in an effort to keep the relationship with Damascus relatively positive, OCHA has given the government too much leeway, asking for permission to deliver aid to besieged areas when UN resolutions already gave it the right to do so. In 2015, only 10 percent of its requests for convoys were approved and fulfilled.

Late last year, as Middle East Eye first revealed, OCHA’s Damascus office allowed the Syrian government to edit the word "siege" out of a key report to be used for this week’s donor conference.

Ford said the closeness between the UN and the International Red Cross with the Syrian government had been a long-time concern for him.

“And they just kind of looked at me and said, ‘But we have to work with him.' I said, 'Well, but you can't. Your space will be closed out as the fighting gets worse and people will starve to death.'”

“I do not excuse what Ahrar al-Sham and Jabhat al-Nusra are doing in Fuaa and Kefraya,” Ford added, referring to two Shia villages that rebel groups have besieged since last October.

The situation has fanned divisions, with the main Syrian opposition groups, now refusing to attend further peace talks until the humanitarian situation, and especially the sieges, are resolved.

But what has happened, said MSF’s senior staffer, shouldn’t be surprising and reflects wider problems with the humanitarian system. “Because the UN and the ICRC are mandated organisations, they can hardly develop clandestine humanitarian operations,” he said.

“This is why they have access to besieged zones only when and where Bashar al-Assad’s government will authorise them.”

OCHA’s head, Stephen O’Brien, hit back at criticism last week, telling the UN Security Council that it had left the Syrians "with no hope".

“The continued suffering of the people in Syria cannot be blamed on humanitarian organisations and staff; rather, it is the failure of both the parties and the international community that have allowed this conflict to continue for far too long,” O’Brien said in a statement. “Humanitarian action cannot be a substitute for political action.”

As blame is passed and cast, what is the solution for besieged Syrians?

Many had looked to the Geneva talks to kick off a political process that could eventually end the sieges as part of a final peace.

And even before it would participate in talks, the leading Syrian opposition group demanded that the international community give assurances that it would implement already adopted UN resolutions, ending air strikes and sieges in the country.

“The US has been unable to get a can of milk to a starving child in Madaya,” Riad Hijab, the head of the High Negotiations Committee, told CNN last week. “Is the international society really serious to accomplish a peaceful transition in Syria?”

On Wednesday, as Russian and Syrian government forces advanced towards Aleppo and just hours before the donor conference kicked off, UN Envoy Staffan de Mistura put a temporary pause on the process that had yet to bring the government and the opposition into even indirect talks.

Some have argued that aid drops – including OCHA’s O’Brien and British MP Jo Cox and former Liberal Democrat leader Paddy Ashdown - could be a solution as long as peace remains elusive.

If the US was able to drop aid to the Yazidis on Mt Sinjar in Iraq and coalition forces can drop bombs on IS, why not aid to besieged Syrians, they ask.

“My advice would be that all options be considered as we must find a way to break this impasse,” O’Brien wrote in a letter to the International Development Secretary, Justine Greening, seen by the MEE, last month.

“The idea that people are dead since the last aid drop [to Madaya] and you are not trying it?” said McMicking of The Syria Campaign. "If that is the only way to get aid through, we definitely back it.”

But both UK Department for International Development and US State Department officials have told MEE over the past week that, while they haven’t completely discounted aid drops, the risks involved - including coordination with authorities for air space safety, establishing clear areas to drop the aid and protecting civilians who will access the drops - make them unlikely.

As the government has successfully used sieges as part of its military strategy, it is highly unlikely that it would allow Western governments to drop aid from its air space, meaning that the issue would go to the UN Security Council, he said.

“What do you think the odds of the Chinese and the Russians not vetoing a resolution like that are?” Ford said.

Short of changing the UN Security Council, there would be only two roads left, Ford said.

One could spark outright combat with the Russians, something that the Americans are loathe to do, while the other would see the Americans seriously step up arms delivery to the opposition in an attempt to shift the balance of power on the ground.

“I would be much happier if the armed opposition could break some of these sieges by winning some battles on the ground,” Ford said. “I know that’s harder with Russian air power involved, but I can’t help but think that, short of surface-to-air missiles, there are other things that the US or our regional friends could do to help the armed opposition overcome the Russian air power advantage.”

Meanwhile, some say the only way to continue to reach besieged Syrians in most need of help is through unofficial channels and underground networks that have developed over the years of war, as isolated communities have sought out help to survive.

“Today, if you don’t take risks in Syria," said the senior MSF staffer, "there is no way you will have a humanitarian impact." 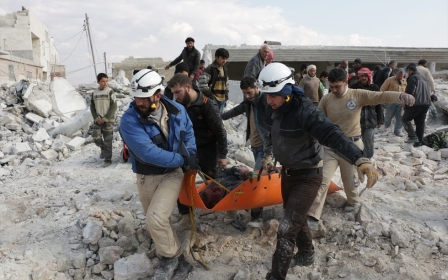 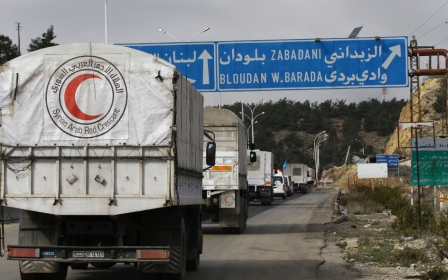 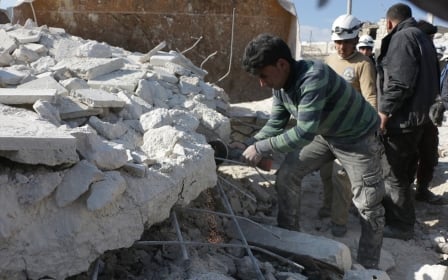