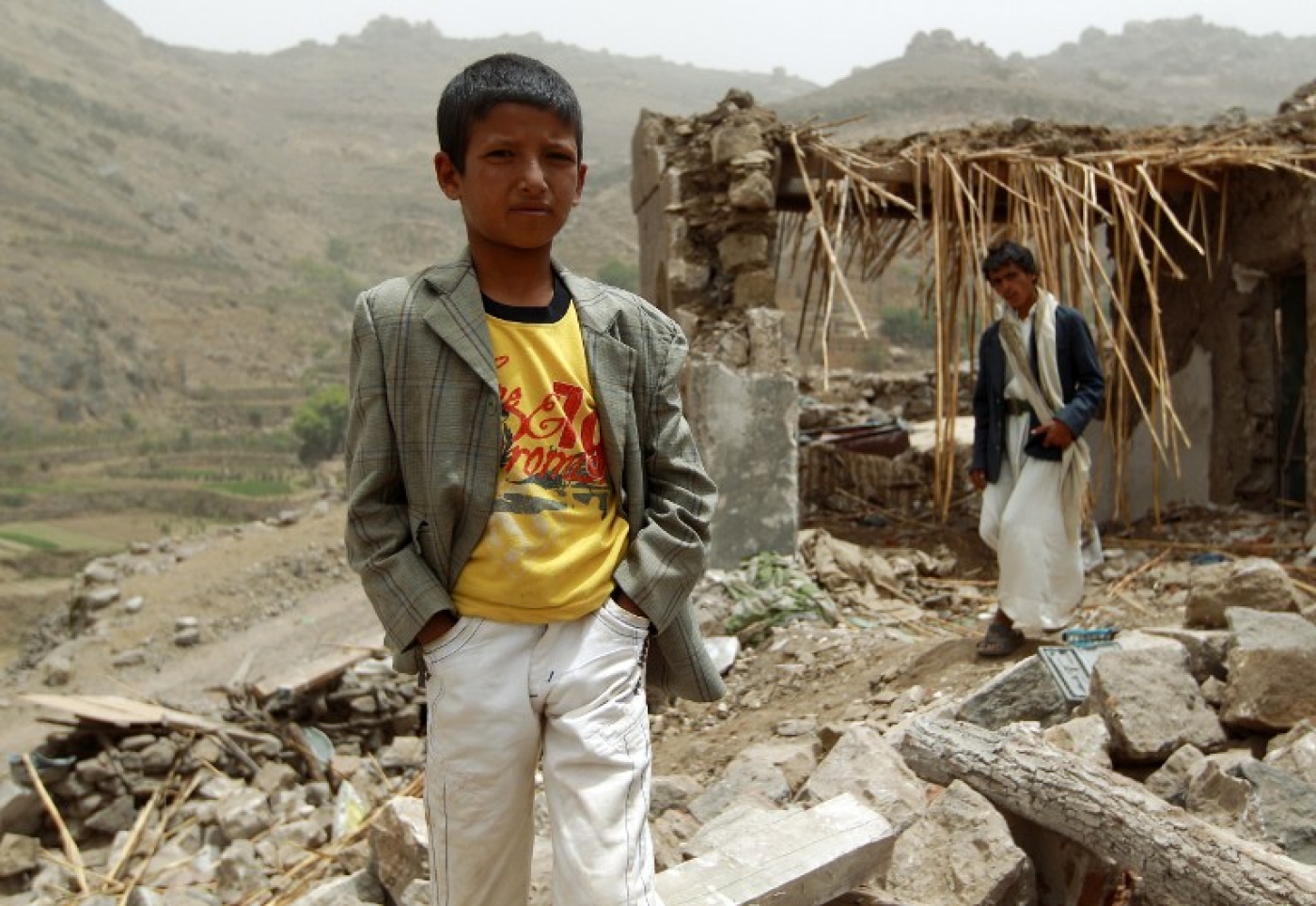 A boy stands in front of a damaged house in the village of Bani Matar, 15 miles west of Sanaa, a day after it was reportedly hit by an airstrike by a Saudi-led coalition April 4, 2015 (AFP)
By
Tom Finn

When Ahmed Juman arrived at the village of Beit Rejal in the mountains west of Yemen’s capital Sanaa on Monday, he found a middle-aged man kneeling on the ground next to the ruins of a destroyed house.

Juman, a tribal sheikh in his early 30s, had been praying at a nearby mosque earlier that day when fighter jets screamed overhead. Three blasts had echoed across the valley. Juman saw white smoke rising above Beit Rejal.

The man he found kneeling in the dust was Hussein Abdullah, a 60-year-old goat herder. Next to him, wrapped in blankets, were the bodies of four children.

A missile, Abdullah told Juman, had struck his house and the roof had caved in. Aside from his eldest son, Khaled, who escaped the collapsing house through a window, Abdullah’s entire family had been killed.

Late last month, Saudi Arabia and nine other Arab states launched an air campaign to reinstate the government of President Abd Rabbuh Mansour Hadi and roll back Houthi militants who had overrun much of the country.

Sending fighter jets to bomb airports, army bases and missile depots seized by the Houthis, the Arab coalition has enforced an air and naval blockade and dropped weapons to pro-Hadi militias in the southern port of Aden.

Airstrikes have hit critical infrastructure. A dairy factory, a high school, a ministry building and a camp for the displaced were reportedly struck by missiles in the past week.

More than 500 Yemenis have been killed, including 77 children, according to the United Nations Children's Fund (UNICEF). As the death toll rises, analysts say, the campaign risks widening the gap between north and south and between Sunni and Shiite areas in Yemen.

“People in the south see the bombing as necessary to halt the Houthis who are advancing on Aden,” said Abdullah al-Faqih, a professor of political science at Sanaa University. “In the north, where people are bearing the brunt of the bombing, resentment of Saudi Arabia is growing.”

As the airstrikes intensify and the blockade prevents aid groups from delivering essential supplies, Saudi Arabia confronts a worrying prospect: Yemenis who once stood against the Houthis are being pushed into the arms of the militia the oil-rich kingdom seeks to defeat.

The son of a prominent sheikh, Ahmed Juman grew up on a coffee farm close to Beit Rejal in the rugged mountain range that separates Sanaa from Yemen’s Red Sea coast.

In 2011, when mass protests broke out against then-president Ali Abdullah Saleh, Juman and a group of tribesmen left the village and joined demonstrators at a sit-in in the capital. A year later, Juman voted for Hadi in a one-candidate election that was part of a deal engineered by Saudi Arabia and the US that saw Saleh step down in exchange for immunity.

“We had high hopes for Hadi,” Juman said. “He promised us he'd unify the country.”

Last autumn, when the Houthis, a predominantly Zaydi Shiite group from Yemen’s north, swept into Sanaa and toppled Hadi’s government, Juman again took to the streets in protest.

“The Houthis came saying they were restoring the revolution… they said they would deliver justice, end corruption. Now we see they planned to steal the revolution,” said Juman.

Juman says he continued to support Hadi, even when he fled to Saudi Arabia last month and called on Yemen’s Gulf neighbours to intervene in Yemen. But that changed on Monday when Beit Rejal was bombed, and not just for Juman.

“What happened in Beit Rejal constitutes a violation of human rights,” he said. “I knew the people who were killed. They had nothing to do with politics, they only cared about their land and farming it.”

As a leader in his village, Juman has spent the past days managing the fallout from the missile attack. Some of the victims’ families have demanded that Juman exact compensation from the Yemeni government for destroyed farmland and homes.

While the rest of the village mourned the victims, a few of the men took up arms and left.

“We don’t know where they went, some say they joined the Houthis in Sanaa,” said Juman.