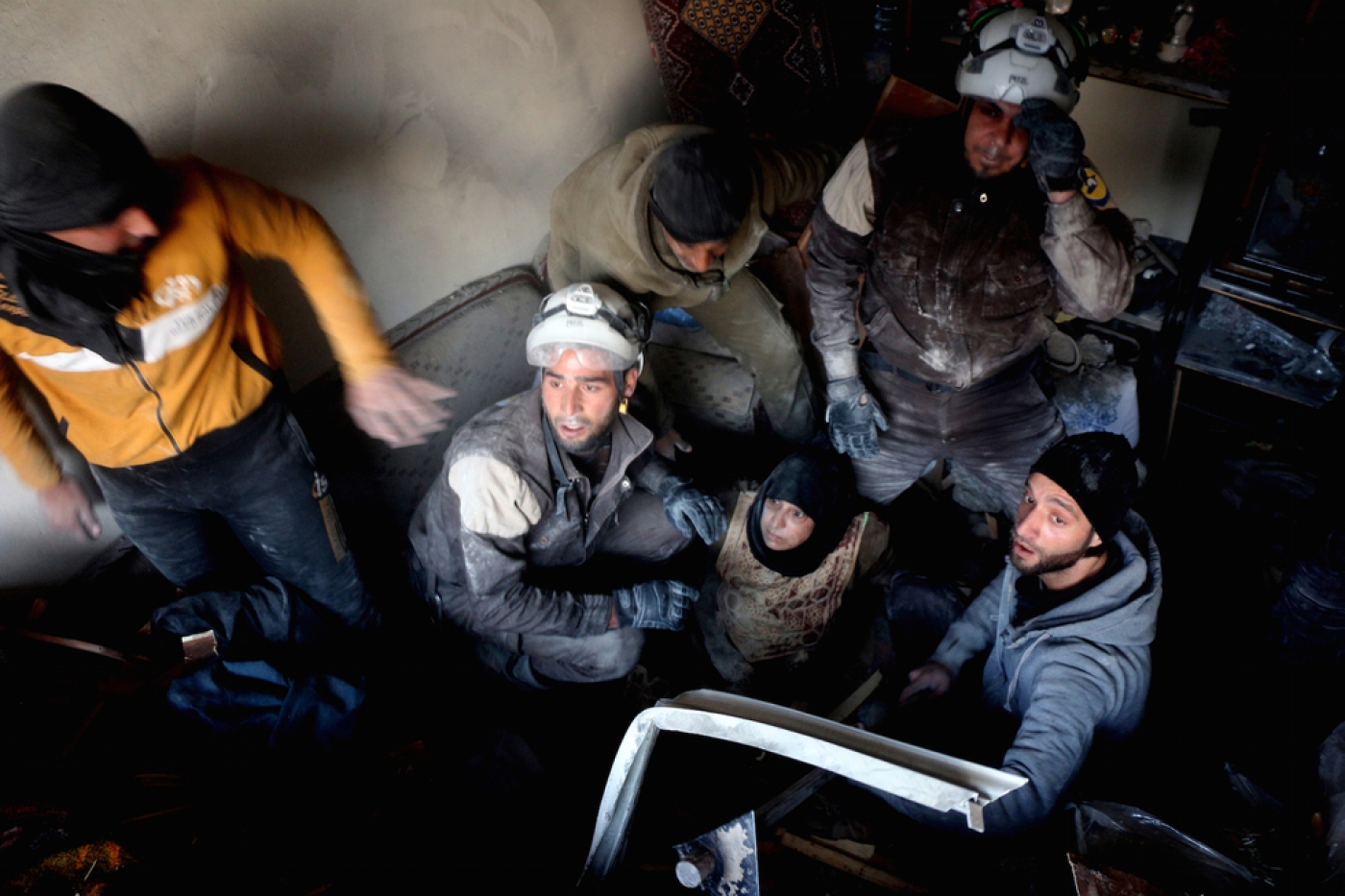 Syrian civil defence volunteers, known as the White Helmets, rescue a woman from a building following reported airstrikes on Aleppo's rebel-held district of al-Hamra (AFP)
By
MEE and agencies

Syrian pro-government forces pushed forward inside rebel-held Aleppo on Tuesday, prompting civilians to flee, as the government pressed an assault to recapture the entire city.

A week into the latest round of fighting for the city, Syrian troops had taken control of a third of the key eastern neighbourhood of Masaken Hanano, the Syrian Observatory for Human Rights said.

Heavy bombing has knocked out hospitals in eastern Aleppo.

The renewed fighting has killed more than 140 civilians in east Aleppo and comes amid international concern for the fate of over 250,000 civilians trapped in besieged rebel-held areas.

But despite condemnation from Washington and the UN, there was little sign that the government advance would be halted.

Recapturing east Aleppo, which rebels seized in 2012, would be the government's biggest victory yet in the conflict and deal a potentially decisive blow to the opposition.

READ:Starvation in Aleppo: 'I just hope to die and disappear'

The city was once the country's economic powerhouse, but it has been ravaged by the war that has killed more than 300,000 people since began with anti-government protests in March 2011.

For the past four years, it has been divided between the government-controlled west and rebel-held east.

Masaken Hanano has been heavily shelled during the war. Many of its residents have long abandoned their homes, but the latest fighting has prompted even the last holdouts to flee.

Milad Shahabi, a member of the local council, told AFP overnight that "civilians started to flee the neighbourhood", heading to southern parts of the rebel-held east.

"We are looking for empty houses to accommodate them," he said.

The neighbourhood is symbolically important, as it was the first district in the city to fall to rebels in 2012, but is also strategically key.

"If they take control of Masaken Hanano, the government will have line-of-fire control over several rebel-held neighbourhoods and will be able to cut off the northern parts of rebel-held Aleppo from the rest of the opposition-held districts," Abdel Rahman said.

The government advances added to a growing sense of despair in the east of the city, which has been sealed off from the outside world since the army surrounded it in mid-July.

No food aid has entered since then, prompting food and fuel shortages, and electricity and water supplies are erratic.

Rebels have tried several times to break the siege on the east, without success, and one European diplomat said it seemed only a matter of time before the city fell to government forces.

"Now, it's just a question of how long they (rebel forces) can hold on," the diplomat said, speaking on condition of anonymity.

"There is nothing to eat, no more hospitals and the bombardment is non-stop. They are under very strong pressure."

The Observatory says 141 civilians, including 18 children, have been killed in east Aleppo since the latest assault began on 15 November.

Another 16 civilians, including 10 children, have been killed in rebel fire on western Aleppo, the monitor says.

The Syrian army on Tuesday accused rebelseast Aleppo of possessing food stores and told them to distribute rations to alleviate shortages.

The existence of such food stores could not be verified. On 10 November the United Nations said aid workers were distributing the last available food rations in east Aleppo.

"The general command of the armed forces calls upon militants in the neighbourhoods of east Aleppo to open ration warehouses and distribute food to those that need it," an army statement said.

"The situation is horrific, catastrophic," he said Monday.

The UN's aid chief Stephen O'Brien slammed the use of sieges in Aleppo and elsewhere in remarks to the Security Council on Monday, saying nearly one million Syrians were living under blockades.

"Civilians are being isolated, starved, bombed, denied medical attention and humanitarian assistance in order to force them to submit or flee," he said.

READ: Trump: What will he do with Syria, Iran, Israel?

O'Brien condemned this "deliberate tactic of cruelty" and said the sieges were mostly perpetrated by government forces against civilians.

The UN's Syria envoy Staffan de Mistura was in Damascus over the weekend to discuss a humanitarian plan and a truce proposal for Aleppo, but both were rejected by the government.

The humanitarian plan seeks to evacuate the sick and wounded from the east, as well as deliver aid and allow doctors to enter.

The truce plans calls for the departure of militant fighters from the east, but would allow the opposition administration there to remain, at least temporarily.

Syria's Foreign Minister Walid Muallem said on Sunday the truce plan would "reward terrorists", and insisted that the government would recapture the east.

The situation in Aleppo has become such that many analysts see the crushing of the rebel forces as inevitable.

"At this point, operationally, there's very little you can do to avert the fall of Aleppo," said Emile Hokayem, a senior fellow at the International Institute for Strategic Studies.

"You can't send weaponry in any more, all the supply roads are cut, and you won't intervene from the air because of the costs and the risks," he told AFP.

Although there have been expressions of outrage, there has been little sign of intervention from the international community, which has behaved as "a powerless bystander", said Karim Bitar, a researcher at the Institute for International and Strategic Affairs.

Despite opposing Assad's government, the West now appears impotent in the face of its advances.

"There was a time to do something about Aleppo... but now it's too late," added Hokayem.

Meanwhile, a UN aid convoy carrying food, water and other basic supplies on Tuesday was able to cross frontlines in Syria to reach a rebel-held city, the first cross-line delivery this month, the UN spokesman said.

The deliveries, which require complex negotiations to ensure the security of the aid workers, were announced a day after UN aid chief Stephen O'Brien told the Security Council that the humanitarian crisis was worsening in Syria.

O'Brien said there had been no cross-line deliveries in the month of November despite a series of UN resolutions calling for unimpeded access for humanitarian aid.

The food and other assistance will help 107,500 Syrians living in Rastan and nearby villages in the Homs region of western Syria, which has not received any aid since July.

Nearly six million Syrians live in hard-to-reach areas including one million people in besieged areas, according to the United Nations. Syria War
Aleppo siege: Obama 'not optimistic' on Syria as city continues to be pummelled