With Islamic State gaining ground, some analysts say confronting group is a matter of necessity, but others fear creating a new Afghanistan or Iraq 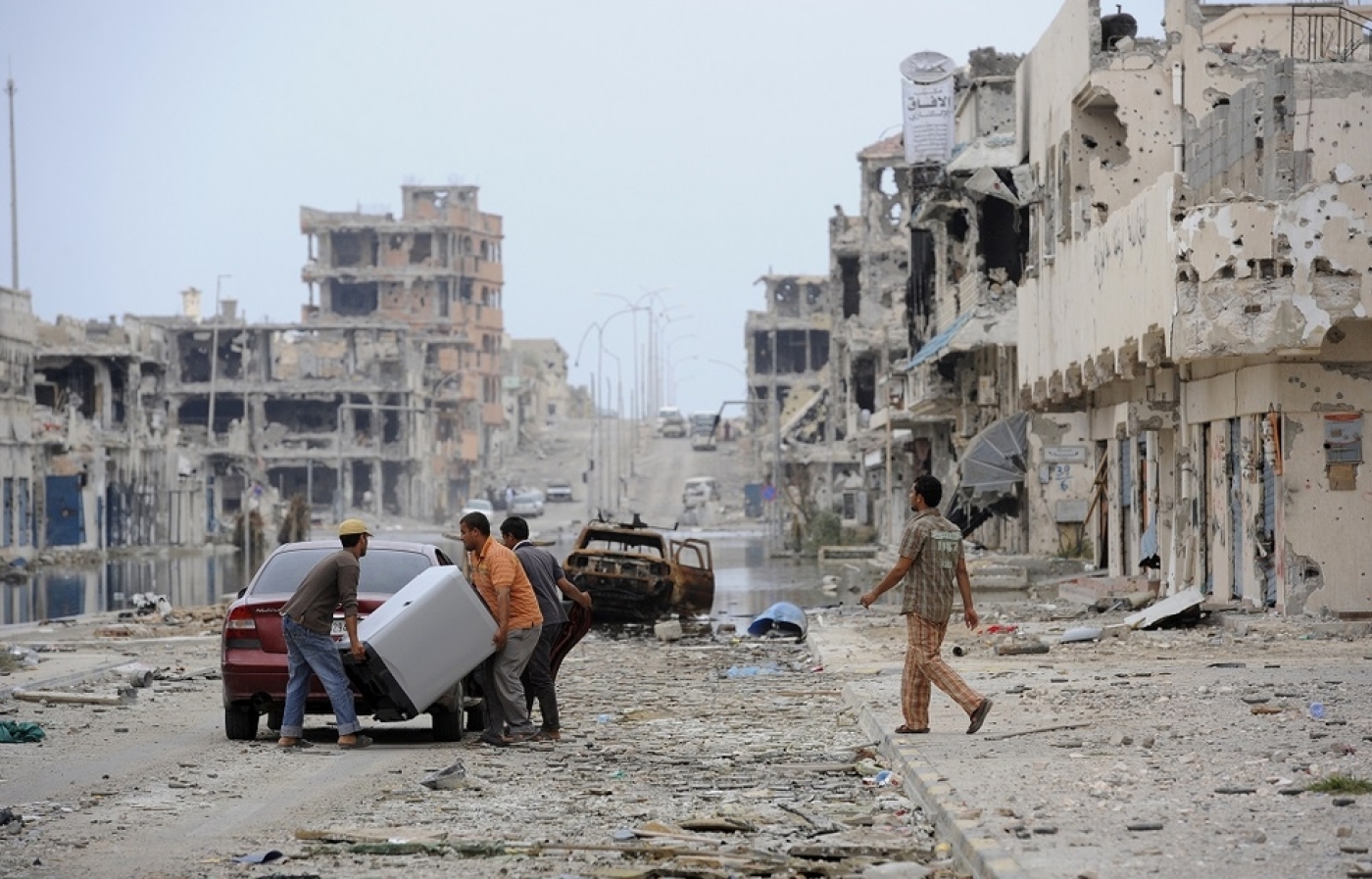 Widespread destruction in Libya, which has seen unrest since 2011, is helping to fuel the rise of IS (AFP)
By
Simona Sikimic

If the Islamic State (IS) group is left to its own devices in Libya, some analysts warn that the group could seize a stretch of the Mediterranean coast and the country’s key oil infrastructure within months.

As the group has proved difficult to defeat in Iraq and Syria, there are fears that the militants will become deeply entrenched in Libya, where they have gone from strength to strength over the past 18 months, sparking serious talk of an intervention.

“The threat imposed by IS in Libya is still gravely underestimated by many,” Wolfgang Pusztai, a freelance security analyst, told Middle East Eye. He warned that, if left unchecked, IS will rule much of the Libyan coastline “no later than late summer 2016”.

“The bottom line [is that] such an intervention to stop the expansion of IS is not a ‘war of choice’ but a matter of necessity,” he said.

Dozens of defence ministers from countries taking part in the US-led anti-Islamic State coalition met in Brussels on Thursday to discuss reinvigorating the drive against the militants. Spurred in part by the advance of IS in Libya, coalition members vowed to redouble their efforts to defeat IS, and NATO said it would look into joining the fight.

This week, the chairman of the US Senate Foreign Relations Committee said the Barack Obama administration was “on the verge of taking action”. Tunisia on Friday said that it was preparing for the influx of more Libyan refugees in the event of an anti-IS intervention.

But for all the talk of bomb dropping and obliteration, the reality of how an intervention in Libya might proceed – and the success it would actually have if it did – is much more complicated.

Some analysts even warn that any intervention would only make things worse.

“The various sides will hoodwink the international community into thinking that they are fighting the Islamic State when in fact they will use this new support to fight each other,” Anas El Gomati, director of the Sadeq Institute, a Libyan think tank, told Middle East Eye.

“The same thing happened in Afghanistan and Iraq and, 10 years on, the social fabric there has been ravaged because localised fighting was accelerated through international co-operation. It’s only adding fuel to the fire, and the same would take place in Libya.”

There are serious impediments against moving intervention talk into action. First, Western politicians say they must be invited by a newly formed Libyan unity government, which was stitched together during UN-backed talks in December but is yet to see the light of day.

In late January, the first unity-government list, complete with 35 names, was rejected by the UN-recognised Tobruk-based parliament.

The presidential council tasked with choosing the new government was then due to submit a more manageable 12-person list on Wednesday but missed the deadline. It is now set to re-submit the list by Sunday. The fate of Tobruk-allied General Khalifa Haftar, who became the commander in chief last year, has been the main sticking point, threatening to derail reconciliation.

Analysts are divided over whether a compromise is possible, but even if a deal is reached within the current timeframe hurdles await.

Mattia Toaldo, a policy fellow at the European Council on Foreign Relations, said it could be many more months before the new government is able to meet in the capital Tripoli and many more months after that before it is in a place to authorise any kind of intervention.

There have been some signs that the West is willing to act without a clear partner on the ground. Abu Nabil, an IS leader in Libya, was killed by a targeted US airstrike in November, and Washington was also forced to admit it had sent in its special forces after footage of its troops was leaked.

The British likewise have been accused of sending in its special forces, the SAS. They have stayed tight lipped on the matter but earlier this week did announce they had been flying RAF missions.

On 7 February, unknown planes reportedly hit IS positions in the coastal city of Derna.

But by and large, Western governments, which say that intervention without unity risks looking like they had sided with one Libyan faction over another, are sticking with the unity government line.

Peter Millett, British ambassador to Libya, said on Monday in London during an event organised by the Legatum Institute that the “plan B was more plan A”.

But can it work?

Even if a unity government did form and invited the West in, it is unclear what kind of intervention would result and whether it would help.

Toaldo said we are much more likely to get an intervention akin to the drone war on al-Qaeda in Yemen than the coalition bombing in Iraq or Syria. Boots on the ground seem out of the question for now, although “a large-scale attack in Europe” could change the equation.

Gomati of the Sadeq Institute, however, believes an intervention of any kind would be a “catastrophe” and would reignite and accelerate the civil war.

For all the grand gestures, he said, there is still too much animosity between Libya’s sparring factions for them to lay down their weapons.

“The two blocks, Operation Dignity and Libya Dawn, are not only competing against one another but also within themselves. It’s a broken coalition that does not necessarily share goals or a national objective, but have instead coalesced for a certain time, for certain reasons, and only against a common enemy, never a common goal.”

Salem El-Maiar, of the Society for Libyan Studies, said that while the threat of militias hijacking the process is an “extreme” option, it is still a “viable one”.

“All the militias are currently re-evaluating their position. Will they be legitimised by the new government or will there be a drive toward law and order, because if this is imposed many of them will be behind bars,” said Maiar.

The key fear is that militias, which dominate the Libyan political landscape, will move in to kill off any political deal or will exploit it to make it unworkable. This would not only scupper chances of getting a serious unity government in the first place, but could also damage the government and the UN-backed deal in the long term. And as long as Libya remains fiercely divided and a security vacuum is allowed to grow, IS will likely continue to expand.

In order to be deemed legitimate, the new government must meet in Tripoli, where the militias hold sway and have previously used violence to win grand concessions and pay-outs from the authorities.

There have been some indications that the militias are willing to play ball. Toaldo believes that in the south and west of the country there is a growing trend toward reconciliation, which has already helped to promote some notable local truces and has helped to soften the militias’ stance.

Italian general Paolo Sera, the senior UN adviser for the stabilisation of Libya, has also said that the majority of militias in Tripoli are happy to accept the new government, although the nature of their cooperation remains unclear.

“The militias have created an industry, and have been doing this since the time of the National Transitional Council in 2011," Maiar said. "If you don’t pay people with guns, you are in trouble."

In late 2012, the then authorities legitimised all the militias and began paying them from national coffers. The ability of the government to keep doing so, at least on the same scale, is now in doubt.

Falling oil prices have compounded earlier financial problems, with the US and key EU allies saying that “Libya faces a budget deficit that has the potential to consume all of its financial assets”.

It is unclear how the militias will react once the payments stop coming.

Libya still has one final card to play. The Libyan Investment Authority is holding onto some $66bn which was frozen by the UN as a temporary measure until a political settlement was found. The announcement of the unity government could pave the way for the cash to be released.

On one level, this could provide Libya with desperately needed funds to kick start its economy and rebuild. But the money could also further fuel infighting, some analysts warn.

Maiar says things are so bad that some Libyans now say they look forward to the coffers running dry, seeing this as the only way to break the militia’s hold on the country.

As long as people continue to see their future as an alternative between bankruptcy or violence, Islamic State will keep growing irrespective of intervention, he said.