ANALYSIS: Chaos at Nasib border crossing into Jordan from Syria 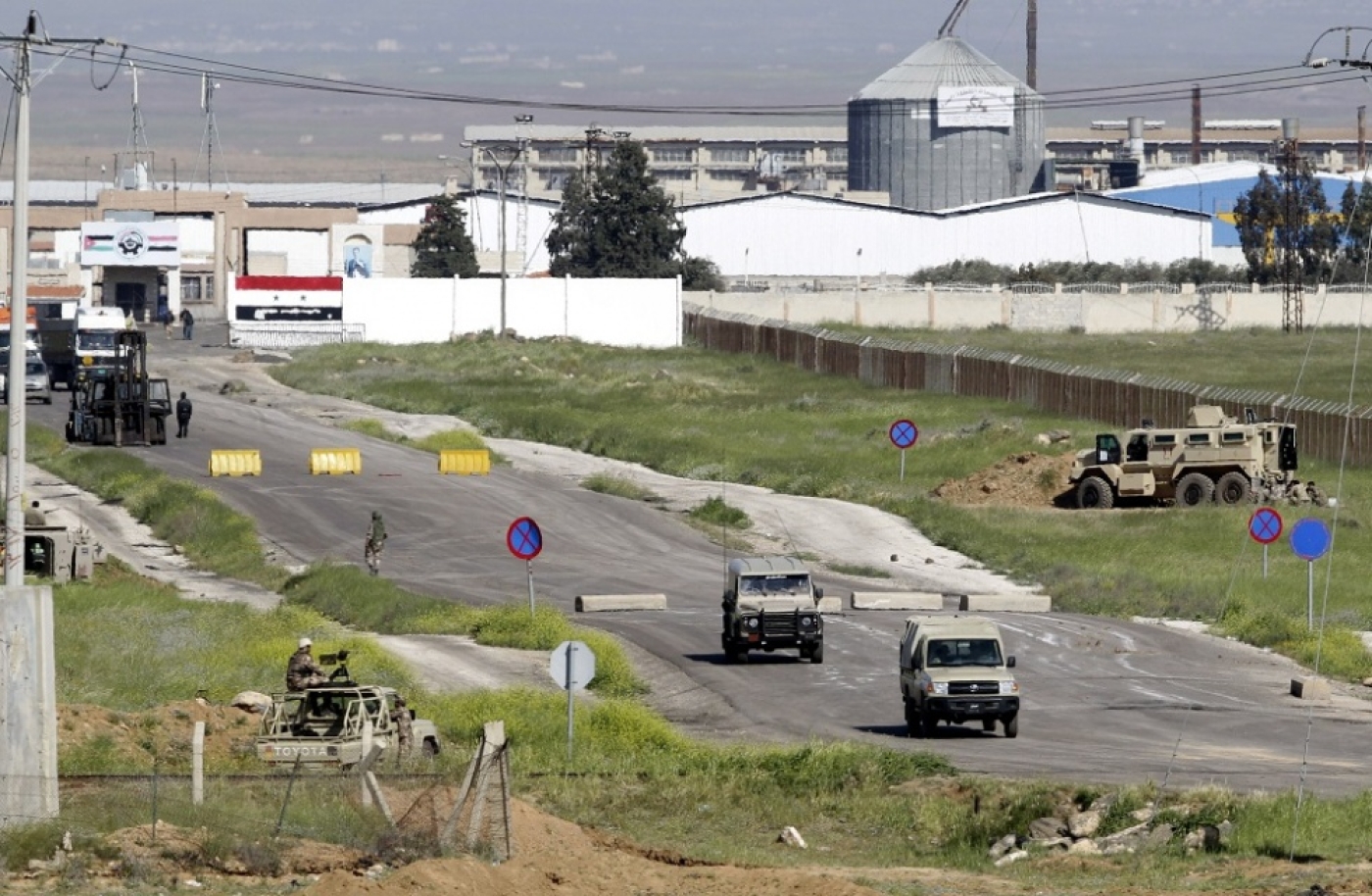 Five days after being snatched by opposition fighters from the Free Syrian Army and al-Qaeda’s affiliated al-Nusra Front, Syria’s last government-held border crossing into Jordan is wracked by chaos and closed to traffic as rebels fight over goods, hostages and access.

The seizure was widely branded as a major victory by the opposition, but it could yet have negative consequences for much-needed trade, as well as the delivery of aid and humanitarian supplies. There has also been widespread debate about the involvement of al-Qaeda’s Syria affiliate the Nusra Front and whether their role in the operation will strengthen their hand along the vast frontier between Syria and Jordan.

Sources on the Syrian and Jordanian sides have confirmed to Middle East Eye that after months of stalling the rebels were finally given the go-ahead by Jordan to take over the crossing, begging the question - is a more fundamental shift at play here than first meets the eye?

The Nasib crossing point was the Syrian government’s last lifeline into Jordan and a crucial supply road for Damascus. A second crossing point, Ramtha, has been controlled by rebels since September 2013. Each day, Nasib admitted Lebanon and Syria-bound lorries loaded with commercial goods from Jordan and the Gulf countries, as well as truckloads of humanitarian aid destined for government-held stretches of Syria.

The rebels who took the crossing point say their aim was to cut off their enemy’s access to Jordan, but the melee they created may ultimately do their cause more harm than a government-held border did.

The operation began the night of Tuesday 31 March when insurgents started shelling Nasib crossing, and on the Jordanian side of the border, officials closed Jaber crossing. For the men firing artillery and cannons at the border, this was a green light. According to Issam al-Rayyes, spokesman for the Free Syrian Army’s Southern Front group, Syrian intelligence staff were the first to abandon their post as the attack intensified. The members of the Syrian Army present on the border quickly followed. By the evening Nasib was in opposition hands, and the road leading from Jordan remained closed.

"As soon as Jordan closed the border Tuesday night, it was a clear message they were OK with this operation. They didn’t have a problem with it,” said al-Rayyes.

According to sources familiar with the situation, rebels have had opportunities to seize this border before but were warned off by Jordan, which has until now sought to keep Nasib in government hands. Jordan has navigated the Syrian conflict and preserved its own security by maintaining diplomatic relations with Damascus even as it has liaised with the opposition to manage the Jordan/Syria border. The shift in the Jordanian position is significant.

During the operation several civilians including women and a number of Lebanese truck drivers were caught up in the melee, and on Friday, Nusra Front militants took 10 of the truckers hostage. All but one has since been released.

There were also reports of mass-scale looting as rebels stormed the crossing point and the customs building and took cars, weapons, ammunition, trade and aid goods.

On Friday, Jordan’s Interior Minister Hussein al-Majali visited the border and the Jordanian-Syrian Free Zone to inspect damage and begin calculating losses. According to Jordan’s state newswire Petra, Majali said the crossing was “temporarily closed” and would remain that way until security was restored. Late Sunday evening a memorandum was issued by the FSA-run Deraa Council Government stating that the crossing would be ready for traffic within 12 hours, but 24 hours later the border was still closed.

The closed crossing point hasn’t just hurt the Syrian government. On Friday, Jordan’s Agriculture Ministry spokesperson warned the Jordan Times newspaper the border closure was “undoubtedly bad news” for farmers and exporters. Before the war, 1,000 tons of fruits and vegetables, worth millions of Jordanian dinars were exported each day to Syria and, through Syria, to Lebanon. Though these figures have dropped in recent years under government control, until last Thursday Nasib would typically admit hundreds of tons of food each day. Traffic has ceased just as Jordanian farmers begin to harvest beans, almonds and melons.

Even if the border is re-opened under a three-starred rebel flag, Lebanon-bound exports are likely to be affected. Lebanese authorities typically require an entry stamp from the Syrian government for goods to be admitted into the country. Any work-around could be challenging and politically sensitive, as the government of Syria still controls the highway from Damascus to the Lebanese border.

Humanitarian staff charged with sending aid into Syria said they were concerned that aid despatched through an opposition-held Nasib crossing might be blocked from entering government-controlled areas. Before 1 April, lorries loaded with tens of millions of dollars in humanitarian aid went through Nasib each month. Those lorries are now idling in Jordan.

Southern Front spokesman al-Rayyes was confident the border would be operational soon. “We have the capability and qualifications to run it again. Under the regime, not everything got into Syria, there were arrests, stealing, humiliations. That won’t happen under the new leadership,” he said.

NGOs are less confident. One aid worker whose remit includes sending aid into Syria told Middle East Eye that it was possible to open a crossing from Jordan into the government-controlled Swaida province in eastern Syria.

“However, this would take some time, leading to an undefined period of constraints in humanitarian access to those populations,” he said.

Although Jordan is reported to be liaising with FSA leaders as regards to the future of the crossing, that group isn’t the only stakeholder.

The Nusra Front still holds one Lebanese hostage, and according to activists maintains a presence close to the border. Though the FSA disputes that Nusra (al-Qaeda's affiliate in Syria) played any meaningful role in the operation, independent monitors say that the group in fact had a lead role, and that their involvement was known even during the planning stages.

According to an NGO security alert provided to MEE: “Information reported on 31 March from Nasib indicated that the Nusra Front was planning an attack on Nasib with the objective of gaining control of the border and customs post.”

The attack is reported to have included engineers and assault troops from Jabhat al-Nusra, with the aim of tunnelling under and blowing up the border post. In a video released by the group on 1 April, the tunnel is mentioned as part of an attack on the border: militants say it took nine months to dig.

Although the tunnel plan was thwarted, photos show Nusra fighters present in those first hours, raising their flag and posing in front of the customs building. They stayed on, taking more photos, goods, and eventually, hostages.

Despite this, FSA supporters and leadership continue to minimise Nusra’s involvement.

“Those guys didn’t join the battle, and when they showed up everyone went crazy and the FSA asked them to leave immediately,” said al-Rayyes, adding that Nusra had been excluded from the battle's spoils, which he said included cars, weapons, ammunition and duty-free cigarettes and alcohol.

Bashar al-Zouabi, the leader of the FSA’s Yarmouk Division, took to Twitter to blame Nusra and its “lack of morality” for looting. But he also told The New York Times some of his own men had participated in looting, and that he was working to return goods to their rightful owners.

The Nusra issue is difficult for the Southern Front. The faction is known to be an effective fighting force, and in Deraa province where the Nasib crossing is located, it has operated alongside more mainstream - or so-called moderate - groups for the better part of a year.

The FSA supporters who admit this collaboration tend to frame it as a hush-hush alliance necessary to defeat a shared enemy, Syrian President Bashar al-Assad. They often point out that in Deraa, Nusra’s rank and file are mainly Syrian and often close kin to FSA rebels – as if to say: "They’re al-Qaeda, but not the really bad al-Qaeda."

But the Southern Front is forbidden by US and Arab backers from collaborating with al-Qaeda. The weapons, funding and orders that come from a Military Operations Command (MOC) in Amman depend on it following this rule - which suggests Nusra’s presence on the border will have to be eliminated, or at least muted, if the crossing is to be re-opened under a rebel flag.

The question of timing

One of the most puzzling questions around the taking of Nasib is why now.

Nusra’s admission that the tunnel took nine months to dig places the plan’s inception as late as mid-2014, around the time when Nusra and the FSA began to make significant gains in Deraa province. In January 2015, rebels were poised to take Nasib, which was almost completely unprotected, but say they halted efforts after Jordan made clear it wanted to keep the post under Syrian government control. Though Jordan maintains an official policy of non-involvement in Syria’s war, diplomatic and security sources confirm this exchange.

But on or just before 1 April, it appears Jordan’s preference changed.

“This whole operation makes no military sense,” an aid worker told MEE, speaking confidentially as she is not authorised to discuss her organisation's cross-border work. “The rebels already had the village of Nasib. I’m surprised Jordan was OK with this, but the whole thing is really weird. Something is up.”

Since February, a Syrian government offensive to reverse rebel gains in Deraa province has seen a surge of Iranian-backed Shiite militias and Hezbollah fighters move towards the Jordanian border from Damascus in the north, the Lebanese border in the west, and Swaida province in the east.

According to activists and independent monitors, the majority of these men are not Syrian, but Iraqi, Iranian, and even some Afghans and Yemeni Houthis. Some insiders point to this surge in foreign Shiite fighters in southern Syria as a factor in the shift at the border. They appear to indicate that for Sunni-majority Jordan, with strong tribal ties to southern Syria, it may have become a case of the devil we know versus the devil we don’t.

Whether and how the border is re-opened is likely to shed light both on Jordan’s priorities and Nusra’s ability to work alongside the FSA. For now, power brokers on both sides of the border are working to free the last hostage, assess losses and damage, secure the area and identify a way forward.