ANALYSIS: Has Lebanon seen the last of the 'You Stink' movement? BEIRUT - The autumn rains have caused rivers of garbage to float around the city of Beirut, emphasising the urgent need for a solution to the crisis that began in July when a key dump near the Lebanese capital closed.

However, despite the urgency, the country does not seem to be any closer to resolving the problem or the institutional impasse. Lebanon has not had a president since May 2014 and its current parliament, in power since 2009, has controversially extended its own term twice, without holding elections. It will now rule until 2017.

While mass protests, which saw their climax on 29 August, appear to have died down, the You Stink movement is still active. On 12 November it posted videos showing their activists blocking the entrance of ministries - including labour, environment, industry, education, interior, finance and social affairs - with rubbish.

The following day, the capital was rocked by a suicide attack in the Southern Beirut suburb of Dahiyeh in which more than 40 people were killed. The incident has been greeted with widespread calls for national unity but activists and commentators suggest the incident is unlikely to eliminate the underlying political tensions.

Despite the upheaval, activists, protestors and their supporters continue to argue that Lebanon’s system is fueling internal rot, and have called for more transparency, vast anti-corruption drives and an overhaul of sectarianism. You Stink showed its concern and sympathy for innocent civilians visiting the bombing site the day after the blasts and lighting candles.

What began as a protests against rubbish disposal quickly spiraled into wider calls for reform with demonstrators chanting slogans such as “all means all," referring to sentiment that all politicians responsible for the current state of affairs and corruption

In public, institutional representatives and party leaders repeatedly stress that they support some reforms and have spoken out against corruption, although few have accepted personal responsibility.

Samir Geagea, leader of the Lebanese Forces (LF) which is part of the 14 March block, told Middle East Eye that “there is no evidence that the LF constituents are holding the party responsible for the current crisis”.

“The LF party is not part of the current government and has not been since 2011, it has not given government its vote of confidence, and has been in the opposition since the end of the civil war in 1990 except for two times. During those two periods no one accused the LF of corruption.”

This line is echoed by many others across the political sphere. On the other side of the political spectrum, Michel Aoun of 8 March party, also a presidential hopeful, defended himself against charges of having backed down from large reform proposals in exchange for the presidential seat.

But protestors have been left unconvinced.

“All those in power now in one way or the other have contributed and are part of that corrupt system. This is what we mean when we say that ‘all means all’. We need democratic elections for the people to decide who they want to represent them,” Assaad Thebian, a You Stink organiser who identified as secular and has come under attack by some for blasphemy, told MEE.

According to Geagea, there is a “lack of trust between the people and the government due to corruption. This is the most significant obstacle” although he argues that once back in the cabinet “the LF party will set new standards in the area of reform and will push other parties to do the same”.

Geagea, like most Lebanese leaders, hails from the time of the country’s bloody civil war that raged from 1975 to 1990. He draws his support from parts of the county’s Maronite community with his supporters reviling the fact that he was imprisoned for 11 years in solitary confinement during the Syrian occupation of Lebanon, and strongly supportive of the party line.

While the Syrians officially withdrew following the 2005 Cedars’ Revolution in Lebanon, which erupted following the killing of Lebanese Prime Minister Rafic Hariri, the debates over Syria influences and polarises public discourse. The issue is never far from the national conscience.

Executive director of press freedom NGO the Samir Kassir foundation, Ayman Mhanna, explains that this backdrop makes it exceedingly difficult to get even simple things done. Critics riled against a recent proposal to have Lebanese waste shipped to Syria because this “would effectively restore political relations between the two governments and benefit one specific alliance block in Lebanon over the other,” Mhanna said.

The two main blocks that were formed after 2005, and the March 14 and March 8 alliances are firmly divided. The first block is strongly anti-Syrian government, while the second is pro-President Bashar al-Assad.

While the country’s political leaders pay lip service to the prospect of reform, most argue that change is frustrated not only by the country’s uniquely complex political system - based ruled by the country’s various sects - but also by the influence of regional powers such as Saudi Arabia, seen as a close March 14 ally, and Iran, seen as a firm backer of the March 8 camp.

“We would like for Lebanon to decide its own fate independently but that is not realistic. We are a small country and the real decisions are taken outside of Lebanon,” Justice Minister Ashraf Rifi told MEE.

Rifi is originally a Sunni from Tripoli and member of the Future movement party, which is part of the March 14 alliance.

According to the Lebanese system, the presidency is to be held by a Christian, while the prime minister must be a Sunni and the parliamentary speaker a Shia. While the post-civil war peace accords envisioned the eventual dissolution of the sectarian system, this has failed to happen with each sect fearful of losing its inbuilt security.

Protestors on the other hand, have built their identity around a rejection of sectarianism that underpins the system.

You Stink’s Thebian told MEE: “In our civic society group we come from different confessional groups but we do not view ourselves according to our affiliation or religion. We are united by the objective of solving the garbage crisis and the institutional impasse in the country.”

While Thebian believes Lebanon may not “see immediate institutional change” he argues that You Stink has “planted the seed”.

He highlighted You Stink's request for parliament to elect an independent president who does not hail from any political party, although this is unlikely to happen.

Instead, presidential hopefuls have tried to present an approach which sees them appealing to two seemingly contradictory constituencies.

Geagea, a political hopeful, said he disagreed with “the definition of an 'independent president’ not [being a] member of any political party”.

“I am a member and president of a political party and I am a presidential candidate. [But] I will surely be that independent president once elected,” he added.

Yet the level of trust between the elite, even those who see themselves as outsiders like Geagea, and the protest movement is extremely low and begs the question, can a compromise solution be found?

You Stink’s Thebian was one of the activists leading the protests in late August when authorities decided to crack down, sending soldiers into the streets and firing tear gas. He says the response was systematically harmful and not merely a deterrent.

“The tear gas was thrown first at the back of the protesters and then in the front, leaving them nowhere to run without suffering consequences of exposure to the substance,” he said.

“The Internal Security Forces (ISF) who were primarily responsible for this are ultimately under the jurisdiction of the minister of interior, Nohad Machnouk. No action perpetrated could have taken place without the order coming from high-ranking officers. To date only six soldiers and two lower-ranking officials have been found responsible.”

The police response shook Lebanon, as protestors, many of whom are middle class students and youths, were beaten up on the streets of the capital. In one day alone, 75 people were injured in the clashes with police.

But Rifi - who headed the ISF from 2005 to 2013 and played a key role in the ISF’s evolution post-occupation - argued that the investigation has to be carried out on an individual basis and that the judiciary must ultimately decide who should be held to account. According to Rifi, the ISF must focus on its main goals of protecting citizens, as well as private and public property. He also says he believes that despite recent events the majority of the Lebanese population continues to respect and support the ISF.

Geagea has taken a similar line. “The government’s duty is to protect private and public property from any riots and civic commotion according to certain rules of engagement,” he said. “The current protests include violent elements that must be investigated regarding their backgrounds and motives. Of course if any security forces broke the rules of engagement they should be held accountable.”

Yet some other institutional representatives hold a different view. Minister Rifi says that the current events are simply another “crisis,” downplaying the significance of the cross-sectarian participation in the protests - although he considers the parliamentary decision to extend its own term as “illegal”.

According to the minister, the civic movement has served the role of catalyst, pushing the government to find a solution to the institutional stalemate the country finds itself in.

But protestors continue to insist that a more radical overhaul is needed. The You Stink movement has spearheaded the requests for change and a number of different ad-hoc groups have formed after it, each one dedicated to a specific issue. For example, one group is called Badna Nhaseb (We Want Accountability).

Going forward, Thebian notes that “it is important that we all rally together to achieve our goals or we will lose strength and impact. However, I am sure that even if we are not going to reap immediate results we have succeeded in planting the seed for the future.”

Inside Lebanon
Plane set for Beirut raises alert in Greece after hijacking suspicions
Inside Lebanon
Kenyan woman facing deportation from Lebanon 'because of her activism for migrant workers'
Inside Lebanon
'We want justice': Beirut blast families still seeking truth two years on 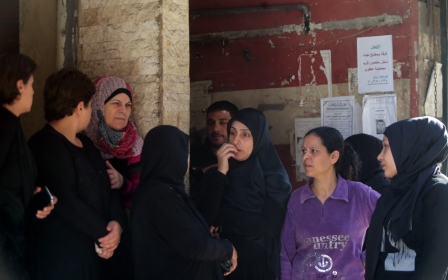