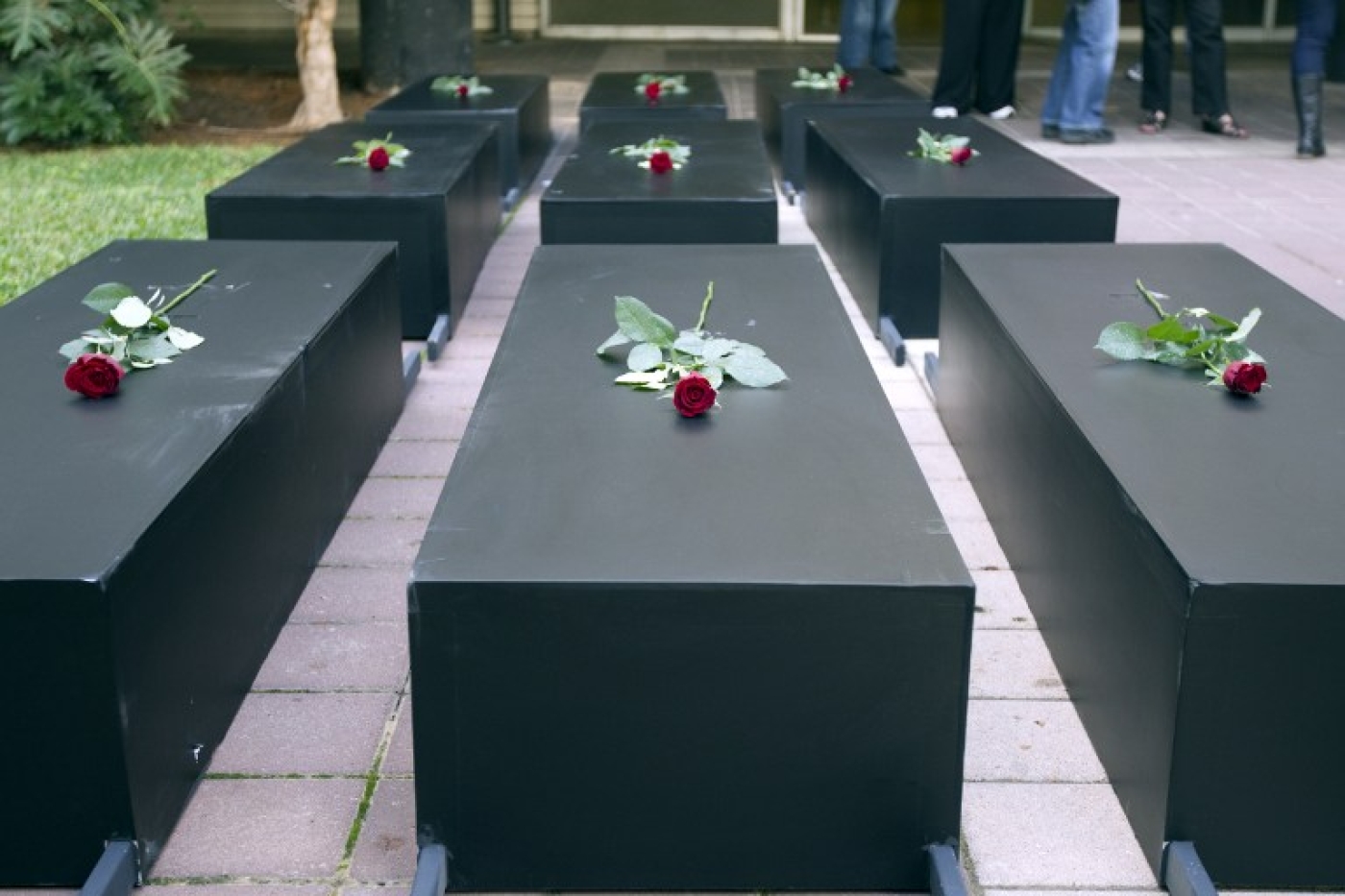 In 2010, a mock funeral in Tel Aviv raised the alarm over the growing number of women killed in incidents of domestic violence (AFP)
By
Dimi Reider

The almost daily ramming and knifing attacks in the occupied West Bank and Israel show no sign of abating. They end almost invariably in the deaths of the alleged assailants, and occasionally in their arrest. The response by active duty soldiers and police is usually lightning quick - if anything, too quick: several of those killed later turn out to be innocent, and the tendency to shoot attackers even after they’ve been stopped has led to accusations of summary executions.

In this light, Minister of Public Security Gilad Erdan's proposed change in the law earlier this month which would permanently allow private security guards to carry weapons home with them from work is perplexing. With no shortage of armed responses to attacks, introducing more firepower in the hands of less professional men seems like a good way to exacerbate, rather than mitigate, the problem.

But Erdan's proposal has also come under intense criticism for another different reason. The critics’ concern is not only that the guards will be too quick on the trigger when a suspected attack occurs, but also that their guns will be turned against their loved ones and themselves at home.

Despite its turbulent history and frequent outbursts of political violence, Israeli gun ownership and gun crimes are few and far between compared to in the US. According to the University of Sydney's Gun Policy, overall licensed and unlicensed gun ownership in Israel stands at a mere of 7.3 percent of the population. In the US, it is a whopping 101.1 percent - meaning that there are more guns than people. Consequently, gun-related deaths in the US amount to 10.3 for every 100,000 people; in Israel, just 2.1.

According to a report by the Association for Civil Rights Israel, private security companies own 43,000 firearms and employ around 34,000 security guards. While there are a handful of companies that only employ elite unit veterans, most security guards have little, if any, combat training, and are provided to clients by small outsourcing companies. In such companies, the pay is low (minimum wage at best) and the social benefits are nil, but the risks are high. Even if guards are mostly on duty to conduct bag searches, there have been several occasions on which they have delayed assailants long enough to bear the brunt attacks, catching a bullet or a blast for the patrons in a cafe or a shopping centre.

The stress, the long hours, the low pay and the absence of a social safety net already put security guards’ households into a high-risk category for domestic violence. But now it is the ready availability of a service weapon that could tip the scale towards catastrophe.

Between 2002 and April 2013, off-duty securty guards killed 31 people. Seventeen of the victims were women, overwhelmingly in settings of domestic violence. Seven men and one woman shot themselves with their company-issued guns in the same period.

A law stipulating that security guards must leave their work-issued handguns at their workplace was passed in 2008, but it was only enforced starting in 2013, five years and 18 casualties too late - and only after a campaign by women activists and civil society organisations, appalled by the frequent use of work-issued handguns in domestic violence. The campaign, called "Gun Free Kitchen Tables" saw women post photographs of their kitchen tables and list the items they contained - with the pointed absence of a firearm.

In July 2013, following the murder of a lawyer and his daughter by a disgruntled former security guard, Minister Erdan's predecessor Yitzhak Aharnovitch signed an order stressing that the 2008 rule had to be enforced. The results were as swift as they were dramatic: 85 percent of security guards began leaving their handguns at work, as instructed. Between January and July 2013, 13 people were killed by weapons licensed to security companies. Between July 2013 and November 2014, not a single one.

But in November 2014, after an attack on a Jerusalem synagogue, Aaronovitch signed an executive order suspending his previous decision, allowing security guards to take their weapons home once again. Although it was to expire after 90 days, it's been regularly renewed ever since - and Erdan is now set to make it permanent, arguing it will help prevent further 'lone-wolf' attacks.

“If you shoot a woman who is standing there petrified, even if she has just stabbed someone, how is that ‘prevention’? And there are cases a lot less clear than this - for example, some argue that a few of the ramming attacks [which normally end with the shooting of the driver] may well have been simple car accidents. The designation of an incident as a terrorist attack is all too often in hindsight, by the IDF and the police. We have no way of independently verifying every incident in which they claim to have stopped a threat.”

In fact, Mazali said, one of the most notorious cases of mistaken identity - the killing of Habtom Zertom, an Eritrean asylum seeker lynched by a mob in Beersheba in the wake of an attack this October - involved a private security guard, who almost certainly delivered the fatal shot.

Only one in every 10 suspected attacks in October involved private guards discharging their firearms, but in these attacks, as many as half of which saw guards shoot people who weren't involved in the attack, the campaigners said. The number of incidents in which guards actually played a role in stopping an attack is thus extremely small - while the risk posed to the guards themselves and to their family members by weapons carried outside work time is tragically consistent.

“Since 2013, when guards were originally banned from taking weapons home, there hasn't been a single domestic violence killing with a work-issued firearm, despite the order's suspension in 2014", said Mazali, noting that the majority of guards still prefer to leave dangerous weapons at work.

“But I've been working on this issue since 2002. And I very quickly learned that so long as weapons are taken home, it's always only a matter of time before the next killing."

The campaign is beginning to rally opposition to Erdan's move, and is considering an appeal to the Supreme Court.