ANALYSIS: Trump hires and fires, and the Gulf 'sideshow' rumbles on

Emiratis hail the sacking of Rex Tillerson. Qataris fear the loss of a vital ally. But analysts say US policy on Gulf rift won't shift under Pompeo 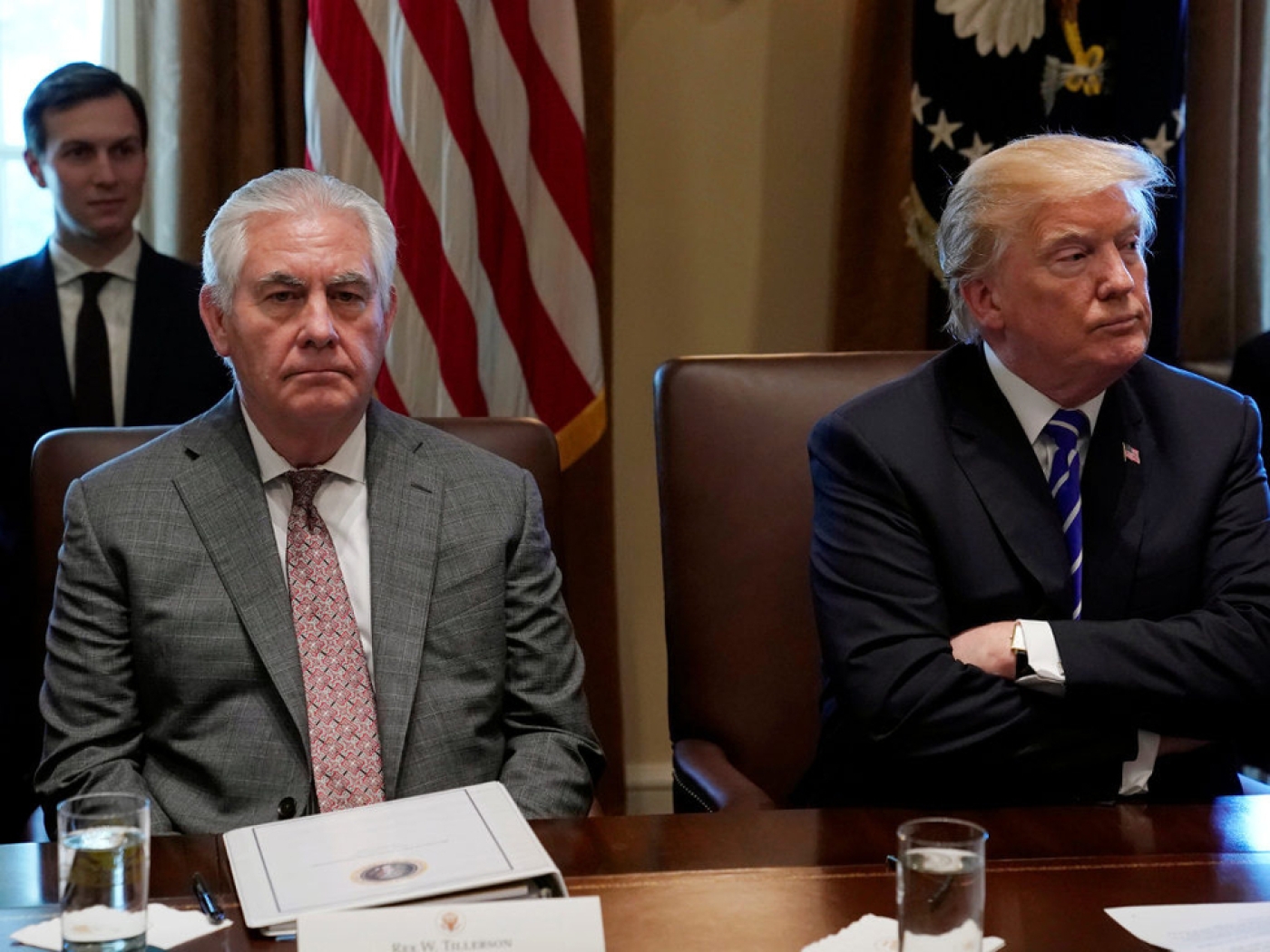 Tillerson, flanked here by Jared Kushner, was perceived as a calming influence on Trump (Reuters)
By
Dania Akkad

Emiratis are publicly celebrating and Qataris are privately mourning, but Donald Trump's sacking of Rex Tillerson is unlikely to shift US policy on the row between Saudi Arabia, the UAE and their regional rival Qatar, according to analysts.

On Tuesday, Trump announced on Twitter he was firing Tillerson, citing the now former secretary of state's wish to stay on course with the "terrible" Iranian nuclear deal as one of the reasons. Others suggested it was about the ongoing Russian collusion inquiry.

But the timing was also noted by Gulf analysts - coming just days after leaked emails showed UAE-backed efforts to get him out for his perceived support for Qatar and wish for mediation.

'In the greater scheme of things, the Gulf crisis is a sideshow. This is about big power politics'

"Everyone thinks Tillerson’s firing is about Russia, and it may be - but I don’t think that’s the full story," tweeted Iyad al-Baghdadi, founder of the Kawaakibi Foundation and fellow at Norwegian think tank Civita.

"This is a master stroke for the UAE & Saudi Arabia - and at a very convenient time."

Some celebrated. "The worst secretary of state ever," tweeted Abdul Khaliq Abdullah, a political science professor at UAE University who is close to the ruling family.

"History will remember that a Gulf country had some role in the expulsion of the foreign minister of a great superpower."

But for all the intrigue, credit-taking and anticipated gloom, analysts say the Gulf rift probably had little to do with Tillerson's departure, and his replacement by CIA director Mike Pompeo will not shift US policy.

"I don’t buy into this nonsense that the Emiratis or even Saudi Arabia have been able to influence the White House decision," said Christopher Davidson, a reader in politics at Durham University. "In the greater scheme of things, the Gulf crisis is a sideshow. This is about big power politics."

However true that may be, Qatar will most likely feel the loss of Tillerson, who as a former Exxon executive had close ties with Doha and had acted as a calming influence on Trump's rhetoric.

It was Tillerson who pushed for diplomatic solutions as the crisis broke out last June, while Trump endorsed and even took credit for being the catalyst.

"So good to see the Saudi Arabia visit with the King and 50 countries already paying off," he said on Twitter after his speech in Riyadh calling for the region to confront terrorism. "All reference was pointing to Qatar."

'US policy is what it is. It’s very rare – there is maybe 3 to 5 percent of it that can be changed because of ideology'

By September, however, Trump was brokering calls between the leaders of Qatar and Saudi Arabia.

"If I were a Qatari, I would be happy to have Tillerson in a position of authority and responsibility and I would be unhappy to see him removed because there is a personal relationship there," said David Des Roches, a former Defence Department and White House official and a professor at the National Defence University.

"If nothing else, you know the guy and you kind of know what he’s into. You speak the same language. He’s a known quantity."

Pompeo, said Des Roches, "is more a Trumpite than Tillerson".

"It’s kind of clear the Trumpites are – I wouldn’t say they caused the standoff – but their role in it was less than conciliatory, at least in the early days."

But US policy, he emphasised, doesn’t hinge on personalities and the State Department is more likely to change Pompeo than the other way around.

"US policy is what it is. It’s very rare – there is maybe 3 to 5 percent of it that can be changed because of ideology. Most of our policy is there because of our interests, our situation, because of the resources we are willing to put into it," Des Roches said.

'Extract as much as possible'

US policy on the Gulf rift for now is to encourage reconciliation, something that Kuwait, acting as the sole go-between between the countries, has attempted for months without success.

Anthony Cordesman, an expert at the Washington-based Centre for Strategic and International Studies and former adviser to Senator John McCain, said: "The US position quite frankly is very clear on this – that we want to see an end to the tension between Qatar, Saudi Arabia and the UAE, that we are not taking sides... that there is a real need to find compromise and solution.

"I don’t think there is anyone in the US at the policy level who doesn’t feel that this quarrel is pointless, self-destructive and helps Iran," he added.

'I don’t think there is anyone in the US at the policy level who doesn’t feel that this quarrel is pointless, self-destructive and helps Iran'

Trump has invited the feuding parties to a summit in Camp David for May, which would be a feat in itself, let alone if a breakthrough could be reached, which is doubtful.

But Davidson is even doubtful that the Americans want to heal the rift, given the economic benefits of Gulf allies pouring money into American deals and PR companies to shore up their sides.

After the US secured letters of intent for $110bn arms deal with Saudi Arabia last May, the State Department last week approved a $467m in military sales to Qatar and the UAE last week.

A Politico investigation last year found that the Qatari government was spending less than $300,000 per month on lobbyists which jumped to $1.4m per month after the crisis. Saudi Arabia spent nearly $250,000 per month with three firms and had also spent $6.2m on one firm alone in 2017.

The summit, Davidson said, "will be very much a game of the US trying to extract as much as possible as it can from both sides of the crisis.

"The US is in a great position," he added. "Gulf nationals should be very, very cautious about the intent of the countries they believe are their allies and protectors."