ANALYSIS: US-Turkey ties on a knife-edge amid Afrin offensive

Turkey-US relations are at their lowest point since 1975, when the US placed Turkey under an arms embargo for invading Cyprus 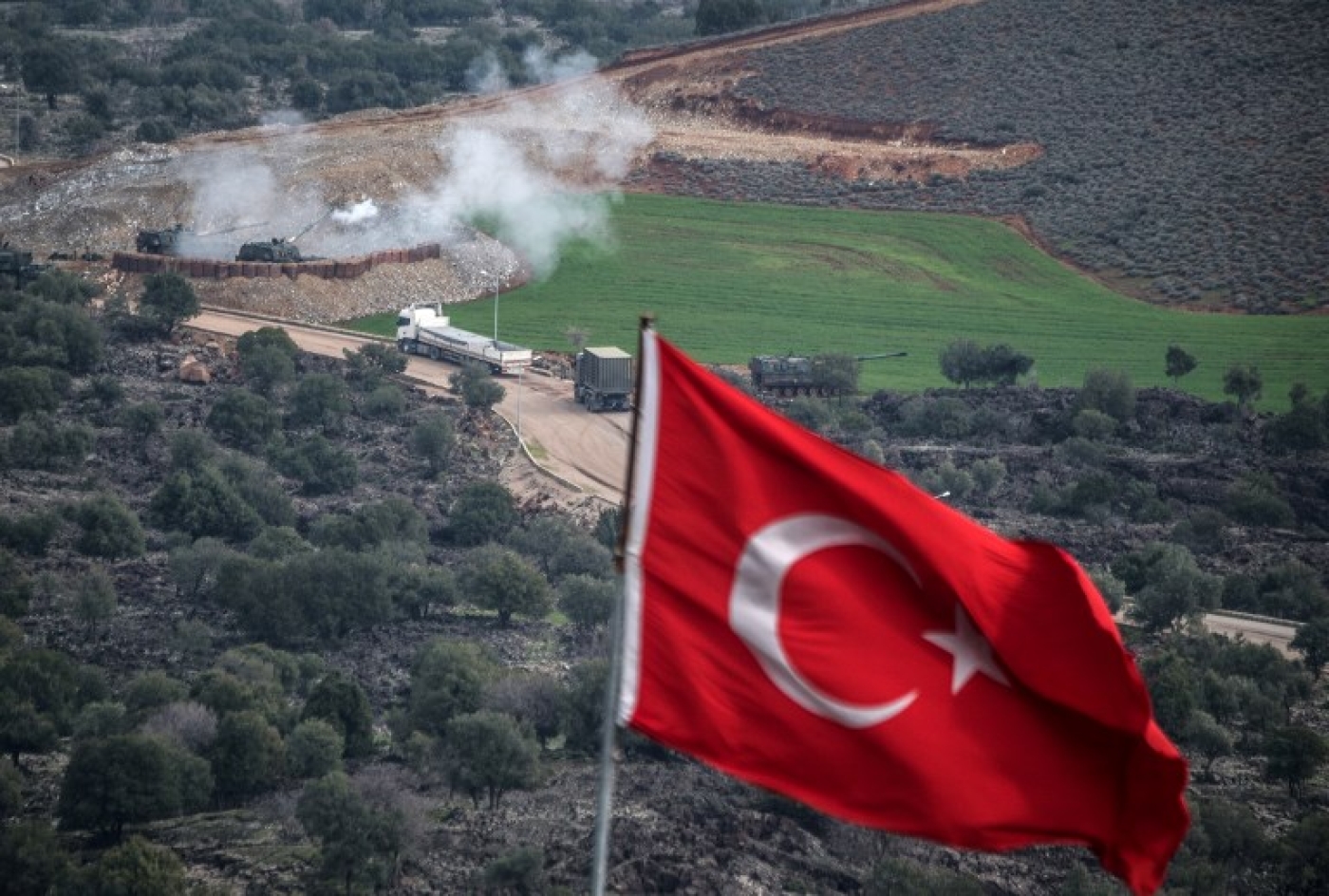 The single death of a US soldier, accidental or deliberate, caused by Turkish troops in northern Syria could potentially cause havoc on a scale that would make Ankara's offensive against Syrian Kurdish groups appear insignificant.

Turkey's military offensive into the north-eastern Syrian province of Afrin has dialled up the tension between Ankara and Washington to the point where the two sides can no longer even agree on the content of a phone conversation between their presidents.

Ankara and Washington have seen ties plunge from one crisis to the next with alarming speed in the past few years, but none has ever had a military dimension with the risk of a direct clash, making this potentially the worst crisis between the two NATO allies since the US arms embargo of 1975.

On 26 January, Turkey's presidential spokesman, Ibrahim Kalin, spoke to US National Security Advisor H R McMaster, and a statement from the Turkish side said they agreed on the need to stay in close coordination to "avoid misunderstandings".

Ankara is targeting the Syrian-Kurdish Democratic Union Party (PYD) and its armed militia, the People's Protection Units (YPG), with which the US claims to have a limited partnership as part of its fight against the Islamic State group. Turkey says the YPG poses a threat to its security.

The PYD controls Afrin along with other areas further east along Turkey's border. Ankara views the PYD as an extension of the Kurdistan Workers' Party (PKK), with which it has been in armed conflict since 1984 and which is listed as a terrorist entity by Turkey, the US and the EU.

A clash with the US is not something Turkey wants, but it is very determined to clear Manbij and the area west of the Euphrates of the YPG presence

The town of Manbij, however, could become the flashpoint where Ankara and Washington clash directly. The US has no known military presence in Afrin.

"Turkey is determined about Manbij after it successfully concludes the Afrin operation, and it knows the risk that brings as far as the United States is concerned. But it is the US that needs to compromise given its failed promises on Manbij," said Oytun Orhan, a researcher at the Ankara-based Centre for Middle Eastern Studies ORSAM.

"Manbij will present an enormous risk in terms of the US and Turkey clashing directly, but both sides will seek a diplomatic solution before it gets to that point. The onus for a diplomatic solution, however, lies with the US. With Afrin, Turkey has shown that it is willing to use its military power to defend its legitimate interests," Orhan told Middle East Eye.

Turkey's Pesident Recep Tayyip Erdogan has sworn from the very first day of the Afrin offensive that Manbij is also in Turkey's military sights. He has even said Turkey will seek to clear the entire strip south of its border all the way to Iraq.

There are an estimated 2,000 US military and intelligence personnel in northern Syria, and many of them are based in Manbij.

Yasin Aktay, a lawmaker from the ruling Justice and Development Party (AKP) and chief adviser to the party, told MEE that Turkey was aware of the risk of clashing with the US but that the risk was minimal.

"A clash with the US is not something Turkey wants, but it is very determined to clear Manbij and the area west of the Euphrates of the YPG presence," said Aktay. “However, recent statements by the US show that it understands Turkey’'s position and agrees with it. So we hope to see Turkish-US cooperation instead of confrontation moving forward."

Turkey's main priority in Syria has shifted from seeking the removal of President Bashar al-Assad to preventing a PYD-controlled corridor that would stretch all the way from the Iraqi border to the Mediterranean Sea.

For Turkey, the Euphrates river marks a significant natural boundary in that regard. It considers territory west of the Euphrates to be majority Arab and accuses the PYD of trying to alter the demographics of the region.

The YPG entered Manbij, which lies west of the Euphrates river, in 2016 as part of the Syrian Democratic Forces (SDF), while clearing the town and area of IS militants. Ankara says US promises to Ankara that the YPG would withdraw east of the river have not been kept.

"There is no more IS in Manbij. The area is 90 percent Arab, so how can anyone allow an ethnically motivated group to proceed with its own agenda and set up its rule there," said Aktay. "Turkey proved to be the most efficient and committed party in tackling IS when it launched operation Euphrates Shield."

The swiftness of the Turkish response to that development showed Ankara's concerns. On 24 August 2016, it launched its first major military incursion, Euphrates Shield, into northern Syria, creating a nearly 2,000 km wide IS-free wedge to prevent what it saw as the PYD's westward expansion under the guise of battling IS.

The brewing crisis between Ankara and Washington as Ankara flexes its military muscle even makes the 1975 US arms embargo on Ankara look insignificant in comparison.

The 1975 arms embargo was imposed after Turkish troops invaded the northern part of Cyprus to prevent the organised mass slaughter of the island's ethnic Turkish population.

The embargo was silently lifted within a few years because having Ankara as an ally was in the US' wider interests. The Cold War rivalry with the Soviet Union and the newly emerged theocratic rule of mullahs in Iran meant Turkey was of paramount geopolitical importance and could not be alienated from the West.

For many Turkish nationalists – both pro and anti-government - the current military operation in Afrin already represents a war between Turkey and the United States.

Some see it as revenge for a series of humiliations imposed by the US, such as the 2003 images from northern Iraq showing US soldiers leading 11 Turkish special forces soldiers away with hoods on their heads and in handcuffs.

The US pays lip service to maintaining the territorial integrity of Syria, just like it did in Iraq.

Others see it as the first phase of resisting the Anglo-American-Israeli Greater Middle East project. The project was first mentioned in the early 2000s and envisages the creation and promotion of "constructive chaos" in the region to further primarily American and Israeli interests.

The project's maps show the Greater Middle East will include a Kurdish state carved out of territory that is parts of Turkey, Iran, Iraq and Syria.

Denied as official US policy, this map was, however, displayed at NATO's military college in Rome in 2006. It prompted a walkout by Turkish officers and a consequent US apology.

US credibility has been eroded to such an extent in Turkish eyes that Turkey's foreign minister, Mevlut Cavusoglu, brushed off a US offer of a security zone on Turkey's border as empty talk.

It remains unclear whether this security zone was offered for the length of Turkey's border with Syria or just for the Afrin region.

The US had failed to back Ankara's calls to both Washington and the UN Security Souncil since 2012 for a safe zone with a no-fly zone along its border with Syria. At the time Turkey wanted that safe zone to house refugees within Syria itself.

Orhan was reluctant to look at US-Turkey ties in Syria through the prism of the Greater Middle East project but said there were parallels between that theory and US actions in Syria and Iraq.

"The US pays lip service to maintaining the territorial integrity of Syria, just like it did in Iraq. It says it is promoting federalism within unified countries. But we saw in Iraq that the federal model eventually led to an independence referendum in the north," said Orhan.

According to Aktay, the problem lies in the lack of US policies rather than any policy based on concepts such as the Greater Middle East project and other similar theories.

"The Americans said their aim was democratisation when they invaded Iraq in 2003 and Afghanistan before that. The last thing they have brought anywhere they have interfered is democratisation," he said. "The problem with American moves is a lack of policy in all its actions in the region."

Orhan said the US was determined to remain in Syria and continue to wield influence even after the military phase against IS, and it was seeking to do so by incorporating the PYD permanently in any political solution.

He also said the Pentagon was the prime determiner of US policy on Syria and it was willing to ignore Turkey and prioritise its relationship with the YPG.

"It is clear that US policy on Syria is determined by the Pentagon and Centcom. It is also clear that they prefer to work with the YPG and further whatever plans they have in Syria at the expense of their relationship with Turkey.” Centcom, or US Central Command, is responsible for the US military presence in an area that includes the Middle East.