Anger over security as Iraqis mourn 200 dead in Baghdad bombing 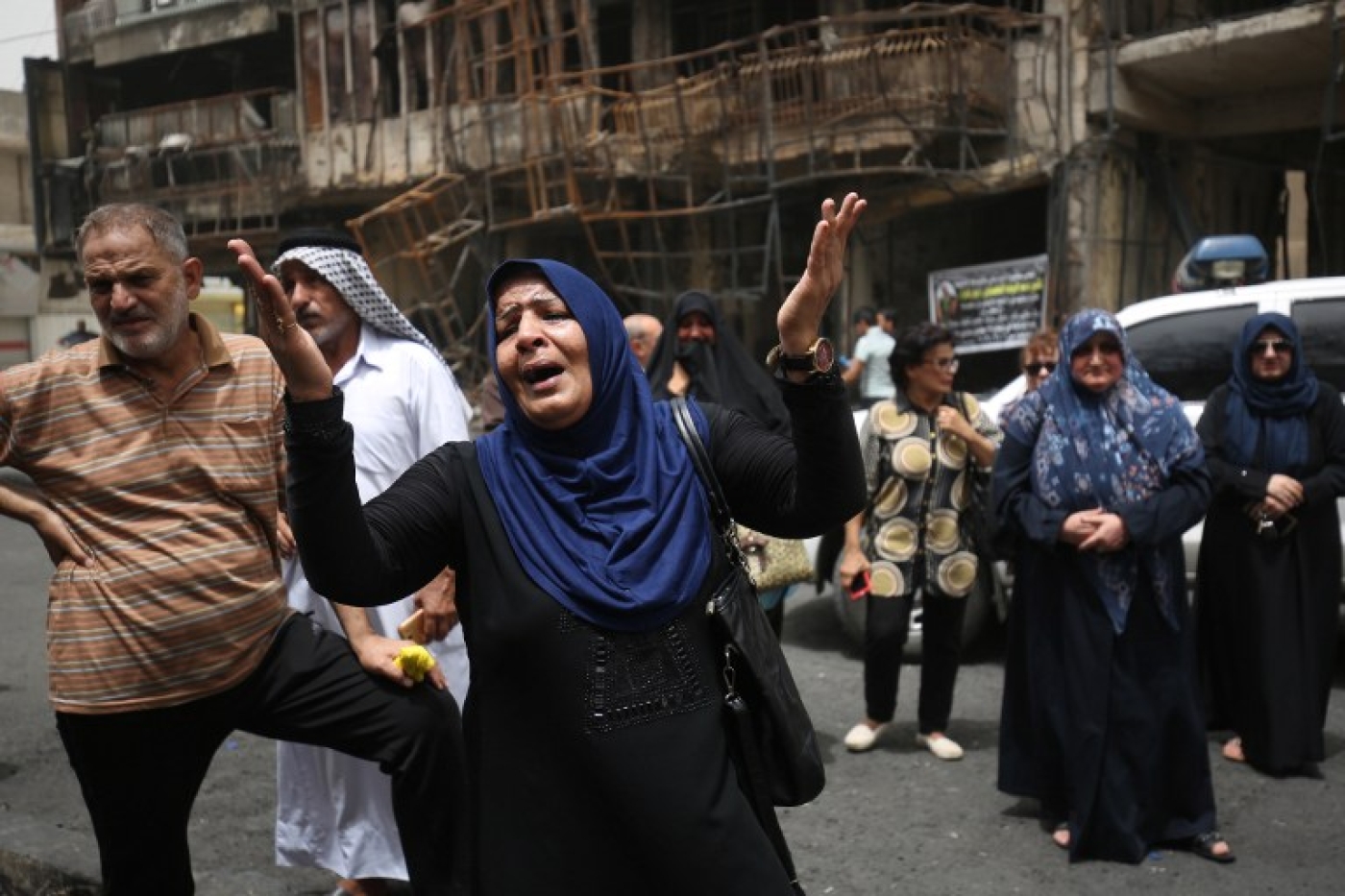 In Baghdad's Karrada neighbourhood, the site of the suicide bombing on Sunday (AFP)
By
MEE and agencies

Iraqis on Monday mourned the more than 200 people killed by an Islamic State (IS) group-claimed suicide car bombing in Baghdad that was among the deadliest ever attacks in the country.

Baghdad, apparently seeking to shore up its image after one of the deadliest ever bombings in Iraq, announced the execution of five convicts and also said it had arrested 40 militants. The justice ministry said it wanted bereaved families to know "that their brothers in the justice ministry are continuing to deliver just punishment to those whose hands are stained with the blood of Iraqis".

The blast hit the capital's Karrada district early on Sunday as the area was packed with shoppers ahead of this week's Eid holiday marking the end of the Muslim fasting month of Ramadan.

Emergency personnel and family and friends of the victims were still searching on Monday for those missing following the explosion, which sparked infernos in several surrounding buildings.

At least 213 people are confirmed dead and more than 200 wounded so far, but a member of the civil defence forces said it would take days to recover the bodies of the victims.

Hussein Ali, a 24-year-old former soldier, said six workers at his family's shop were killed, their bodies so badly burned they could not be identified.

"I will return to the battlefront. At least there, I know the enemy so I can fight him. But here, I don't know who I'm fighting," he told the AFP news agency.

The attack came a week after the country's forces recaptured Fallujah from IS, hailed as a major turning point in the country's battle against the militant group and leaving Mosul as the only Iraqi city under IS control.

But the fresh strike has sparked anger among Iraqis at the government's inability to keep them safe, and prompted Prime Minister Haider al-Abadi to announce efforts to address longstanding flaws in Baghdad security measures.

They included banning fake bomb detectors still in use years after the British man who sold them to Iraq was jailed for fraud in the UK.

Abadi also ordered the deployment of scanning devices at entrances to Baghdad to be sped up, directed that security personnel be banned from using mobile phones at checkpoints, and called for increased aerial reconnaissance and coordination among security forces.

Abadi's office announced three days of national mourning for the victims of the attack and he vowed to "punish" the perpetrators of the blast.

But in a video recorded on Sunday in Karrada, protesters - apparently angry at the government's failure to prevent the attack in their neighbourhood - threw buckets and yelled at Abadi's convoy.

One woman, who gave her name as Umm Alaa, and who lost her apartment in the attack, told AFP: "I swear to God, the government is a failure."

IS "tactics are changing. Why does the Iraqi government have fixed tactics?" a man said at the site of the bombing, criticising the government's "stupid checkpoints" and use of fake bomb detectors.

The website of Iraq's Interior Ministry was also hacked after the bombing, with photos of a bloodied baby and a fake bomb detector. "I don't know how you sleep at night," the website read, according to the Sydney Morning Herald.

In comments on Monday, the premier attempted to strike a conciliatory tone.

"I understand the emotional feelings and actions that occurred in a moment of sadness and anger," Abadi said in a statement.

IS issued a statement claiming responsibility for the suicide bombing, saying it was carried out by an Iraqi as part of "ongoing security operations".

The group said the blast targeted Iraq's Shia Muslim majority, whom the Sunni militants consider heretics and frequently attack in Baghdad and elsewhere.

Karrada is a Shia majority but mixed neighbourhood in the heart of Baghdad, directly across the Tigris River from the Green Zone government district. UN Iraq envoy Jan Kubis condemned the "cowardly and heinous act of unparalleled proportions," calling on authorities to bring those responsible to justice.

Officials said another explosion in the Shaab area of northern Baghdad killed at least one person and wounded four on Sunday, but the cause of the blast was disputed.

Bombings in the capital have decreased since IS overran large areas north and west of Baghdad in June 2014, with the militants apparently more concerned with operations elsewhere.

But the group has struck back at times against Iraqi civilians after suffering military setbacks, and in May, Baghdad was rocked by a series of blasts that killed more than 150 people in seven days.