Recep Tayyip Erdogan says US is supporting a terrorist organisation in the PYD, which Turkey says is linked to the PKK group Tensions between NATO allies Turkey and the US were highlighted this week when the Turkish president criticised Washington for its military support for the Kurdish Democratic Union Party (PYD) in Syria because of its links to the Kurdistan Workers’ Party (PKK).

"You can't say that the PKK is a terrorist organisation and the PYD is not," said Recep Tayyip Erdogan, referring to the US and Turkish designation of the PKK as "terrorist," during a visit to Chile on Tuesday.

Erdogan added that Washington's stance on the PYD, whose armed wing has fought the Islamic State (IS) in northern Syria, was "insincere" and that a clear-cut stance should be taken in fighting all “kinds of terrorism”.

"Whether the PYD, PKK, IS or DHKP-C, our stance is the same against all terrorist organisations," Erdogan said.

The comments followed disagreements over US support for the PYD in Syria during the visit of US Vice President Joe Biden to Turkey in January.

Washington does not consider the PYD a terrorist organisation.

The US government had long debated whether it should provide the YPG, the military wing of the PYD, with heavy weapons as part of the fight against IS in Syria.

According to Turkish media reports, the US dropped 50 tonnes of ammunition to PYD and its allies last year.

At the time, US State Department Spokesperson John Kirby said: “The United States will continue its support for groups that are proving effective against ISIL in Syria."

The US has supported the PYD on the grounds that it has been one of the most effective forces in the fight against IS, with the group capturing many territories – namely Kobane - from the militant organisation over the last year.

During Biden’s visit to Istanbul last month, Erdogan and his Prime Minister Ahmet Davutoglu reportedly told the US diplomat that the YPG was a threat to Turkish national security.

In a statement released after the visit, the Turkish presidency reiterated Ankara’s stance: “The PKK-affiliated PYD and its armed YPG are also considered terrorist groups by Turkey.”

In a similar statement, Davutoglu went on to say: “Turkey sees the Syrian regime, IS and the YPG as threats.”

"We would not like to see IS or the PKK or regime forces on our border. The YPG is a wing of the PKK and it openly receives support from the PKK." 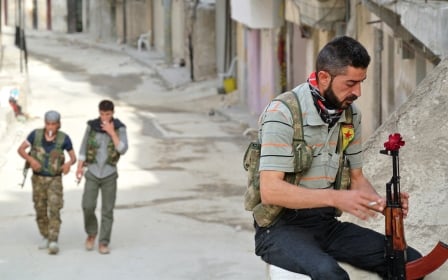