The Iraqi military says IS will be targeted 'wherever possible' in the ongoing battle, but did not confirm who was behind the mosque strike 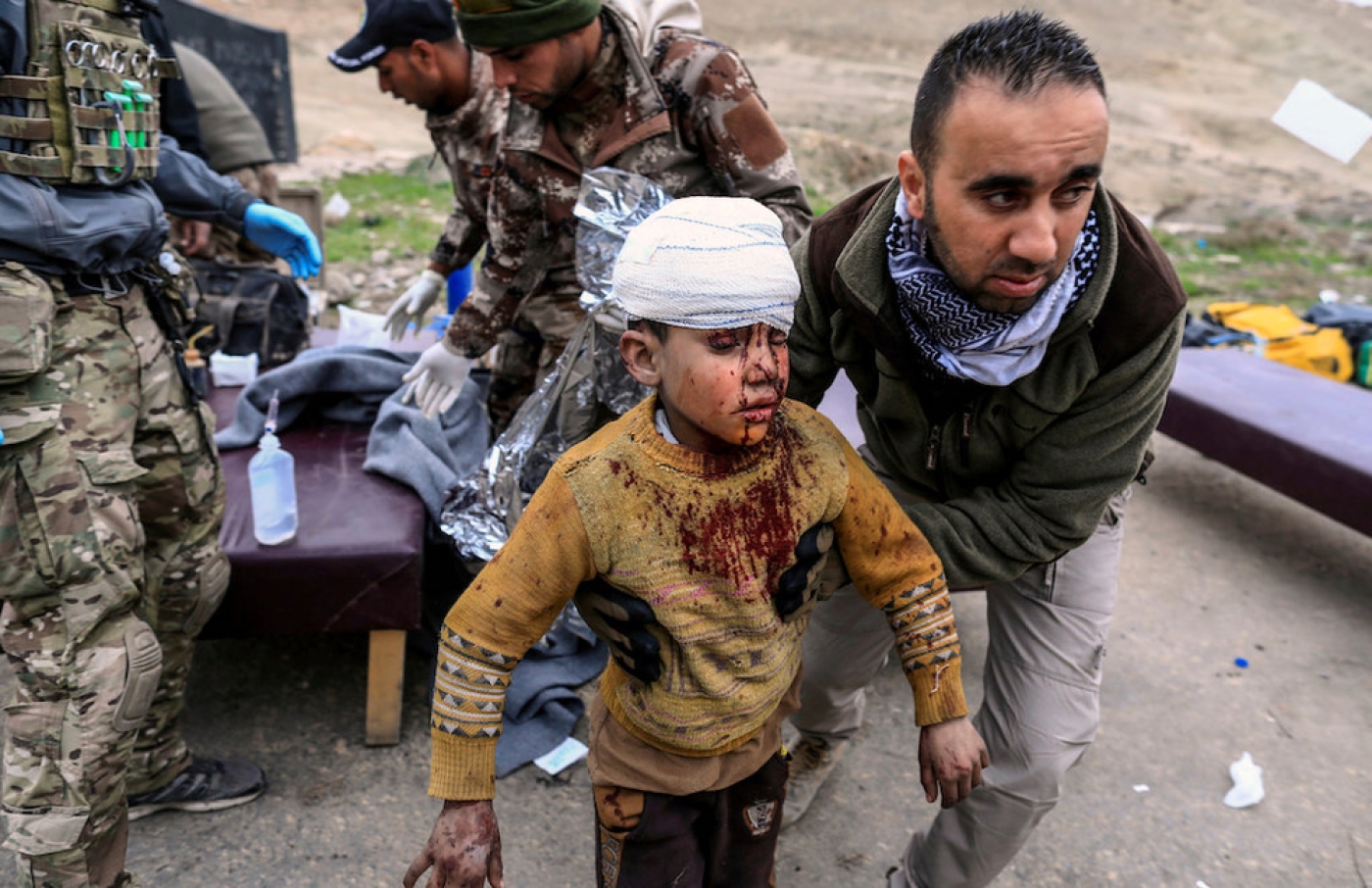 A boy injured in a mortar attack walks toward a ambulance after being treated by medics in a field clinic as Iraqi forces battle with Islamic State militants, in western Mosul (Reuters)
By
MEE and agencies

A number of civilians and Islamic State members were killed in an attack that hit a mosque run by the militants and damaged neighbouring houses in the west of Mosul on Wednesday, three residents said on Thursday.

The Omar al-Aswad mosque, in the al-Faruq district of the old city centre, was hit by an air strike, three residents in the same area told Reuters by phone.

Neighbouring houses were damaged or collapsed because of the blast, they said without giving a precise estimate of the casualties as their moves are restricted by the militants.

The spokesman for the US-led coalition said he wasn't aware of a strike targeting the mosque.

Iraqi military media officers said the battle was ongoing and troops were targeting Islamic State (IS) wherever they could, but did not say this specific mosque was targeted.

Iraqi forces advancing in IS group's stronghold in western Mosul also fought off a counter-attack by the militants during bad weather in the early hours of Thursday, officers said.

Some militants were able to get near elite Iraqi units in the southwestern part of the city, hidden among people displaced by the fighting, a senior officer told Reuters.

When IS took over Mosul in 2014, it ordered Iraqi police and armed forces members who remained in the city to go to the same mosque. They had to surrender their weapons and register in the group's data base, in return for a mandatory pass to prevent their arrest and execution at the militants' check points.

Iraqi forces captured the eastern side of Mosul in January after 100 days of fighting and launched their attack on the districts that lie west of the Tigris river on 19 February.

If they defeat IS in Mosul, that would crush the Iraq wing of the caliphate declared by the group's leader, Abu Bakr al-Baghdadi, in 2014 from the city's grand old Nuri mosque.

The Nuri mosque is located in the same area as the Omar al-Aswad mosque. The Iraqi army on Wednesday shut the last main exit out of Mosul, controlling access to the city from the north west.

Closing the western route further traps the 50,000 civilians estimated to be living in Mosul's western areas.

According to Iraq's ministry of displacement and migration, only 16,000 of those have managed to escape since the battle for west Mosul began.

"There is serious concern for the 750,000 trapped in the densely populated western sector, with conditions worsening daily, according to reports from those who have managed to escape," Hala Jaber of the International Organisation for Migration said in a statement.

Those still in Mosul have to face IS's strict rule along with a lack of basic goods and the danger from the fighting.

"Women had to cover up, you couldn't walk in the street without a guardian. The rules were very harsh and food was very expensive - we could only afford to eat rice and bread," Baidaa, an 18-year-old with two children who had just fled from Mosul, said.

"They trapped us and they didn't want us to leave," she said of the militants.

Her two children did not "understand what's happening, they just followed us. They were so afraid of the firing from the fighting."

Fawzia Mohammed, a mother of 16 who also fled on Tuesday, said she and her family were trapped in their homes with little to eat.

"The last days were terrible. We were trapped inside by the fighting, we had no food," she said.

"The women were forced (by IS) to cover their faces, or stay at home. But that was okay - the worst was the violence, lashings, executions, cutting people," Mohammed said.