Beirut blasts: Why now and what’s next?

The Islamic State has now claimed responsibility for the deadly blasts that rocked a Hezbollah stronghold in Beirut, killing at least 43 Beirut's southern suburbs, deemed a Hezbollah strong-hold, have been hit by a deadly blast (AFP)
By
Nico Lupo Sonnabend and Martin Armstrong

Beirut was left reeling on Thursday after two suicide blasts ripped through the Burj al-Barajneh neighbourhood in Beirut’s southern suburbs.

At least 43 people have been killed and more than 200 injured, the Health Ministry said although the figures could yet rise further.

The attack, which has been claimed by the Islamic State group, was the deadliest to hit Lebanon's capital since the end of the civil war 25 years ago and comes after a period of relative calm. The last incident in Beirut happened last June when a suicide bomber blew himself up after police attempted to raid his Beirut hotel.

But how and why has violence resurfaced now? Are we about to see a resurgence of the tensions seen more than a year ago when Lebanon was feared to be teetering on the edge? MEE spoke to a host of experts to get their take on today’s crisis.

Aaram Nerguizian, a senior fellow at the Centre for Strategic and International Studies in Washington

"The Lebanese security services – including the LAF [Lebanese Armed Forces], ISF [Internal Security Forces] and the GSD [General Security Department] – have all upgraded their intelligence collection capabilities over the 2011-2015 period. Meanwhile, Hezbollah also maintains tremendous situational awareness in its areas of support. However, any contingency plan for security in South Beirut was always likely to be complicated, if not compromised, by the reality that Lebanese national security actors continue to face challenges in operating in areas they simply do not ‘own’ institutionally.

"Second, while internal security operations are still critical to the LAF’s current national security priorities, the primacy of frontier defence in the east, the need to be nationally deployed across every district, and an appropriate aversion to constabulary operations – something that should be led by the ISF and GSD – represent very real resource constraints.

"Lastly, it only takes one successful terrorist operation to significantly undermine the numerous and significant counter-terrorism successes of Lebanese national security actors – including the LAF. Such is the reality that optics shape reality. However, I am not comfortable speculating on agency or who carried out the attacks, even if we have strong initial assumptions."

Phillip Smyth, researcher at University of Maryland, specialising in Hezbollah and Shia militias

“In terms of context, there are a few issues. Sunni rebel and jihadist groups have attempted to strike at Hezbollah because of its support for the [Syrian President Bashar al] Assad regime and direct intervention in the Syrian Civil War. Following the 2013-2014 wave of bombings, which went after Iranian targets and zones under general Hezbollah control, Hezbollah stepped up their security in areas they have presences. This reportedly hindered a number of attacks. Nevertheless, given the drastic and rather publicised uptick in Hezbollah, Iranian, and other Iranian-backed foreign Shia fighters in Syria, and their offensives stretching from Idlib to Aleppo, finding a way to strike at Hezbollah on their ‘home turf’ has been a key desire by many elements combating the group.”

Sami Nader, an economics and politics professor at St Joseph University in Beirut

"This is clearly spill over from Syria. I think it is a direct reply to what happened earlier this week in Aleppo at the Kweris airbase where the [IS-held] airport fell into the hands of the Syrian regime… It shows a dynamic of you hit us on our turf, we will hit you on yours.

“This is not the first round of spill over. We had similar incidents that stopped a year and a half ago. When we had bombings in Dahiyeh, Tripoli, and elsewhere in Beirut that cycle of violence ended after a regional compromise. This included [Prince] Bandar being demoted [from being Saudi intelligence chief] and a safety net being put in place to ensure Lebanon remained neutral. This saw the formation of a government, dialogue between Hezbollah and the Future Movement in Lebanon, but now we are seeing that this safety net is not working – there is the presidential vacuum, Hezbollah and Future are not talking, and regionally we have a new actor in ISIS that did not wield such influence when the first round of violence in Lebanon arose.”

"The Sunni-Shia tensions - especially in Yemen and Syria - have opened up Lebanon to these security breaches. The Lebanese state is unable to answer these challenges as both the parliament and the cabinet are in limbo. The previous success to quell terrorism two years ago was made possible through internal cohesiveness which thus far remains elusive."

“The bomb attacks happened in the aftermath of the crash of the Russian airliner in Egypt. While it is not necessarily the same terrorist group that is responsible for both [although IS has claimed both incidents], we are beginning to witness a trend of opportunistic revenge attacks on allies of the Syrian regime. This means that we can expect to see more attacks of this kind in the near future as groups opposed to Bashar al-Assad seek to counter attempts by his allies at bolstering the Syrian regime.” 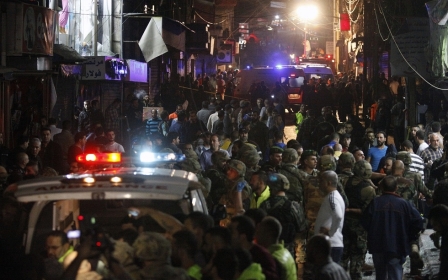