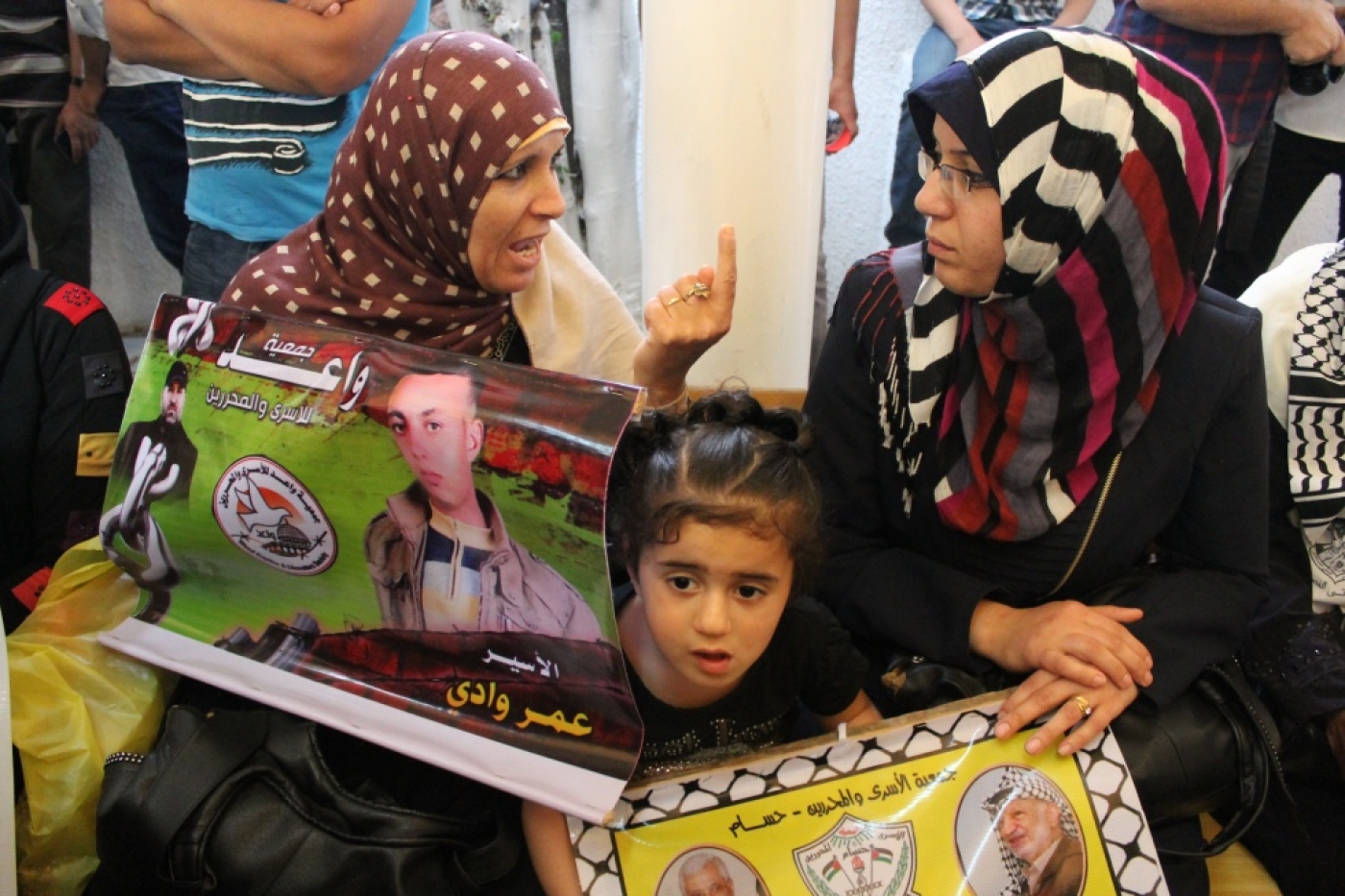 Women with signs depicting Fatah and Hamas prisoners speak during a weekly sit-in by prisoners' relatives and supporters in the International Committee of the Red Cross' Gaza office. (MEE/Joe Catron)
By
Joe Catron

As a mass hunger strike by Palestinian prisoners held in several different jails enters its third week, the recent reconciliation agreement between the Fatah and Hamas movements has bolstered their resolve, say those in contact with the prisoners and their families.

Around 100 prisoners, held under Israel’s administrative detention law, have been on hunger strike, drinking only water, since 24 April to protest their indefinite confinement in prisons without charge or trial and press for their release.

On Wednesday, the Palestinian Authority's ministry of prisoners' affairs announced that 5,100 additional prisoners held in Israeli jails plan to participate in the strike for a day with 50 more joining the strike permanently. Their participation comes despite reports from a local NGO that the Israeli Prison Service has denied salt to the strikers and also raided and beaten those involved.

Under the law, Israeli military commanders can order the detention of West Bank Palestinians for terms up to six months, which can be renewed indefinitely.

News of the truce between Fatah and Hamas has not only heartened the prisoners, say supporters, but reciprocally, the cause of the prisoners over the years has long been a cause that has brought Palestinians together, even when the leading parties clashed – and especially now.

"The conflict between these two movements, Fatah and Hamas, divided them in political and social life," Isra Almodalal, a spokeswoman for the Hamas-led Gaza government, said this week. "But the prisoners are a Palestinian issue."

"They are the most important element of the Palestinian cause, on which all of us are one hand," she continued. "When we talk about the prisoners, it requires all of us to stand together."

‘Flags of all factions’

Hamas leader Mousa Abu Marzouk, who entered the Gaza Strip from Egypt on 21 April for the reconciliation talks, addressed a rally on Monday held by the Fatah and Hamas movements to support the prisoners outside the International Committee of the Red Cross office in Gaza City.

Since 1995, the office has been the site of weekly sit-ins by relatives and supporters and, since the division between Fatah and Hamas in 2007, has been one of few gathering sites in Gaza where members of contending parties routinely interacted.

At Monday’s rally, young men in green Hamas caps pressed toward the stage alongside those wearing Fatah's, patterned after the Palestinian flag and the checkered keffiyeh, or Palestinian national scarf, as green and yellow flags flickered in the breeze.

The event followed marches and rallies by the two movements in Nablus on Sunday, and in Gaza and Hebron last week.

At these demonstrations, "they raised the flags of all the factions. This is unprecedented,” said Osama al-Wuhaidi, a spokesman for the Hussam Association, a Fatah-affiliated prisoners’ society and family support group in Gaza.

Al-Wuhaidi was once a prisoner himself. At the age of 17, he was captured by Israeli soldiers in 1990, at the height of the first Intifada, and held for 15 months on charges of graffiti and stone-throwing.

"The reconciliation united the prisoners," al-Wuhaidi said. "It provided maybe 70 percent of the incentive for them to start this battle. Most administrative detainees, from all the the factions, are participating in the strike. There are no divisions."

"The prisoners thought, and are still thinking, that Palestinians will be united behind them," he said.

Israel currently holds 183 Palestinians under its administrative detention law, the Addameer Prisoner Support and Human Rights Association says. The use of the measure has drawn sharp criticism from international human rights organizations, as well as Palestinian bodies.

"For decades, Amnesty International has urged Israel to end the practice of administrative detention and to release detainees or charge them with an internationally recognizable criminal offence and try them according to international standards," Ann Harrison, Amnesty's deputy director for the Middle East and North Africa, said in 2012.

"It is outrageous that Israel has locked these men up for months without either charging them with crimes or allowing them to see the evidence it says it has against them," Sarah Leah Whitson, Middle East director at Human Rights Watch, said last year.

"Israel's regular use of administrative detention, at the least, inverts international law and turns the exception into the norm, at the cost of the fundamental right to due process," she added.

Since 2012, several administrative detainees have successfully pressured Israel to release them through individual or group hunger strikes.

Israel has used its similar unlawful combatants law to detain residents of the Gaza Strip, most recently Palestine national football team player Mahmoud Sarsak, whom it freed in 2012 after his own strike.

While a comparable emergency powers law theoretically extends to Israeli citizens, only one - Khaled Daoud, a Palestinian with an Israeli passport – is held under it.

"This is an apartheid system," Almodalal, the Gaza government spokeswoman, said.

Many of the administrative detainees are political leaders and other prominent figures in their communities, al-Wuhaidi said. For example, nine members of the Palestinian Legislative Council, the elected parliament of the West Bank and Gaza Strip, are currently detained.

"As recently as 2009, nearly a third of all Palestinian legislators were held in Israeli detention, preventing the PLC from reconvening since mid-2007," Addameer said on 1 April.

One of the Palestinian legal defense and advocacy group's own staff has also fallen afoul of the administrative detention law. On 21 October 2013, Samer al-Arbin, an Addameer accountant, received a four-month order after his arrest three weeks earlier. It came on the heels of a series of arrests, raids and travel bans against the organization, its officers and employees.

"The Israeli military's apparent persecution of a prisoners' rights group, especially without allowing the individuals to defend themselves, is a prime example of the injustices the group seeks to counter," Joe Stork, Human Rights Watch's deputy Middle East director, said the following week. "The military should stop harassing Addameer's employees on the basis of vague or secret evidence."

Ahmad Rimawi, a student, was detained by Israeli soldiers at a checkpoint on 17 November 2012, five days after his eighteenth birthday. Now nineteen and on his third administrative detention order – based "only a speculation of his alleged 'offenses,' without providing any evidence against him," Addameer said – he is the youngest administrative detainee on hunger strike.

In recent days, the Israeli Prison Service has placed 51 administrative detainees hunger-striking at its Negev Prison in solidarity confinement, while 37 in Ofer Prison were transferred into solitary confinement at Ramle Prison, according to the Palestinian Prisoners' Society. The group also said many had been denied legal and family visits.

Al-Wuhaidi speculated that these measures were intended to prevent hunger-strikers from learning of outside support, as well as to discourage the spread of the strike. Regardless, the number of participants has grown since the strike began 15 days ago. On 1 May, 26 new administrative detainees joined it, the Palestinian Prisoners' Society said.

On Monday, as representatives of their parties spoke in Gaza, veteran prisoners Marwan Barghouti, a Fatah PLC member, and Abbas al-Sayed, a senior Hamas leader, both recipients of multiple life sentences by Israeli military courts, announced they would join the strike in solidarity with administrative detainees, former Palestinian minister of prisoners' affairs Wasfi Qabha said.

Their participation is likely to spur their movements to greater support for the strike, as well as boosting the reconciliation bid, according to al-Wuhaidi.

"Because of the dispute between the factions before, even the issue of detainees was affected," he said. "Our efforts weren't at their maximum, and didn't meet the expectations of the prisoners."

Unity between factions, he thinks, will help them coordinate their efforts to support the prisoners, whether through the diplomacy and negotiations of Fatah or the armed resistance favoured by Hamas, Palestinian Islamic Jihad and others. "Reconciliation is necessary to pressure the Israelis by uniting our strategies," said al-Wuhaidi.

"It's very important for both kinds of operations to follow the same line," Almodalal agreed. "We cannot separate them, or give up on one of them."

The prisoners, she added, can bring supporters of the different approaches, as well as parties, together. "They are the sign of our freedom, our steadfastness, and our independence."

As the strike, called the "Freedom Revolution" by participants, enters its third week, supporters are making plans for a long fight.

"This battle of freedom will last until the prisoners get their rights," al-Wuhaidi said. "They're not going to give up." Road To Peace
Exclusive: When Palestinian prisoners slip through the net