Can Islamic State win a foothold in Lebanon's Tripoli?

There are some outward signs of support, but underlying grievances tend to be very local in nature 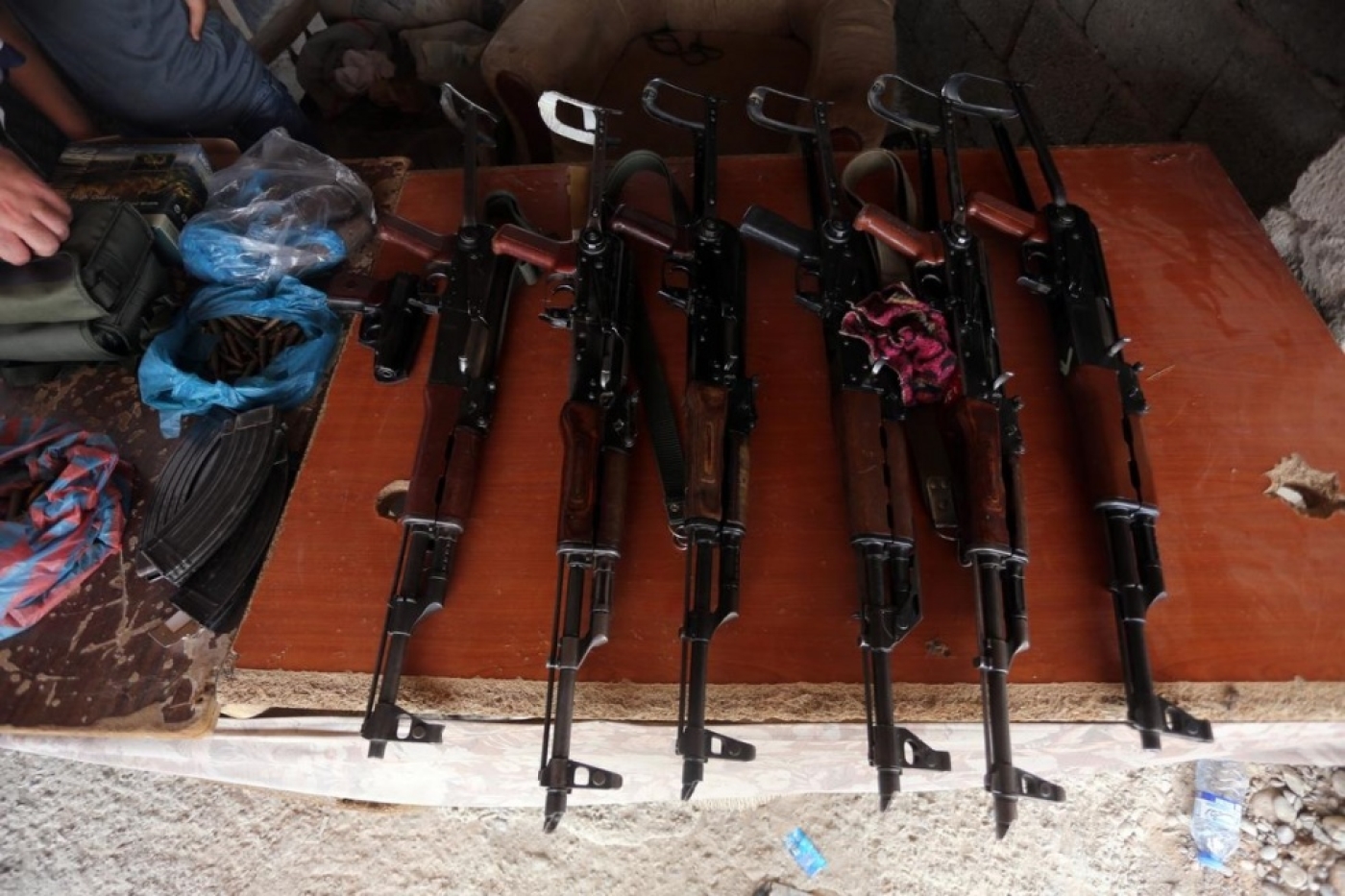 TRIPOLI, Lebanon: “May the revolution in Iraq succeed” banners have become an almost familiar sight in Tripoli in recent months where the main Nour square has come to bear witness to the rising popularity of Islamic State.

As the group, which has long controlled swathes of eastern Syria, began its powerful march through western Iraq in June, supporters in the largely Sunni parts of northern Lebanon seemed to rally to the cause.

According to sources in the city, sporadic protests in support of IS have taken place, with hundreds of people turning out. Several social media accounts in Tripoli have also been posting pictures and videos of protesters marching through the streets waving the black IS flag.

The first such protest appears to have happened on 22 June, a few weeks after an IS-led Sunni insurgency swept through Iraq and captured its second city Mosul. It also came as Lebanon was rocked by several bombs in the space of one week, including a suicide attack that has since been linked to IS.

The potent combination of these events has forced many to question whether Lebanon is destined to become IS’s next target in a bid to form a new Caliphate across much of the region.

Ahmad Basha, a local business owner, is one of these Tripoli residents who appears to be flaming the much-talked about IS phenomenon.

Basha is a close associate of Saad al-Masri - the notorious Tripoli militant from Bab al-Tabbaneh who turned himself into police in April. The pair were so close that they appeared side-by-side when Masri was awarded a hero's welcome after “vacationing in Turkey” in March. Since Masri’s arrest, however, Basha has gone it alone.

The self-styled “youth mentor” has now turned his office into a makeshift headquarters for his supporters and claims that he played a key role in getting people to turn out for the pro-IS protests.

In the corner of Basha’s office/headquarters sits a young man sporting sunglasses over his head who people in the office refer to as the “minister of information.” The “minister” is not all that keen to give his name but he does openly boast about his Facebook pages, some of which have been shut down by the social media site for allegedly promoting terrorism.

“[Facebook] shut three of my pages so far but I keep creating new ones. They shut them down because of terrorism,” he said with a sarcastic smile, while also claiming that he was the force behind @Sunnanews, a twitter account with more than 21,000 followers that voices support for the IS and has posted several videos calling for the group to come to Lebanon.

Basha says that rallying young men is easy. All he has to do is promise that they will be able to hit back hard at Hezbollah, a “shared enemy” which is fighting alongside Syrian President Bashar al-Assad.

“Let us assume they [IS] would come,” Basha said. “If they are in a battle with Hezbollah - who believe the Sunnis killed Imam Hussain some 1,400 years ago - we would take [IS] in and fight alongside them because we would be fighting the same enemy.”

Yet while Basha does share a certain affinity with the group, his demands appear to be much more local in nature and largely directed at the government in Beirut, slammed for isolating Tripoli economically and politically and for being too close to Hezbollah.

For years, Tripoli has been a flashpoint for sectarian tensions in Lebanon and has seen battles, clashes and car bombings that have claimed many lives.

In the 1980s, Lebanese Alawite fighters of the Jabal Mohsen-based Arab Democratic Party fought alongside the Syrian regime here to try and root out the Islamist Tawheed party in Tripoli that was based in Bab al-Tabbaneh.

The conflict between the Sunni Bab al-Tabbaneh and Jabal Mohsen Alawite neighbourhoods calmed with the end of the civil war in 1990 but tensions have flared up sporadically ever since. Since the start of the Syrian conflict next door, these old rivalries have exploded once again with the latest round of fighting kicking off in April.

Those clashes prompted the usually weak Lebanese state to intervene and in April the army moved into Tripoli to enact its security plan, aimed at containing the situation in Lebanon’s second largest city.

Scores have been arrested while many others are believed to have fled to Syria. On the streets of Bab al-Tabbaneh, troops of the Lebanese Commando Regiment - known as Maghaweer and considered one of the Lebanese army’s strongest teams - can now be seen patrolling regularly. The mood, however, remains tense and for some the army’s presence has only worked to rehash old resentments.

“The oppression that the Sunnis feel in Tripoli is part of the unjust security plans,” says Basha.  “The security forces arrested hundreds of Tripoli residents who were involved in the battles. They only arrested 11 from the Alwiates of Jabal Mohsen."

“They presented us with a list of 63 people, which I saw myself, and we in return agreed to. However, they kept arresting other people who were not on the list."

“Also, why can Hezbollah go and fight in Syria with complete impunity from the Lebanese state but if one of us owns a gun he gets treated as a terrorist?” he added.

Violence has continued despite the ongoing crackdown. Several soldiers were killed and wounded in Tripoli on 3 August after gunmen attacked different army posts. Sources told media the strike was carried out in “retaliation for the Army’s operation against armed rebel groups in north east Lebanon” a reference to Arsal.

The town on the Syria border has seen fierce clashes recently between Syrian rebel and Lebanese army troops and has further increased the threat of a large-scale slipover into Lebanon.

Several protests have subsequently broken out denouncing the army’s operation in Arsal against the Syrian rebel group al-Nusra.

One such protest took place on 4 August.

Organised by the Committee of Muslim Scholars, a Lebanon-based Sunni group with reported links to al-Qaeda, protesters on the day were seen carrying flags that resembled those used by the Nusra Front and IS. (The two groups are bitter rivals in Syria but this rift does not appear to have translated to Lebanon.)

It wasn’t long before things got violent. When the army tried to prevent the protesters from marching toward the Tripoli-Akkar highway, several gunmen fired shots. The army responded with tear gas and later launched an operation to hunt down the gunmen.

IS is clearly hoping to capitalise on these kinds of tensions to gain a firm foothold in Lebanon. Whether it will be able to do so is another matter.

Waleed Tabouch, Imam of the Khalid bin Alwaleed mosque in Bab al-Tabbaneh in Tripoli explains that apparent support for IS in the city is far from clear cut.

“People here are against violence and against the extremism of IS and al-Qaeda,” says

“However, we are with them in terms of Islamic faith and religion. As a religion we are one, all the Islamic world are Muslims. But most Muslims are against violence.”

Instead, the grievances are largely local in nature.

“The incident that infuriated people was the arresting of Ibrahim al-Edilbi who is a close friend of the Houssam Al Sabbagh [a Lebanese-Australian reclusive figure whom al-Nusra calls its representative in Lebanon],” says Tabouch.

“That is why the protests happened. [One day before the protests] the army surrounded Salem al-Rafei’s house. The Sheikhs and the youth wanted to send a message to the state that ‘enough is enough’.

“Of course people here think that when oppression gets harder it causes people to explode. People watched as the revolution in Iraq gained ground and that is why the youth were energised by what happened in Iraq,” he adds.

According to Tabouch, the solution is simple. “If the government takes the right path, we will never need anything from the outside,” he says.

Ibrahim al-Saleh, the director of Muntada Tarablos, a centre of political and strategic analysis in Tripoli, is even more critical of the supposed assumption that IS has true support in Tripoli.

“I can tell you one thing for sure, there is no IS in Lebanon and it doesn't make any sense for IS to be here in Lebanon,” says Saleh.

“IS is in the east of Syria and not in the west of it. In the west we have al-Nusra. Al-Nusra has people who identify themselves as members of the group within Lebanon such as Houssam al-Sabbagh. He doesn't deny his affiliation with the group.”

Sabbagh is one of Tripoli’s most reclusive Islamists who is believed to have fought in Afghanistan and Chechnya. A dual Lebanese-Australian national, he has warrants for his arrest in both countries.

“Regarding the demonstration that took place in Tripoli, in my simple viewpoint, it is a security move by the Lebanese authorities,” says Saleh. “Informants were asked [by security forces] to raise the IS flag in order to see who would get attracted to it, take their names and pictures and start following them.

“This is a security move in order to find out if there was anyone with IS. Certainly there is no IS not only in Tripoli, but in Lebanon. All security agencies work like that when they lack certain info.

“In Lebanon, they lacked information about IS and wanted to make sure that they had all the information they needed especially following the bombings in Beirut and Hamra,” he adds.

There is also a feeling that, for all its troubles, Lebanon, remains more united and stable than war-torn Iraq where IS has made inroads.

Former Prime Minister Nouri al-Maliki "was refusing the demands of the Sunnis in Iraq, which even the Shia leaders were agreeing with. In Iraq, it started after the fall of Saddam Hussein and escalated during Maliki.”

These tensions created a unique set of circumstances, which allowed various Sunni factors, including forces allied to Saddam’s old regime, to temporarily back IS.

“IS is a mask for Iraqi Ba'ath movement, Sufis and the Sunni powers. IS was used by those groups in order to take over Mosul,” says Salah.

In Lebanon the politics are different. The shifting alliances of the Sunni-supported Future Movement, headed by former Prime Minister Saad Hariri, has offered a different Sunni-Shia dynamic in Lebanon, he asserts.

“In the past, the Sunni extremist militants in Tripoli, who were opposing the Syrian presence in Lebanon, were a mask for the Future movement,” says Saleh. “But when the Future movement came to power [in 2009] their ministers were always on good terms with Hezbollah's ministers and they were together fighting extreme groups.”

Yet, with more than a million Syrian refugees in Lebanon and fighting already spilling over the border, many in Lebanon continue to worry that their little Mediterranean country will get swept up in the regional uncertainty.