Canadian police investigating fire at hotel that houses refugees, many from the Middle East A fire last week in a Toronto hotel that houses refugees is being investigated as a possible case of arson, Canadian media reported on Thursday.

Police said that they found matches beside a gasoline canister and are reviewing footage from surveillance cameras, a CBC report said.

An employee spotted the canister aflame on the hotel’s third floor on 2 October.

The fire set off a smoke alarm, which prompted the refugees to bundle their families out of the hotel late at night.

A Sudanese refugee who did not want to reveal her name said: "It was like a nightmare." Fortunately, the fire did not kill or injure anyone.

"We were holding the children - even other people's children - because they were in hurry and they were crying. Most of them they were almost sleeping," she said.

The hotel - the Radisson Hotel Toronto East - houses 577 refugees, many from the Middle East.

The Sudanese refugee added that the hotel has been a target of harassment.

Far-right and anti-Muslim groups have singled out the hotel for its decision to house asylum seekers.

According to a Buzzfeed news report on Thursday, three far-right YouTube personalities entered the hotel, filmed refugees without their consent and asked where they came from.

Last week, a Canadian columnist published a fake claim that goats were being slaughtered at the hotel.

A spokeswoman for the hotel dismissed the claim.

"Radisson Hotel Toronto East can confirm that the claims of goats being slaughtered in the public bathrooms are completely false," spokeswoman Laura Langemo told BuzzFeed News.

No arrests have been made yet in the arson case. 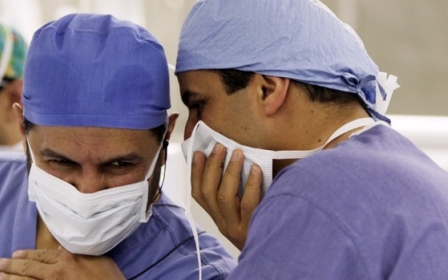