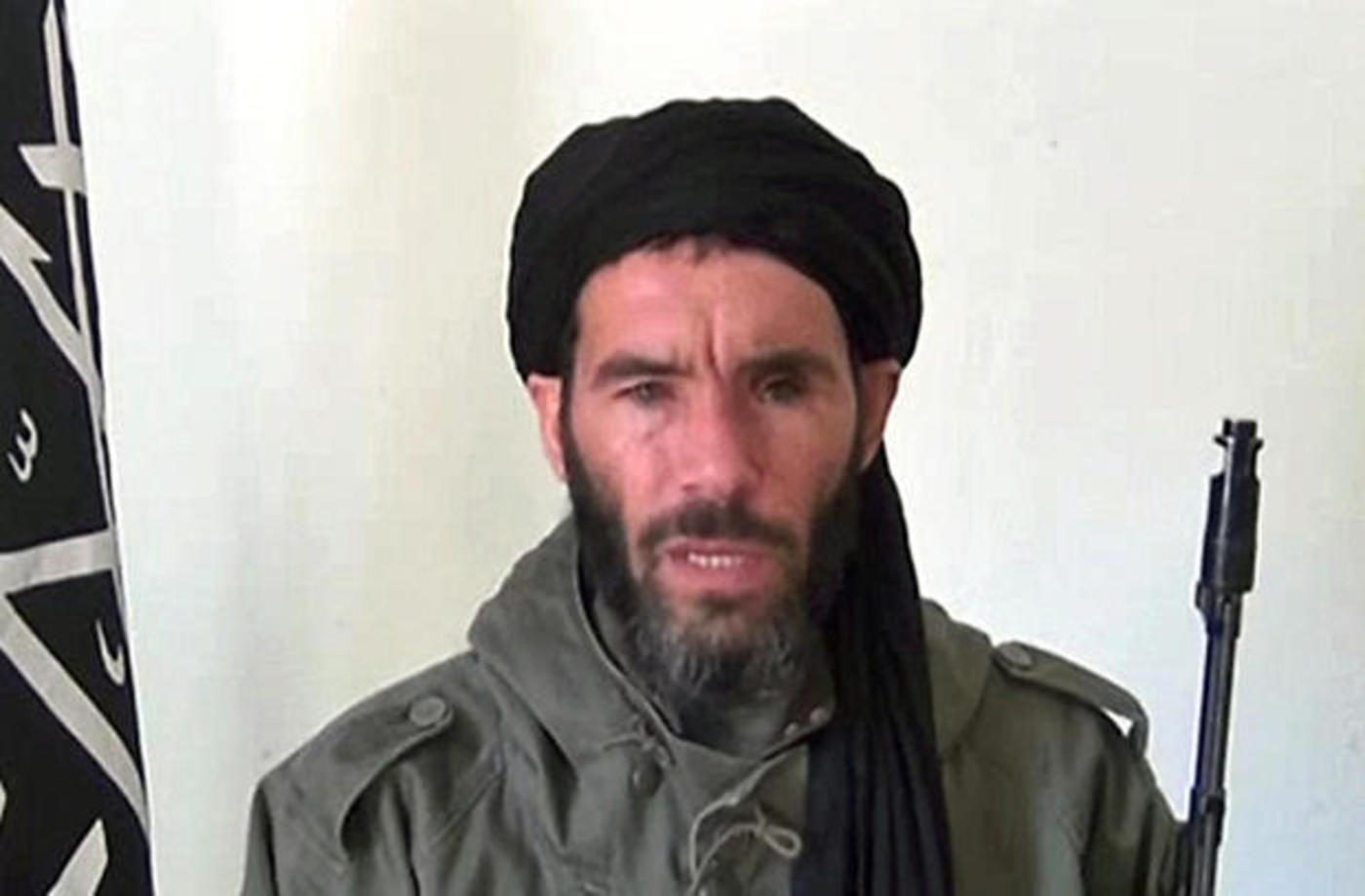 Mokhtar Belmokhtar, one of the most wanted Islamists in the world, is allegedly married to three women (AFP)
By
MEE and agencies

A woman described as the wife of a most-wanted leader of a North African militant group, Mokhtar Belmokhtar, has been arrested in Libya, where she gave birth to his child, according to the authorities in eastern Libya.

Mokhtar Belmokhtar, head of the Al-Mourabitoun group, which is affiliated to Al-Qaeda in the Islamic Maghreb (AQIM), is one of the most wanted militants in the region.

According to the anti-terrorism department of Libya's eastern government, which is not recognised by the international community, his wife is Tunisian and named Asma Kadoussi. She was seized on her way to the Islamist stronghold of Derna, in Libya, and said that Belmokhtar is alive and currently in the south of Libya.

She gave birth to a girl six weeks ago, according to Sami al-Mathrih, a spokesman of the anti-terrorism department, speaking to Reuters.

“She would be Belmokhtar’s third wife,” a source in the Algerian military intelligence told Middle East Eye.

“Belmokhtar first married in the late 1990s to a Malian woman from the [Arab] Barabich tribe. He then married another Malian woman, from the Al-Amhar tribe in the north-east of Mali. Lately it had been reported that he married a Libyan from Derna. We now know that she is Tunisian.

“There is nothing surprising. Most of the emirs have more than one wife, and, like all Muslims, they can have four.

“However we know much less about his children. There have been a few ones, including one he had with his first wife who joined the armed groups.”

According to the authorities in the east, Kadoussi was travelling with another Tunisian woman, Afa Hadji. The two women had been hosted in Derna by a member of al-Qaeda called Djibril al-Abd.

On Sunday, MEE revealed that the two women were arrested less than 48 hours after a US strike on a village where three AQIM emirs were supposed to meet, in the south-west of the country.

They were arrested on a road south of Derna after the hospital staff of Derna reported that a foreign woman presented herself without a husband to give birth, according to the authorities’ statement.

According to initial investigations, the two women were in the “terrorist camps” with Belmokhtar in the Djoufra oasis region in central Libya. He allegedly sent the two women to Derna for the birth, the statement said.

The authorities have published pictures of Tunisian IDs and fake Libyan passports that were used by the two women.

Derna is a stronghold for Libyan Islamists. The Islamic State group (IS) took control of the city in 2014, before being pushed out by other Islamists.

Belmokhtar has been reported dead numerous times before resurfacing again to prepare attacks and kidnappings.

He was seen as being behind the hostage crisis on a gas site in Tigantourine, Algeria, in early 2013, during which 40 of the staff were killed.

Belmokhtar has fought in Mali, Afghanistan

Belmokhtar, who is in his forties, fought in Afghanistan in the early 90s before joining the Armed Islamic Group (GIA) in Algeria. He then participated in the creation of the Salafist Group for Preaching and Combat (GSPC) that eventually became AQIM.

In June 2015, he was targeted by a US air strike in Ajdabiya in eastern Libya, but his group later announced that he had survived.

In an interview with the GSPC’s magazine, Belmokhtar told how he escaped death in Ouargla, southern Algeria, in 2005, along with Yahia abu al-Hammam (emir of the Sahara) while fighting the Algerian Special Forces.

According to the website Ansar El Moudjhidine, he also escaped death in 1999 when he and a group of armed men were ambushed by the Algerian army north of Bordj Badji Mokhtar on the border with Mali.

Belmokhtar also survived the battle of Tigharghar in Mali, when French, Malian and Chadian forces fought against armed Islamists.

Analysis
Netanyahu and Abbas are making promises they hope to break
Coronavirus
Saudi Arabia to end coronavirus curfew on 21 June, except in Mecca
Coronavirus
Dubai to ease restrictions as UAE coronavirus cases exceed 30,000