Catching a break in Yemen's crucible of war

Al-Turbah in rural Taiz, once a drab fish market, has exploded with activity with the arrival of hundreds of thousands of urban refugees The baize is frayed and bridge rests are taped together at odd angles, but snooker is all the rage (MEE)
By
MEE correspondent

Al-Turbah, Taiz, YEMEN - In the bustling market of al-Turbah, there is seemingly nothing that can't be secured for a price. Haberdashers set up beside arms dealers, the smells of tea and breakfast beans waft over great bushels of qat lying on the pavements.

Among the thousands thronging the square, one hawker makes a brisk trade selling "discipline" canes to teachers for a few cents.

And in the basement of one building, in this corner of rural Yemen, stands a hall devoted to perhaps the most British of pastimes - snooker.

Its walls are bare, the baize is frayed, and broken bridge rests are taped together at odd angles. But in here, in this crucible of war, Yemeni refugees from Taiz are clinging to the comforts of home and spreading their uptown ways to locals.

The al-Shimayateen snooker hall and gym is just one of many "clubs" to have formed around al-Turbah, as refugees rub shoulders with locals and their worlds intermingle. Another club is devoted to PlayStations, another to kung fu, and another to bodybuilding.

Only 70km from Taiz city, such things were almost unheard of until the influx of 200,000 refugees from the cities.

A new social life is the result, and the bustling al-Turbah, once a drab market where fish were the biggest attraction, has become a hotbed of activity.

Moneer Abdu Raheem set up the al-Shimayateen snooker hall and gym after war last year forced the 27-year-old to shut a similar business and flee the Bab Mosa area of Taiz city.

"I wasn't working between April and August, and then I decided to open the club in al-Turbah market as there are many refugees. Then I entered Taiz and brought bodybuilding and snooker gear," Abdu Raheem told Middle East Eye.

"Most of my customers are from the displaced people, and there are some people of the rural areas who come to learn the game, and many have started to come every day.

"They like the idea of the clubs even if they are new, so I will not close this down even after the war in Taiz city."

Shoaib Ismail, 21, said he had not heard of snooker before last August but is now addicted. That addiction has perhaps weaned him from another - to the mild stimulant qat that is chewed by many in rural areas of Yemen.

"I started to chew qat with my friends in the village five years ago, as we do not have work to do in the afternoon, but nowadays I visit the club, and this way, I can avoid qat," he told Middle East Eye.

Ismail and his friends play from 3pm to 5pm then go to Osama al-Zuraiqi's cafe for sandwiches and tea as the sounds of traditional Yemeni oud music mix with the noise of the market.

Yet, even while they relax, signs and sights of the war are all around. About 30 metres from Zuraiqi's cafe sits Haza'a al-Sobaihi, one of many gun dealers in al-Turbah.

Trade for him is brisk, too.

"I am originally from Lahj, and the weapons there are cheaper than in al-Turbah, so I buy the weapons from Lahj and sell them here," Sobaihi told MEE.

"I have worked here [since] one month ago, and all the arms traders on the pavements are from Lahj," he said, pointing out that checkpoints on most routes to other provinces make it next to impossible to bring weapons in.

The war in Taiz did not discriminate between rich and poor, and many wealthy families found themselves running from the bombs to places like al-Turbah. Here, they have added fuel to another booming market - that of property.

Many with money have bought land to build new homes or have bought or rented already existing houses. That has had a dramatic effect on house prices, and has forced many poorer refugees into makeshift camps.

Khalid Abdul Kareem, 52, worked as a dentist in Taiz before fleeing in April 2015 for the village of al-Qahfah, al-Turbah, but he could not live in his cousin's house and bought land instead.

In such circumstances, Bassam al-Himiari, 35, a professor in Taiz University, has found living in Turbah difficult.

"When we came to al-Turbah market, we started to look for a house to rent, but we found the houses were full of refugees. Rents had doubled, so we moved further out," he said.

"The owner of the house that I rented moved into his son's home in order to get money from rent."

But the traders in al-Turbah have never had it so good.

Back in the market place, as vendors fold their blankets and pull in their awnings at the end of another busy day, Osama al-Zuraiqi stands in his small cafe, which is hardly big enough for him and his work station, while customers sit on the pavement ordering tea and sandwiches.

Zuraiqi used to close up at 2pm, but since the war he stays open until 11pm.

"There were not many customers before the war in Taiz," he said. "During the last 10 months custom has more than doubled - and I make three times as much money."

“I’m so happy with business, I hope the refugees decide to settle here and never go back to Taiz city.” 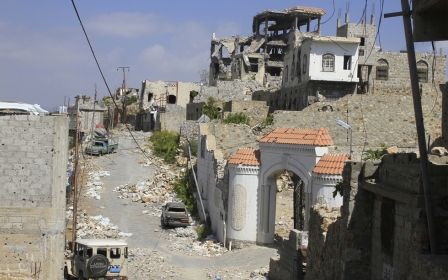 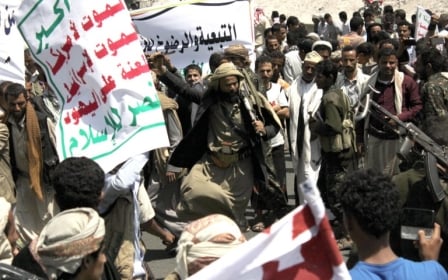