US congresswoman Betty McCollum has slammed Israel’s “chilling attack” on Palestinian rights groups, as the Biden administration seeks answers as to why the organisations were shut down.

“Once again the IDF has launched a chilling attack on Defense for Children International - Palestine, a human rights organization supporting Palestinian children,” McCollum said in a Tweet.

Once again the IDF has launched a chilling attack on Defense for Children International-Palestine, a human rights organization supporting Palestinian children. The Biden admin. must condemn these efforts to silence groups advocating for Palestinian human rights & civil society.

Defense for Children International is one of seven groups in the occupied West Bank that Israel shuttered on Friday, with soldiers storming the groups’ offices and confiscating items.

Besides Defense for Children International, Israeli troops also sealed off the offices of Al Haq, one of the West Bank's most well-established NGOs, which has documented human rights violations by Israel and the Palestinian Authority since the 1970s.

Many of the organisations have received funding from EU countries.

In October, Israel declared six of the groups (excluding the Union of Health Work Committees) as terrorist organisations.

The groups have denied the allegations and their closure has been met with criticism from both the United Nations and human rights organisations.

The foreign ministries of Belgium, Denmark, France, Germany, Ireland, Italy, the Netherlands, Spain and Sweden have all said Israel has failed to provide them "substantial information" on the accusations and pledged to continue cooperating with the groups in the absence of any evidence. State Department Spokesperson Ned Price said on Thursday that Washington was "concerned about the closure[s]”, but stopped short of criticising the move. Price said US officials were in contact with their Israeli counterparts "at a high level" to obtain more information on the decision.

McCollum was one of 22 lawmakers who urged the Biden administration to publicly reject Israel’s October move to designate the NGOs as terrorist organisations.

In an 18 July letter addressed to Secretary of State Antony Blinken and Director of National Intelligence Avril Haines, lawmakers asked the White House to conduct an inter-agency briefing on the move and provide a report to Congress within 30 days.

“A reported lack of evidence to support this decision raises concerns that it may be a deeply repressive measure, designed to criminalize and silence prominent and essential Palestinian human rights organizations,” the letter stated.

MEE reached out to the State Department multiple times to see if a review was conducted, but had not received a response by the time of publication. 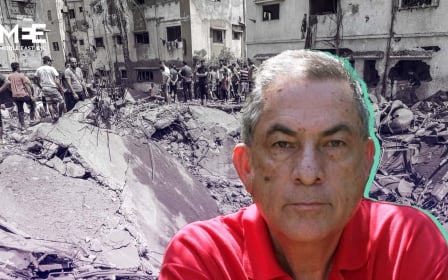 Gaza Under Attack
‘Israel only knows one language’: Gideon Levy on why Israel bombed Gaza