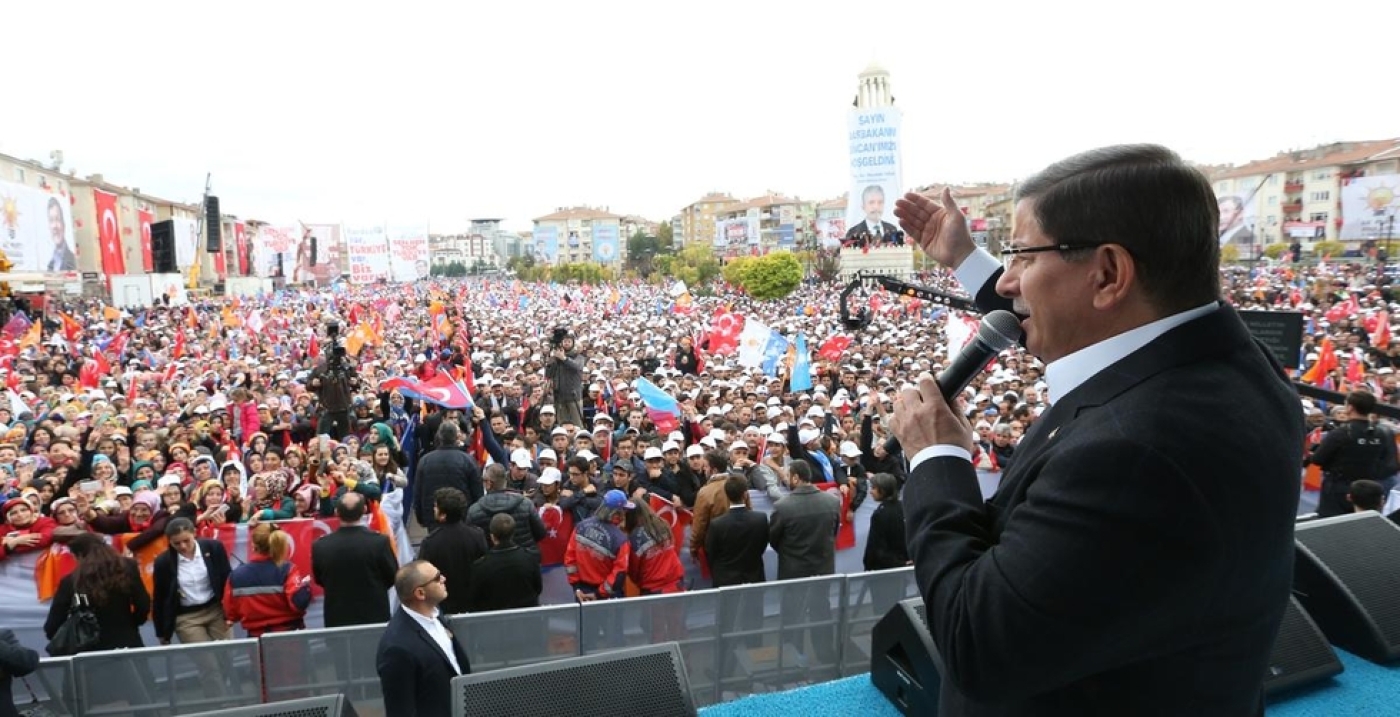 Turkish Prime Minister Ahmet Davutoglu's mild-mannered demeanour belies his abilities as a tough negotiator and strategic thinker who had been at the heart of government since Recep Tayyip Erdogan first came to power in 2003.

But the bookish former academic has had to battle to keep his Justice and Development Party (AKP) united in the face of a major election setback and risks losing his own job should it come up short again on Sunday.

Davutoglu has been under pressure as leader of the once-insurmountable AKP to show a political vigour that can match the shrewd and dogged charisma of the premier-turned president.

He has also had to fend off sharp criticism of AKP policies which have left Turkey divided at home and increasingly isolated on the world stage.

Under the 56-year-old Davutoglu, the AKP for the first time in 13 years failed to win a majority in parliament in the June election.

He was unable to form a coalition government -- an unpalatable alternative in any case for Erdogan who was banking on winning enough seats in parliament to push through his plans to expand the powers of the president.

Usually softly-spoken, the bespectacled Davutoglu has occasionally dropped his kindly smile and raised the decibel count at campaign rallies in feisty outbursts more reminiscent of his predecessor.

Davutoglu became premier and leader of the AKP in 2014 when Erdogan was elected president.

In Erdogan's absence, the party is showing signs of cracks over the fate of the collapsed Kurdish peace process and a very public war of words between top party figures.

At an AKP congress in September, there were rumours Davutoglu could face a leadership challenge from another Erdogan loyalist.

Ultimately he was re-elected unopposed but there is speculation he will be battling for his job should the party again fail to win enough votes to rule alone.

After an academic career as a professor of international relations, Davutoglu became one of Erdogan's top advisors in 2003.

He was promoted to foreign minister in 2009 and since then has overseen Turkish policy on the string of crises which exploded since the Arab Spring, including the Syria conflict.

Encouraged by Erdogan, who has always pushed for Turkey to become a world power, Davutoglu has sought a pivotal role for the country as a mediator in conflicts in the Middle East.

This new policy was not always welcomed and sparked accusations that the Islamic-rooted government was promoting "neo-Ottomanism" and even "pan-Islamism" in seeking to restore Turkish influence throughout the former Ottoman Empire.

He has rejected accusations that the NATO member and EU candidate is shifting away from the West, arguing that Turkey is ideally positioned to reach out in multiple directions.

Davutoglu advocated a policy of "zero problems" with its neighbours and embarked on fence-mending efforts with countries such as Armenia.

But the Arab Spring left Turkey with a myriad of problems in its backyard.

A fluent speaker of English, German and Arabic, Davutoglu was born in Konya, one of Turkey's most religiously conservative provinces and a bedrock of AKP support.

He has published influential books on international politics. His own vision for Turkey is summarised in his book "Strategic Depth", seen as the key theoretical work on the current foreign policy.

The premier has admitted he misses academia but tries to turn town squares into lecture theatres.

"I ask questions and receive answers. If there's a wrong answer, I say it is not correct," he told AFP in June.

Married with four children, Davutoglu dedicates time to his family outside work but he barely finds time for anything including his passion for reading, his wife Sare, a gynaecologist, told AFP.

A pious Muslim whose wife wears a headscarf, he often uses religious rhetoric.

At one campaign rally, Davutoglu said his party could even help those who were struggling to find a mate -- a proposal which sparked much mirth on social media.

"You have a job, a salary, food, what's left? A partner," Davutoglu said.

"When you want to get married, you go to see your parents first. God willing, they will find the ideal person. If that's not the case, speak to us." Turkey At War
Ankara bombings were ordered by IS to disrupt vote: Prosecutors