A Saudi Arabian man who died of a heart attack on Wednesday while showing signs similar to Ebola was not infected with the virus, early test results show A Saudi Arabian man who died while showing symptoms similar to Ebola was not infected with the virus, according to initial test results cited by health authorities on Saturday.

The health ministry announced Wednesday that the man had died of a heart attack.

The ministry has received a "preliminary laboratory result" from Atlanta showing that the man had tested negative for Ebola, it said in a statement carried by the official SPA news agency.

The "same US laboratories will carry out further precise and developed tests to ensure the absence of other viruses that could cause haemorrhagic fever," the symptoms the man had upon his return from Sierra Leone, the ministry said.

It is awaiting results of testing in Germany in the same case.

Since breaking out earlier this year, the tropical virus has claimed almost 900 lives and infected more than 1,603 people across West Africa.

The Saudi case was announced Tuesday by the health ministry, which said the patient had been quarantined in hospital in the Red Sea city of Jeddah.

In April, Saudi Arabia announced a ban on visas for Muslims from the three West African nations of Guinea, Liberia and Sierra Leone wishing to perform the pilgrimage to its Muslim holy sites.

World Health Organisation (WHO) chief Margaret Chan, declaring the epidemic a global health emergency, said in Geneva Friday it was the worst of its kind in four decades.

Ebola causes severe fever and, in the worst cases, unstoppable bleeding. It is transmitted through close contact with bodily fluids, and people who live with or care for patients are most at risk. Health
Lebanon takes steps to guard against entry of Ebola 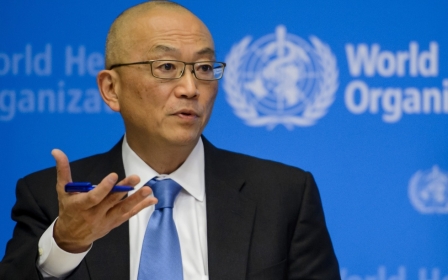