Egypt has added retired national football captain Mohamed Aboutrika, one of the country's most renowned athletes, to a terrorism list for alleged ties to the outlawed Muslim Brotherhood, his lawyer told Reuters on Tuesday.

Egypt has listed the Brotherhood as a terrorist organisation and jailed thousands of its supporters since the military removed the Brotherhood-backed president, Mohamed Morsi, from office in July 2013 following mass protests against his rule.

A committee established to seize and manage Brotherhood properties and funds had previously frozen the former player's assets.

Aboutrika has denied supporting the Brotherhood, which maintains that it is peaceful, but was seen as supporting the former president's election campaign in 2012.

A terrorism law passed in 2015 and heavily criticised by international human rights groups requires Egyptian authorities to identify and list terrorist individuals and entities as well as stipulates penalties that range from five years in prison to death.

Egypt, the Arab world's most populous nation, is facing an increasingly violent insurgency in Northern Sinai, where the country's most active militant group has pledged its allegiance to the Islamic State group.

Cairo and other cities have also witnessed militant attacks.

The former midfielder, who led the country's national team for roughly a decade, is currently in Gabon as a commentator for the Africa Cup of Nations tournament.

His lawyer, Mohamed Osman, declined to specify when he might return to his home country, but said the decision, made by a Cairo criminal court, would be appealed.

Roughly 1,400 other individuals considered to have alleged Brotherhood ties were included in the decision, Osman added. 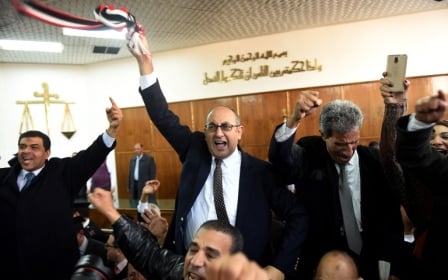