Egypt calls for US restraint in Ferguson Egypt is calling for restraint from US authorities in the city of Ferguson, adding support to a UN appeal urging US authorities to deal with protesters “according to the American and international standards”, reports The Daily News Egypt.

Protests have erupted this week in the Missouri town where a white police officer shot and killed 18-year-old Michael Brown, an unarmed black teenager, unleashing a debate over police treatment of minorities in the United States.

Peaceful demonstrations in Ferguson began soon after news of the teen's death, but clashes flared between protesters and police and the National Guard has been sent in to control the events. Police have been heavily criticised for overly harsh tactics including the use of tear gas.

Discussing Ferguson at a press conference on Tuesday, an Egyptian Foreign Ministry spokesperson referred to comments made by UN Secretary General Ban Ki Moon on Monday in which the UN head called for US authorities to ensure that the rights to peaceful assembly and freedom of expression are protected.

Ban's comments, the spokesman said, are a reflection of the "international community's position towards these events."

Leaders of Egyptian human rights groups say they are facing a crackdown on their activities, particularly as a new law on associations may criminalise their operations, according to a report in Al-Monitor.

“What we're currently facing is the police storming our offices and arresting us at any moment,”  Mohamed Zaree, head the Egypt program at the Cairo Institute for Human Rights Studies (CIHRS) and a leading human rights worker, told Al-Monitor. 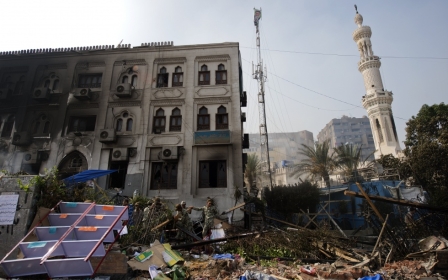