Egypt's President Abdel Fattah al-Sisi has declared a three-month state of emergency in Egypt after twin church bombings by the Islamic State that killed dozens of people in two cities.

Sisi announced the "state of emergency for three months" in a defiant speech at the presidential palace on Sunday, in which he warned that the war against the militants will be "long and painful". In a statement issued on social media, IS claimed responsibility for the bombings which left at least 40 dead and threatened more attacks against the Christian minority.

The cabinet said Monday that the the state of emergency would begin from 1:00 pm (1100 GMT), although it was not clear whether it had begun. Constitutionally, the measure still needs approval from parliament - but that will be a formality, given the number of pro-Sisi delegates.

The attacks coincided with one of the holiest days in the Christian calendar, Palm Sunday, when believers celebrate Jesus Christ's triumphal entry into Jerusalem a week before Easter.

The bombings follow a church attack in December and come weeks before a visit by Pope Francis, who intends to show support for the country's Christian minority.

On Monday the Vatican said that the visit, on April 28 and 29, would still go ahead. Speaking to the Italian daily Corriere della Sera on Monday, Monsignor Angelo Becciu, the Holy See's number three, said: "What happened caused disorder and tremendous suffering, but it cannot stop the pope's mission of peace.

"Egypt has assured us that everything will go as well as possible, so we will go confidently.”

Meanwhile Israel closed its Taba border crossing into Egypt on Monday morning after warning of "an imminent attack there". Israeli citizens will not be able to exit from Israel into Sinai until after the conclusion of the Passover holiday on 18 April.

Here's the rocket which was fired from #Sinai and landed among tomato crops in a greenhouse in southern #Israel pic.twitter.com/RZvxsfcwHS

On Monday, a rocket fired from Egypt's Sinai region hit southern Israel but did not cause injuries or major damage, the Israeli army said. "A projectile was launched from the Sinai peninsula and hit in the Eshkol regional council,” the army said in a statement.

The new emergency law expand police powers of arrest, surveillance and seizures and can limit freedom of movement.

Egypt has had emergency law before -  but this is the first time that it has been applied nationally under the new 2014 constitution, which imposed limits on the president’s ability to impose it. In north Sinai, where the state is battling IS-aligned groups, it has been imposed on a semi-continuous basis since 2014. Under the new constitution, Sisi has to consult his cabinet before issuing an official emergency law declaration, after which the decision will be submitted to parliament. The declaration of emergency needs a parliamentary majority within seven days to be approved for three months.

Once that time period has expired, it can only be extended for another three months with a two-thirds majority vote in parliament.

What does state of emergency mean in Egypt?

However, the government can renew the state of emergency almost perpetually. All it need do is allow a few days between each six-month period, as it has done in north Sinai.

The emergency law grants the president, and those acting on his behalf, the power to refer civilians to State Security Emergency Courts, the Egyptian newspaper Mada Masr explained. There is no right of appeal to verdicts handed down by these courts, which the president can over-ride.

The emergency law also gives Sisi wider powers of censorship and communication interception. Article 4 of the emergency law grants the Armed Forces the authority to address any violations of these powers.

The Egyptian government is under pressure to show that it can secure the country and keep the Christian Coptic minority safe.

The Monday issue of Egyptian newspaper Al-Bawabah was confiscated after the paper pointed to a “security failure" in relation to the bombing of the two churches and asked for the removal of Interior Minister Magdy Abdel Ghaffar.

“We openly declared that what happened at the two churches, in our opinion, is a major security lapse and we must hold accountable those responsible, changing the current strategy in combating terrorism,” al-Bawabah's founder Abdel-Rehim Aly wrote in a statement. Aly is an Egyptian pro-Sisi MP and journalist.

Copts, who make up about 10 percent of Egypt's population of more than 92 million and who celebrate Easter next weekend, have been targeted by several attacks in recent months. In December, a suicide bombing claimed by IS killed 29 worshippers in a Cairo church.

A spate of militant-linked attacks in the restive Sinai Peninsula, including the murder of a Copt in the city of El Arish, led some Coptic families to flee.

Militants and Islamists accuse Copts of supporting the military overthrow of Islamist president Mohamed Morsi in 2013, which ushered in a deadly crackdown on his supporters. The group later released a video threatening Egypt's Christians with more attacks.

A recruitment attempt by #ISIS (and other jihadi groups, prior): MB talks a good game, but failed you. Join us!

More than 40 churches were targeted nationwide in the two weeks after the deadly dispersal by security forces of two pro-Morsi protest camps in Cairo on August 14 that year, Human Rights Watch said.

Sisi, who as then army chief helped remove Morsi, has defended his security forces and accused militants of attacking Copts in order to divide the country.

In October 2011, almost 30 people - mostly Coptic Christians - were killed outside the state television building in Cairo after the army charged at protesters denouncing the torching of a church in southern Egypt.

The first bombing at the Mar Girgis church in Tanta city north of Cairo killed 27 people, the health ministry said.

Emergency services had scrambled to the scene when another blast rocked St Mark's church in Alexandria, where Coptic Pope Tawadros II had been leading a Palm Sunday service.

Seventeen people, including at least four police officers, were killed in that attack, which the interior ministry said was caused by a suicide bomber who blew himself up when prevented from entering the church.

The ministry said Tawadros was unharmed, and a church official said he left before the explosion.

The private CBC Extra channel aired footage of the Alexandria blast, with CCTV showing what appeared to be the church entrance engulfed in flame and flying concrete moments after a guard turned a man away.

IS claimed responsibility for the Coptic Christian church bombings in the Nile Delta cities of Alexandria and Tanta. The militant group promised more attacks against Christians and security forces, identifying the attackers as Abu al-Baraa al-Masri and Abu Ishaq al-Masri, both Egyptian citizens.

According to Islamic State, in a statement issued on the Telegram messaging platform, Abu al-Baraa, responsible for the explosion in Tanta, was born in Kafr el-Sheikh, Egypt, in 1974 and was the father of three children. Abu Ishaq, who blew himself when prevented from entering a church in Alexandria, was a university graduate born in 1990 who lived in Kuwait, Syria and Turkey, IS said. 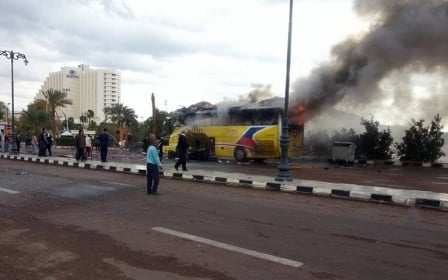