The three leaders of Egypt, Sudan and Ethiopia signed a preliminary deal on Ethiopia’s Nile dam project in Sudan’s capital Khartoum on Monday.

Egyptian President Abdel Fattah el-Sisi, Ethiopian Prime Minister Hailemariam Desalegn, and Sudanese President Omar al-Bashir all asserted their commitment to cooperation and to serve the interests of the three nations.

The estimated $4.8bn Grand Renaissance Dam, which Ethiopia views as essential for its economic development, has previously been received by Egypt with apprehension and sparked diplomatic tension between the two countries.

Relations between the two countries have improved, however, since al-Sisi and Desalegn met at an African summit in Equatorial Guinea last summer.

Egypt, which controls 87 percent of the river’s flow and has the power to veto upstream projects based on treaties signed from 1929 to 1959, feared that the project will lead to a marked reduction in its supply of Nile water. The country is historically dependent on the Nile for drinking water and agriculture.

Yet the deal signed today was based on a declaration of principles to ensure that the construction of the dam would not harm the other countries and will compensate them should it negatively affect their interests.

Ethiopian Prime Minister Gailemariam Desalegn reassured Egyptians that the construction of the dam would not harm their country, and reaffirmed Ethiopia’s commitment to preserving the interests of the three countries.

"I confirm the construction of the Renaissance Dam will not cause any damage to our three states and especially to the Egyptian people," Desalegn said at the signing ceremony.

Egypt’s Irrigation Minister Hossam Moghazy said that the deal, which is composed of ten principles, includes “respecting the recommendations of the consulting firm that is undertaking further studies on the fair and equitable use of [Nile] water.”

“It also includes a joint mechanism to regulate the initial filling of the dam and its annual operations while restricting the use of the dam to power generation only,” Moghazy added.

Sisi, who is expected to travel to Ethiopia’s capital city Addis Ababa on Tuesday to address the parliament, expressed that the dam project, which will be Africa’s largest upon completion in 2017, will offer Ethiopia great benefits and development.

“We have chosen cooperation, and to trust one another for the sake of development,” he said. “We in Egypt have no reservation on Ethiopian development. We wish Ethiopia all the best.”

The deal, Sisi explained, was a framework agreement that the three countries would build on, adding that Egypt’s water needs would need to be addressed as well. He reiterated Egypt’s commitment to working with Ethiopia and Sudan for the benefit and development of the three countries.

"We are committed to reaching detailed agreements" to finalize all issues related to the dam, the Sudanese leader said. 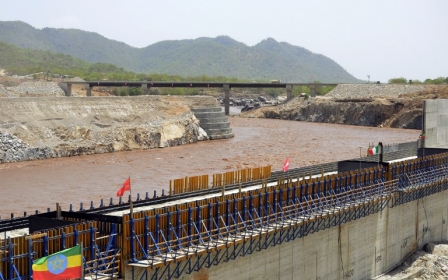