Egyptian presidential hopeful Ahmed Shafiq is set to deported back to Egypt - or may already have been deported - after being arrested by authorities in the UAE.

Shafiq, a former air force commander and government minister, is seen as the strongest potential opponent of President Abdel Fattah al-Sisi should the latter, as expected, decide to run for a second term in an election set for around April 2018.

UAE news agency WAM said Shafiq has left the Emirates, an ally of Sisi's government, for Egypt without giving any details on why or how he departed. It said his family had remained behind in the Emirates.

A Gulf source familiar with the matter said earlier: "Shafiq has publicly asked to go to Egypt and his wish will be met."

But Shafiq's daughter disputed those reports, telling Reuters that authorities had come for him at his home on Saturday and sent him to Cairo.

"We were about to leave to travel to France. They came and took him. They deported him in a private plane. They said they will deport him to Egypt," May Shafiq said.

Shafiq's lawyer on her Facebook page also said he had been taken from the family home.

A spokesman for Egypt's foreign ministry did not immediately answer a call seeking details. But an Egyptian judicial source told Reuters that Shafiq was not wanted in any criminal cases at the moment, but he had several cases, including for corruption, against him in the past that either ended in acquittal or were dropped.

"We have no information about a deportation order," the judicial source said.

His lawyer also confirmed to the BBC that Shafiq was set to be deported back to Egypt. It remains unclear why he was arrested by the Emirati authorities.

Shafiq has portrayed himself as the only presidential contender who combines civilian experience with knowledge of the military, which plays a powerful economic and political role in Egypt.

Born in 1941 in Cairo, Shafiq graduated from the Air Force Academy in 1961. He later completed a master's degree in military sciences and a PhD in military strategy.

He fought in three wars including the 1973 Arab-Israeli war, in which he was a senior fighter pilot under Mubarak's command. He is said to have downed two Israeli aeroplanes.

Shafiq served as commander of the Egyptian air force from 1996 to 2002 and then went on to become the country's first civil aviation minister, earning a reputation for administrative competence and efficiency.

It was widely believed that Mubarak helped set his career path, even creating the post of civil aviation minister to suit his old comrade and friend.

His restructuring of the state-owned airline, EgyptAir, turned it into a competitive business. He also renovated the nation's airports, giving a boost to the important tourism industry.

Prior to launching his presidential bid, Shafiq has reached out Egyptian opposition groups and has spoken directly to the Muslim Brotherhood, whose leadership Sisi has imprisoned.

He has argued that he can ensure a successful handover of power back to civilian leaders and has promised to change the way the army is treated by the state, making it pay taxes on the profit it gets from its wide range of businesses.

"You cannot suddenly bring a civilian man with no relation or knowledge of military life and make him a president and supreme commander of the armed forces," he told the Reuters news agency earlier this year.

Earlier this week, Shafiq told Al Jazeera that Emirati authorities had barred him from leaving the UAE.

"I was surprised to find I was prevented from leaving the United Arab Emirates, our sister country, for reasons I do not know and I cannot understand," Shafiq told Al Jazeera from his home in the UAE.

"I repeat my thanks for the gracious hospitality, but I reject any intervention in my country's affairs."

Shafiq went into a self-imposed exile in the UAE after narrowly losing to the later ousted Egyptian president Mohamed Morsi in 2012. He had earlier held the post of prime minister of Egypt for just over a month in 2011 under Hosni Mubarak. 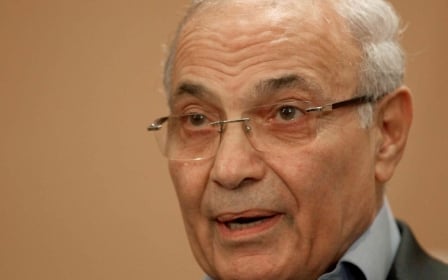