The controversial Egyptian judge, best known for sentencing hundreds of Muslim Brotherhood supporters to death in mass trials, has been reshuffled, various sources told the Associated Press on Thursday.

Judge Said Youssef, the judge who oversaw two high profile cases in southern city of Minya, told AP that he was informed on Sunday that he has been reassigned away from "criminal judiciary" to "civilian judiciary."

"I was notified while I was looking into cases," Youssef told AP. He added that his court, which is regarded as the "terrorism court" and charged with ruling on cases linked to violence and acts of terror, had been "dismantled."

Youssef did not give any reasons for his removal, but commentators are suggesting that the move looks like a demotion, as the civilian judiciary cases are lower key and the move is unusual for such a high-profile judge.

Youssef grabbed international headlines for handling two mass trials earlier this year in which he sentenced 1,200 largely Muslim Brotherhood supporters to death in a verdict that saw more people awarded the death penalty in one go than any other trial had done in recent memory.

The charges ranged from murder to trying to overthrow the government to knowingly joining an outlawed group. Of the 1,200 convictions, 1,000 have since been reduced largely to life in prison. Some 200, however, remain on death row.

According to the el-Shorouk daily newspaper, a judge can only be removed from the court in one of two cases; either the judge has been associated with an act that has damaged his reputation or an oversight committee has ruled that they are incapable of carrying out their duties.

Other officials, including a top judicial source, corroborated Youssef's account.

Gamal Abdel-Maguid, a lawyer who represented a number of defendants, nicknamed the judge "Said the butcher."

"The case caused an international earthquake and it was expected that judges would get rid of him after all the damage he caused," Abdel-Maguid said. 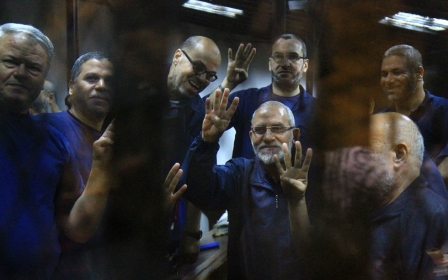