ISTANBUL, Turkey - US national security adviser John Bolton told a group of journalists accompanying him to Israel on Sunday that he was going to deliver a warning to Turkish President Recep Tayyip Erdogan not to target the Syrian Kurdish People's Protection Units (YPG) in a scheduled visit to Ankara on Tuesday.

Instead, the American delegation led by Bolton couldn’t even meet Erdogan. Bolton, along with Special Envoy James Jeffrey and Chairman of the Joint Chiefs General Dunford, was only able to meet Erdogan’s spokesperson, Ibrahim Kalin, and some Turkish deputy ministers.

By comparison with Bolton’s schedule in Israel, which included official meetings with Israeli Prime Minister Benjamin Netanyahu and top Israeli security officials, the two-hour long meeting itself seemed like a downgrade.

A senior US official, however, later told Reuters that Bolton did not consider himself to have been snubbed by Erdogan because plans for a meeting between the two had not been confirmed.

Turkish officials also cancelled a previously scheduled joint press conference, although Kalin said this had been at Bolton's request in order that he could return to Washington in time for a televised speech by US President Donald Trump on Tuesday in which he is expected to make the case for a border wall between the US and Mexico.

Following the meeting, a furious Erdogan, in a live broadcast, directly slammed Bolton for his remarks made in Israel.

“No one should expect us to accept or swallow national security adviser Bolton’s comments," he said, speaking to members of his Justice and Development Party (AKP) in parliament.

"They don’t know who the PKK and YPG are. They cannot be the representatives of our Kurdish brothers. He clearly made a serious mistake," he added, referring to the outlawed Kurdistan Workers' Party (PKK).

'No need for a meeting'

Erdogan said Bolton's counterpart was Kalin, not him.

"There was no need for a meeting," he explained.

Turkey 'only country' that can bring peace to Syria, Erdogan says in NYT
Read More »

Ankara also seemed to be cautious about evolving statements from US officials on the US withdrawal from Syria.

Several sources in Washington told Middle East Eye that Bolton and the US Secretary of State Mike Pompeo were whistling different tunes on the pullout, announced by US President Donald Trump last month, and there wasn’t a properly designed plan on the table yet.

“As it happened in the past, despite our clear agreement with Trump [on US withdrawal from Syria], different voices started to come out from different levels of [the American] administration. Nonetheless, Trump’s view on Syria and his decisiveness on the pullout continues to be our reference point,” Erdogan said.

He also declared that the Turkish military had largely completed its plans to counter Islamic State militants in Syria following the US withdrawal as agreed by Erdogan and Trump in a phone call last month.

Erdogan made it clear that the YPG could very well be Turkish military targets.

“We will soon move to crush Daesh targets in Syria, and if other terrorists try to intervene, it is a binding duty to break their necks,” he said, using an alternative name for IS.

We cannot plan anything in Syria without seeing US plans first. This leaves a lot of space for negotiations

In a separate statement to journalists, Erdogan said the operation in Syria could start at any moment and a phone call with Trump on the topic was already being arranged.

According to official sources in Ankara, who spoke on condition of anonymity due to the sensitivity of the topic before the meeting on Tuesday, Turkey was open to discuss several options in Syria.

These included establishing a buffer zone on the Turkish border that can also grant a living space in the far south for the People’s Protection Units (YPG), whose fighters were the main component within the US's anti-IS coalition in Syria, the Syrian Democratic Forces.

Turkish sources say any buffer zone should be deep enough to guarantee the security of the border.

Kalin said after the meeting that he had handed Bolton two red folders containing details of alleged war crimes by YPG fighters and a dossier of past efforts by Turkey in Syria and Iraq to protect or shelter Kurds.

He said the delegations had discussed details of the US withdrawal from Syria but had not specifically discussed a buffer zone.

He said the US officials had told them they had made an initial plan to collect weapons given to the YPG.

"We will closely cooperate with the US but we won’t get permission from anyone in our counter-terror operations," Kalin said.

The US senior official told Reuters that Bolton had told Kalin that the US would not tolerate any mistreatment of its Kurdish allies by Turkish forces.

The official also said that Bolton had been told that Turkey would not take military action while US forces were still on the ground in Syria.

Bolton also told Kalin that an op-ed article by Erdogan in the New York Times, in which the Turkish president said Trump had made the right call to withdraw from Syria, was "wrong and offensive", Reuters quoted the official as saying.

Turkey to ask US to hand over military bases in Syria: Report
Read More »

Several reports on Turkish media suggested that, depending on the US withdrawal plans in Syria, Turkey could also ask the US to either demolish or transfer ownership of 16 US bases to Turkish forces in northeastern Syria.

“We cannot plan anything in Syria without seeing US plans first,” a Turkish diplomat told MEE last week. "This leaves a lot of space for negotiations."

A source with knowledge of the topic also said that, even though Turkish military was sending reinforcements to the border and making preparations for lengthy operations, senior commanders continued to be wary of any large-scale effort in Syria.

A statement released by the US National Security Council spokesperson, Garrett Marquis, following Bolton’s visit in Ankara was diplomatic. He said Bolton had productive talks in Ankara with his counterpart, Turkish presidential spokesperson Kalin.

“[They] identified further issues for dialogue and emphasised the strong bilateral relationship between the US and Turkey."

He also said that that military to military consultations were scheduled on Wednesday to further discuss Turkish-US cooperation in Syria. 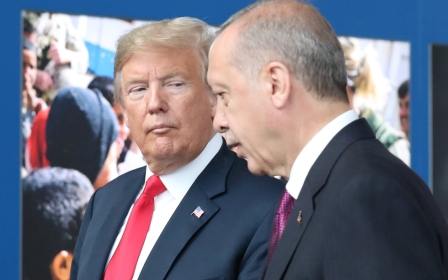