EU and US affirm Lebanon support, diverging from Saudi The European Union on Wednesday affirmed support for Lebanon following the resignation of Prime Minister Saad al-Hariri, echoing US backing for the Beirut government that Saudi Arabia has accused of declaring war.

Statements of support from EU ambassadors to Lebanon and the US State Department on Tuesday struck a sharply different tone to Saudi Arabia, which has lumped Lebanon together with the Iran-backed Lebanese group Hezbollah as parties hostile to it.

Lebanon has been pitched into deep crisis since the Saudi-allied Hariri resigned on Saturday in a speech delivered from Saudi Arabia in which he accused Hezbollah and Iran of sowing strife in the Arab world and cited fear of assassination.

The circumstances surrounding Hariri’s sudden resignation have given rise to speculation in Lebanon that he had been caught up in a high-level anti-corruption purge in Saudi Arabia, where his family made their fortune, and coerced into resigning.

Saudi Arabia has denied this along with reports that it has put Hariri under house arrest. It says he quit because Hezbollah was calling the shots in the government.

The move has pulled Lebanon back to the forefront of a regional struggle between the Sunni monarchy of Saudi Arabia and the Shia government of Iran, a rivalry which has also swept through Syria, Iraq, Bahrain and Yemen.

In a statement, the EU ambassadors said they reaffirmed “their strong support for the continued unity, stability, sovereignty, and security of Lebanon and its people”.

They called “on all sides to pursue constructive dialogue and to build on the work achieved in the last 11 months towards strengthening Lebanon’s institutions and preparing parliamentary elections in early 2018, in adherence with the constitution”.

On Tuesday, the US State Department said Lebanon was a strong US partner.

“We expect all members of the international community to respect fully those institutions and the sovereignty and political independence of Lebanon,” she said.

The United States classifies Hezbollah as a terrorist group.

But it is also a major sponsor of the Lebanese military, which receives support from Britain as well.

Lebanon has also received significant western aid to help it cope with the strain of hosting 1.5 million Syrian refugees, equivalent to around a quarter of the population.

Hezbollah, set up by the Iranian Revolutionary Guards in 1982, is the most powerful group in Lebanon, with a guerrilla army that out guns the national military and holds major sway in government.

Neither Hezbollah nor the Lebanese government have responded to accusations made by Saudi Gulf affairs minister Thamer al-Sabhan that both Lebanon and Hezbollah had declared war on the kingdom.

President Michel Aoun, a Hezbollah ally who took office last year, has refused to accept Hariri’s resignation, saying he first wants him to return to Lebanon so he can meet him in person to understand the reasons. 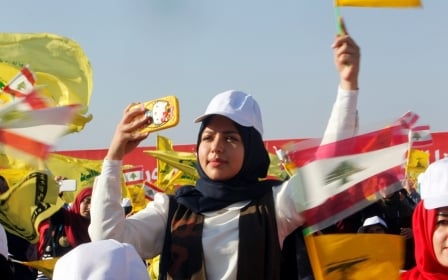