European Union leaders agreed on Wednesday to try to keep the Iran nuclear deal alive and maintain their reviving economic cooperation with Tehran after US President Donald Trump withdrew from the pact.

US National Security Adviser John Bolton then warned European companies that they may face sanctions if they continue to do business with Iran. “I think the Europeans will see that it’s in their interests to come along with us,” Bolton said on CNN.

Still, the 28 EU leaders did not make any quick decisions during their first meeting on the matter since Trump quit the accord earlier this month, highlighting how US clout in international trade and finance limits the Europeans' scope for action.

That was quickly brought home by the French energy giant Total, which joined other European companies in signalling on Wednesday they may exit Iran.

Total said it may quit a multi-billion-dollar gas project if it cannot secure a waiver from US sanctions. Tehran had repeatedly hailed the project as a symbol of the nuclear accord's success.

Such a move would be a blow to President Hassan Rouhani, who had hoped the prestigious project could make other international businesses regain confidence in Iran and bring in investment.

Looking at the latest decisions of President Trump, someone could even think: With friends like that, who needs enemies?

Still, European officials expressed determination in their efforts to save the Iran agreement.

"As long as Iran respects the provisions of the deal, the EU will also respect it," said Donald Tusk, president of the European Council and chairman of the leaders' gathering in the Bulgarian capital Sofia.

The leaders of Britain, France and Germany briefed their peers. The three countries were EU signatories of the 2015 deal that gave Iran sanctions relief in exchange for curbing its nuclear programme. Trump dismissed it as "the worst deal ever."

An EU source said after the talks the leaders agreed to start "work to protect European companies negatively affected by the US decision."

Options include allowing the European Investment Bank to invest there and coordinating euro-denominated credit lines from EU states.

Foreign ministers of Germany, France and Britain met their Iranian counterpart in Brussels on Tuesday and tasked their experts to come up with measures for a meeting of their deputies in Vienna next week.

But a senior EU official admitted there was no silver-bullet solution and that it would "take some time" for the bloc to come up with what would be a complex mix of national and joint steps.

The EU's top energy and climate official, Commissioner Miguel Arias Canete, is heading to Iran on 18 May for talks on energy cooperation, a symbolic gesture from the EU that it wants to stay engaged despite the US withdrawal.

As the EU scrambles to salvage an accord they see as a key element of international security and a diplomatic success, they also wonder about their ties with Washington.

Tusk's unusually biting criticism of Trump on Wednesday highlighted the deep trans-Atlantic split: "Looking at the latest decisions of President Trump, someone could even think: With friends like that, who needs enemies?" 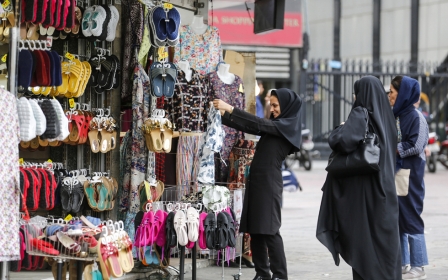