EU observer mission to Egypt back on after equipment released The European Union (EU) has said it will send a team to monitor upcoming elections in Egypt, just two days after cancelling the operation citing administrative obstacles.

On Saturday, an EU official had said the mission would not go ahead, saying “unfortunately, for administrative reasons, despite our best efforts and repeated requests, it proved impossible to have the telecommunication equipment and medical kits essential to ensure the security and safety of observers released on time”.

In Cairo on Monday, however, a spokesperson for the election monitoring team said the equipment had been released and around 145 monitors will be deployed throughout the country for elections planned to take place on 26 and 27 May. EU observer chief Mario David said the observation “does not mean the EU is legitimising the Egyptian election” at a press conference in Cairo.

In early May it emerged that the EU planned to go ahead with its observer mission despite a plea from the now banned April 6 opposition movement to stay away.

A letter from the April 6 movement sent to an EU ambassador said “suspending the mission…would send a clear message to [former army chief Abdel Fattah] Sisi as well as to the European and Egyptian public opinions that the EU can hardly accept and even participate in legitimising the current practices in Egypt”.

The EU responded to the letter by saying there is “no consideration that the [observer mission] should be withdrawn”.

The April 6 movement was launched on a Facebook page in 2008.  It was one of the first Egyptian opppostion groups to organise protests through social media, which helped gather momentum and supporters ahead of the 2011 revolution in Egypt that removed former president Hosni Mubarak from power.

The group was controversially banned in a ruling by the Egyptian Court for Urgent Matters last month, with the court finding the group guilty of a litany of charges including “cooperating with the US” and taking part in illegal protests. Defence lawyers said prosecutors had “no solid accusations” to back up the convictions.

Former army chief Sisi is widely expected to win the presidential election, in which his only opponent is leftist politician Hamdeen Sabbahi.

Egyptian expats from around the world have been casting their votes ahead of the national vote on 26-27 May, with local newspaper Al Ahram reporting that more than 265,000 people have taken part so far. Voting was supposed to close on Sunday but, according to Al Ahram, polls will stay open until 9pm GMT on Monday due to “overwhelming demand”. 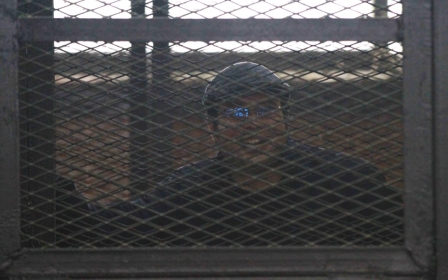