Announcment that ship will go to Djibouti for inspection removes the risk of a potential clash at sea between Iran, the US and Saudi TEHRAN - An Iranian cargo ship with food and medicines for Yemen which the Saudi and US naval authorities had threatened to block on suspicion that it might be carrying weapons for Houthi militia has changed its route and will not go direct to the Yemeni port of Hodeida, Iran’s Deputy Foreign Minister, Hossein Amir-Abdollahian, told MEE in an exclusive interview on Wednesday.

It will go first to Djibouti for inspection by United Nations staff, he said. Amir-Abdollahian's announcement removes the risk of a serious potential clash on the high seas, as a US warship has been shadowing the Iranian ship.

Only if there is a ceasefire around the Yemeni port of Hodeida and UN relief workers can deploy there will the ship, the "Iran Shahed", proceed to Hodeida, the deputy foreign minister added.

Amir-Abdollahian sought to downplay the potential crisis over the cargo ship by implying it had changed route, not because of Saudi or US threats, but because Hodeida was unsafe. "Since there was no ceasefire, there was no possibility of the containership going to Hodeida," he said.

Amir-Abdollahian also revealed that Mohammad Javad Zarif, Iran’s foreign minister, wrote on Wednesday to Valerie Amos, the UN emergency relief co-ordinator, proposing the establishment of "green zones" or safe havens around all of Yemen’s ports and airports to allow aid to come in safely.

Iran's moves come as the UN announced on Wednesday that the Yemeni warring parties would start political negotiations in Geneva on 28 May under UN chairmanship. "The secretary-general is pleased to announce the launch of inclusive consultations starting on 28 May in Geneva to restore momentum towards a Yemeni-led political transition process," a UN statement issued in New York said.

The talks follow extensive consultations by the secretary-general's special envoy to Yemen, Ismail Ould Cheikh Ahmed. They will be more wide-ranging than the US- and Saudi-sponsored dialogue held in Riyadh last week which excluded the Houthis, who have taken control of large parts of Yemen.

The UN move is being greeted with satisfaction in Tehran where Ahmed is due to travel on Thursday to meet Iran's foreign minister. It is in line with a four-point peace plan for Yemen which Iran put forward in March when Saudi Arabia launched its surprise air campaign against Houthi targets in Yemen. The Iranian plan proposes a ceasefire, the delivery of emergency humanitarian aid, a national dialogue between all Yemeni parties under UN supervision and the establishment of a government of national unity.

Asked if Zarif and John Kerry, the US secretary of state, had discussed the plan during their many hours of talks on the nuclear issue, Amir-Abdollahian suggested they had not. "The Americans are aware of our proposal through the UN," he said. Both sides in the nuclear talks have insisted that agreement on a deal must precede any exchange of views on other matters.

The deputy foreign minister made it clear that Iran sees no future role for Yemen’s exiled President Abd Rabbuh Mansour Hadi. Hadi first fled the capital Sanaa for the southern city of Aden, then flew to Riyadh to escape the advancing Houthis militia. "Since he resigned, his mission in Yemen is finished. His resignation was a strategic mistake. He could have stayed and worked with the different groups," he said.

"We believe many of Yemen's problems were caused by Mansour Hadi's mismanagement," he added.

Yemen's UN Ambassador Khaled Alyemany said all parties, including the Houthis, would attend the Geneva talks. "Of course President Hadi will be represented in Geneva," he told reporters in New York. "He might be sending Vice President and Prime Minister (Khaled) Bahah, he might be sending somebody else."

Yemen’s other former president, Ali Abdullah Saleh, who ceded power to Hadi in Yemen’s version of the Arab spring in 2011, has allied himself to the Houthi militia in what some observers see as an attempt to regain his old job. The Iranian deputy foreign minister said "he also could not have a very active role" but did not rule it out entirely. 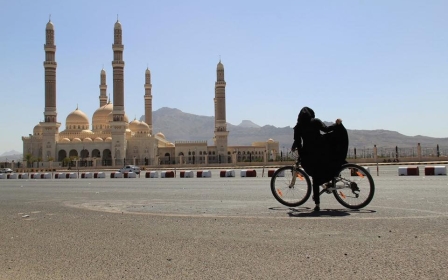