Family's search for truth over death of Palestinian 'hero' in Bulgaria

Because of lack of security at Palestinian embassy in Sofia, family of Omar Zayed say both Israel and PA should be held accountable for death On 26 February, more than 20 years after Zayed had begun a new life in Europe, he was found dead at the Palestinian Embassy in Sofia where he’d sought refuge after Bulgarian authorities notified him of Israel’s intentions to seek his extradition.

Zayed escaped from an Israeli prison hospital in 1992, after serving seven years of a life sentence for the slaying of a Jewish Israeli citizen. He denied committing the crime, and said that he was tortured by Israeli authorities into confessing to it.

He had spent more than two months in hiding at the embassy before he was found dead. During that time, Zayed was in constant contact with his family both in Bulgaria and in the occupied Palestinian territory.

His brother, Ahmad Zayed, who lives in the northern West Bank city of Jenin, said that in the weeks before his death Omar expressed fear that the embassy wasn’t the safe refuge he expected.

Omar’s wife, Rania Zayed, who is still in Bulgaria with the couple’s three children, told Middle East Eye that she’d visited her husband at the embassy frequently.

“There was no security,” Rania said. “That started to really concern us. He was there for protection, yet there were no guards, no security cameras, nothing.”

Because of the lack of security and the family’s view that the embassy didn’t take the threat to Omar’s life seriously, they are holding the Palestinian Authority just as accountable as Israel.

“We thought that, if anything, Israel might get into the embassy and kidnap him, take him back to Tel Aviv, but we never for a second thought that something like this would happen, that in this era Israel would get inside an embassy in the middle of Europe and assassinate someone,” Rania said.

Looking back over the past two decades, Rania recalled a happy, normal family life, very different from the tragic turn of events that shattered her family.

Rania was 12 years younger than her husband. When he went to prison she was only eight years old, and while the two are from the same city and extended family, she doesn’t remember him from her childhood, though she thinks they probably met.

Rania doesn’t recall encountering Omar until many years later, after he’d spent four years in hiding, when he was already living in Bulgaria.

“Omar came to Bulgaria because he had a brother already living here,” she told MEE. “He couldn’t make a life for himself in hiding in the West Bank, and his brother told him to come to Bulgaria, where he could have a job and build a free life out from under the occupation.”

Once Omar was settled in Bulgaria, Rania, 18 at the time, was contacted about marriage.

“He was a hero at that time. Any girl would have been honoured to be asked to marry him, so when I was asked of course I said yes,” she said.

Rania made her way to Bulgaria, married Omar, and started a new life in Europe.

The couple applied many times for Bulgarian citizenship but they were never granted approval. Instead, they lived in Bulgaria under temporary residency, running a small market and raising their three children.

“He wasn’t a citizen, but we felt sure that we could prove these charges Israel was trying to extradite him on were political, and Bulgaria wouldn’t extradite him in a political case,” Rani said, referring to rules set out by the Council of Europe’s conventions on extradition treaties.

His brother Ahmad held a similar view. He said Omar had planned to stay in the embassy until it was proven that the charges against him were political, and then return to normal life with his family.

While Israel has denied any involvement in Omar’s death, and media reports first implied that he’d committed suicide, Ahmad said he couldn’t believe any narrative that didn’t conclude wih an Israeli assassination.

“My brother was assassinated. I think that the situation is very clear, so we are hopeful that there won’t be any more games,” Ahmad said.

His wife said Omar was devoted to their family and it was impossible that he would have willingly left their children.

“Any moment he wasn’t at work he spent with me and our three kids,” Rania said. “He made sure to pass our culture on to them. His family and culture were everything.”

Omar was also a leader in peaceful Palestinian solidarity activism in Bulgaria, something in which he was happy to involve their three children. His 18-year-old daughter Diana has been a part of a traditional Palestinian dance team, dancing dabka since she was young and continuing to perform today.

“He was so supportive of Diana’s dancing, and of all our children,” Rania said. “He was a great father.”

‘Something weird is going on’

While his family mourns Omar’s death, they are also in what they see as a fight for the truth, as the odd case takes many twists and turns.

“So far, we’ve seen three or four versions of the truth,” his brother Ahmad told MEE. “For sure, something weird is going on.”

The official autopsy on Omar’s death has yet to be released, though the Bulgarian prosecutor, Sotir Tsatsarov, announced earlier this month that preliminary reports indicated Omar was most likely not murdered.

“Just a few days ago, Bulgarian police told his wife and reported verbally to our lawyer, with two witnesses present, that Omar had been severely beaten on his back,” Ahmad told MEE, hours after the prosecutor’s announcement. “They’re playing with the report, and we are struggling against super powers, between the Bulgarians and the Israelis and the collaborators.”

Ahmad said that if the final autopsy report comes back ruling Omar’s death as anything less than murder, he and other family members plan to have private Palestinian doctors reexamine the body and take the case to the International Criminal Court.

He is also calling on the Palestinian Authority to hold the embassy staff accountable for Omar’s death.

A spokesperson for Taysir Jaradat, the Palestinian Authority’s deputy minister of foreign affairs, said no comment could be made on the case until the Palestinian president’s special committee’s investigation was completed, and no details were available on when that might be.

Hassan Brijiya, a spokesperson for the Popular Front for the Liberation of Palestine (PFLP), a political faction of which Omar was a member, said they hold the entire Palestinian leadership accountable for the “assassination”.

According to Brijiya, the PFLP has held a number of meetings to discuss the case and how to move forward if the Palestinian government doesn’t hold the embassy accountable.

Omar’s brother said they have three siblings living abroad who are terrified that “Israel can get to anyone, at any time”.

“For us this is an easy, obvious case,” Ahmad said, “but the Bulgarian side and everyone else seems to be doing their best to ignore facts on the ground.”

Most of all, Ahmad said, Omar’s family hopes for justice in his death so they can properly mourn their loss. Inside Israel
Death of Palestinian exile in Bulgaria shrouded in mystery Inside Israel
Israel accused of 'assassinating' Palestinian exile in Bulgaria 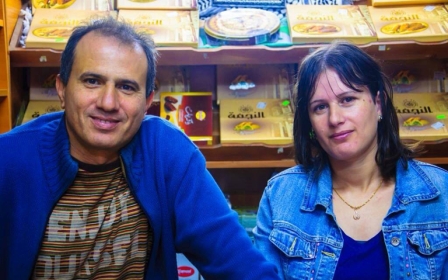